In the clearest sign of a breakthrough in discussions, Number 10 has said talks are progressing “more intensively than before” between David Frost and his EU counterpart Michel Barnier. The EU negotiator is due to brief officials in Brussels next Tuesday and Wednesday and according to BBC Political Editor Laura Kuenssberg the meeting had been cancelled – prompting speculation a deal could be on the brink. 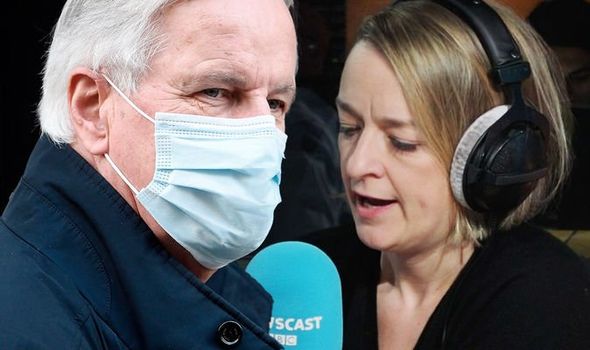 However, Brussels sources have since insisted the summit of the EU27 will go ahead as planned.

In a post on Twitter, Ms Kuesnssberg wrote:  “Barnier has cancelled briefings to EU side – planned for Tues night and then Weds lunchtime – only a hint, but perhaps a good sign that negotiators are churning through the obstacles to a deal, working not briefing.

“Interesting little hint, and these are crucial days, but far from clear that a deal is going to be done.”

She added: “Caution from UK side – ‘Both sides are negotiating more intensively than before, but significant differences remain. We may not get there’.”