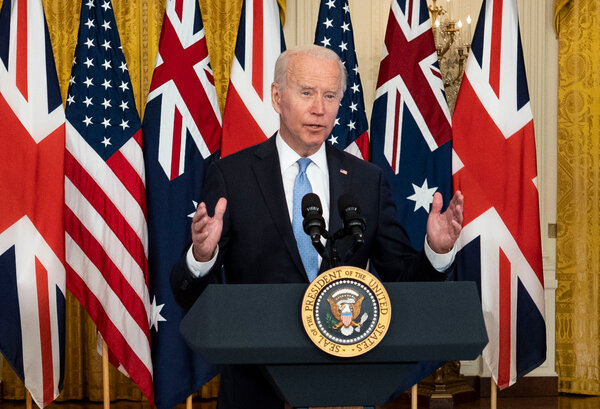 WASHINGTON — The Biden administration took a major step on Wednesday in challenging China’s broad territorial claims in the Pacific, announcing that the United States and Britain would help Australia to deploy nuclear-powered submarines, adding to the Western presence in the region.

If the plan, announced on Wednesday by President Biden, Prime Minister Boris Johnson of Britain and Prime Minister Scott Morrison of Australia, comes to fruition, Australia may be conducting routine patrols that could sail through areas of the South China Sea that Beijing now claims as its own exclusive zone, and range as far north as Taiwan. The announcement is a major step for Australia, which until recent years has been hesitant to push back directly at core Chinese interests.

“This is about investing in our greatest source of strength, our alliances and updating them to better meet the threats of today and tomorrow,” Mr. Biden said. “It’s about connecting America’s existing allies and partners in new ways.”

Australia has felt increasingly threatened, and three years ago was among the first nations to ban Huawei, the Chinese telecommunications giant, from its networks. Now, with the prospect of deploying a new submarine fleet, with nuclear propulsion systems that offer limitless range and run so quietly that they are hard to detect, Australia would become a far more muscular player in the American-led alliance in the Pacific. And for Mr. Johnson, the new defense arrangement would bolster his effort to develop a new “Global Britain” strategy that focuses on the Pacific, the next step after Brexit took the country out of the European Union.

American officials said Australia had committed never to arm the submarines with nuclear weapons; they would almost certainly carry conventional, submarine-launched cruise missiles. Australia is a signatory to the Nuclear Nonproliferation Treaty, which bans it from acquiring or deploying nuclear weapons. Yet even conventionally armed submarines, manned by Australian sailors, could alter the naval balance of power in the Pacific.