WASHINGTON (Reuters) – With the dramatic winnowing of the Democratic presidential field, the 14 nominating contests held on Tuesday largely came down to a single question: Could former Vice President Joe Biden amass enough delegates to slow Senator Bernie Sanders’ path to the nomination?

As polls closed in the eastern United States, the emerging answer appeared to be “Yes.” Polls showed Biden, whose candidacy was buoyed this week by a wave of high-profile endorsements after his South Carolina victory on Saturday, outperforming expectations.

The Super Tuesday contests offer the biggest one-day haul of the 1,991 delegates needed to win the party’s nomination at its national convention in July, with about 1,357 delegates, or nearly one-third of the total number, up for grabs.

Here are some initial takeaways from Super Tuesday voting.

BIDEN UP, BUT BLOOMBERG A THORN

Sweeping through the South, Biden appeared to be on course for decisive wins in Alabama, Arkansas, North Carolina, Oklahoma, Tennessee and Virginia, victories powered largely by his appeal to African-American voters – a key Democratic constituency.

But Biden’s effort to amass more delegates than liberal front-runner Sanders was being hampered by fellow moderate and former New York Mayor Michael Bloomberg, who was showing some strength in the South after being hammered by Biden early on in Virginia.

The Biden campaign worried that the billionaire media mogul could split the moderate vote and give Sanders an edge in the race for the delegates who will choose the Democratic presidential nominee.

For example, in Arkansas and Tennessee, Bloomberg appeared on pace to finish above the 15% threshold necessary to qualify for delegates, and early returns showed him hovering around that mark in several other states as well.

Even so, the outcome looked to be far from the resounding showing that Bloomberg, who spent more than $200 million on ads for Super Tuesday alone, was looking for. He is likely to face intensifying pressure within the Democratic Party to drop out of the race. 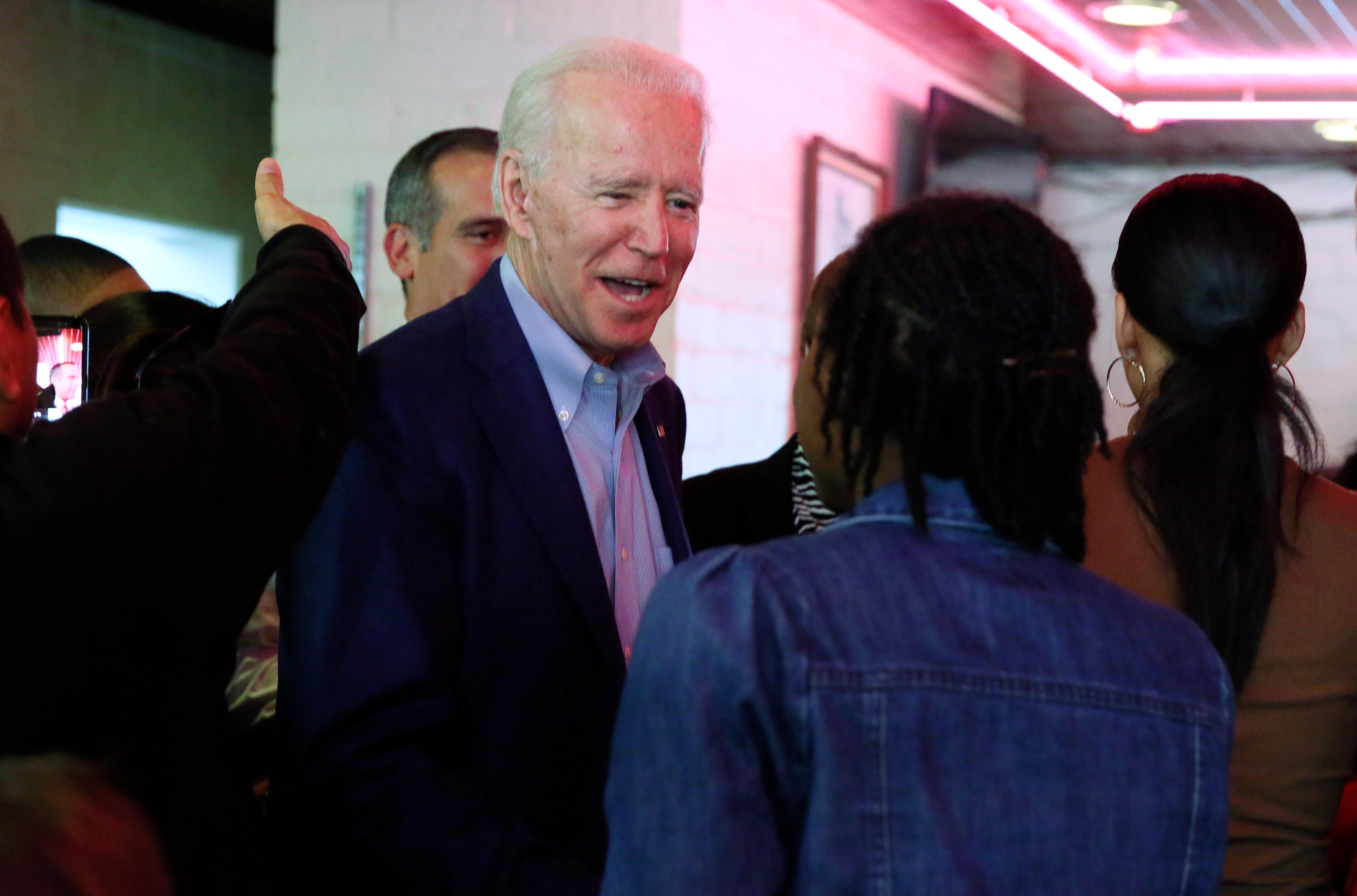 It appeared clear early on that Biden benefited from the last-minute endorsements from former presidential contenders Pete Buttigieg and Amy Klobuchar, as the Democratic establishment increasingly is coalescing around him as an alternative to Sanders, a self-described democratic socialist.

More critically for his chances, exit polls suggested Biden was building the broad coalition needed for a presidential nominee. Along with his long-standing popularity with African-American voters, Biden was showing strength with nonwhite voters without a college degree, a traditional Sanders strong suit.

Biden was also showing appeal to suburban voters in states such as Minnesota – another state he was projected to win – along with North Carolina and Virginia. Suburbanites have been leaning toward the Democrats since Republican President Donald Trump took office and are considered crucial in this year’s general election.

For Biden, the goal on Tuesday was to draw as near to Sanders in terms of overall pledged delegates to the Democratic National Convention as possible. Going into Super Tuesday, Sanders held a slight lead over Biden because of his success in earlier primaries, or nominating contests.

It remained unlikely that Biden would be able to pull even with Sanders. Still, a strong showing might slow Sanders’ momentum enough to allow Biden to catch him in upcoming primaries.

Delegates are awarded proportionally, so while Biden could celebrate wins in states such as Oklahoma and Tennessee, the fact that Bloomberg and Sanders could both finish above the 15% threshold in those states could limit his delegate haul.

Both Sanders and Biden will finish Tuesday with fewer than 1,000 each, still short of the 1,991 delegates needed to secure the nomination.

Sanders was projected to win Colorado and is expected to do well in California, which has the largest number of pledged delegates – 415.

The exit polls appeared to bolster Biden’s claim that he is best positioned to defeat Trump in November. 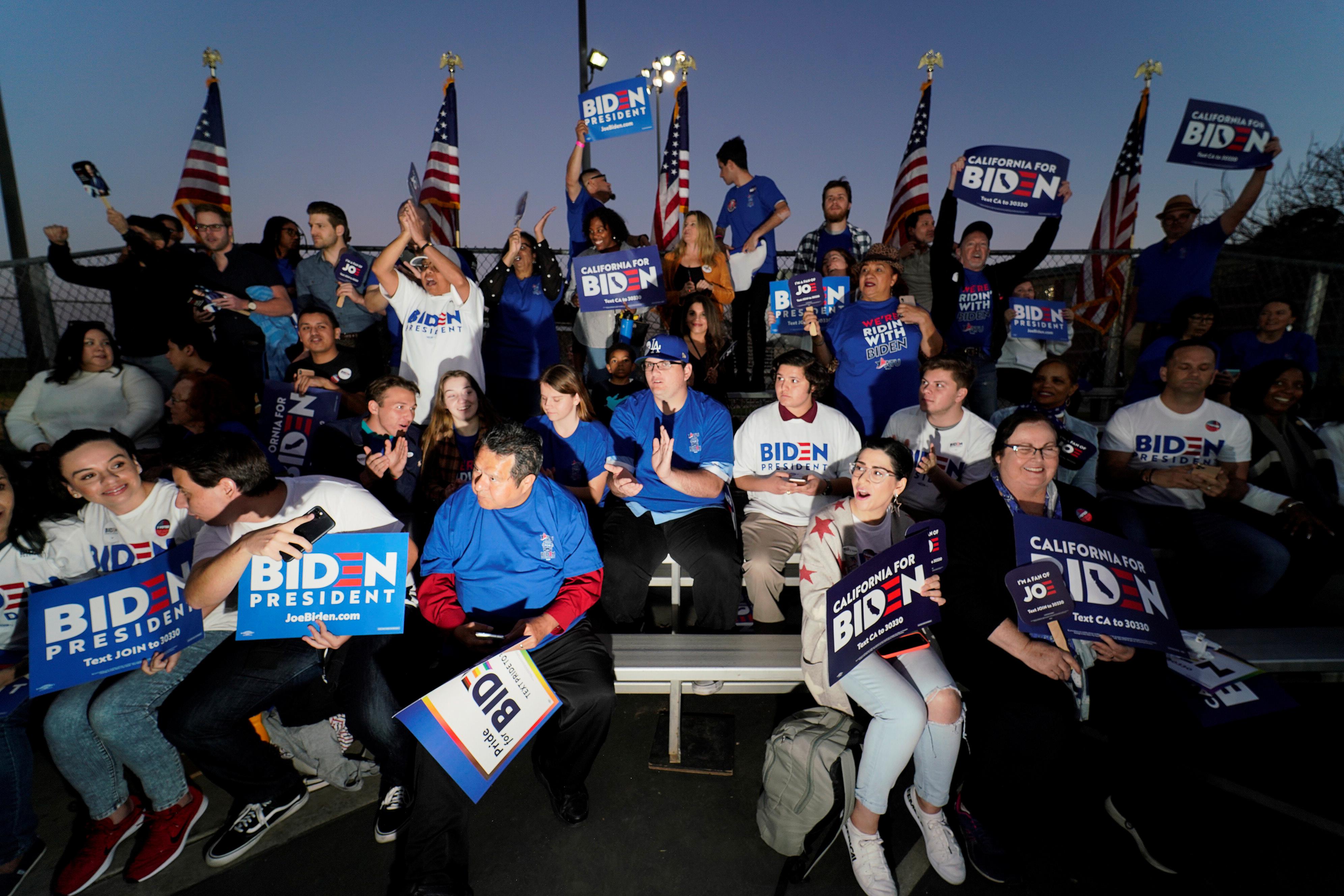 Polls from several states gave him a clear advantage over Sanders among voters who said they would rather have a nominee who can beat Trump than who agrees with them on major issues. In Virginia, for example, 64% of those who prioritized beating Trump backed Biden compared with just 16% for Sanders.

Such results appeared to suggest a growing belief within the party that nominating Sanders would hand Trump a second term.