WASHINGTON — The Biden administration is in the later stages of planning how to phase out a Trump-era public health rule that has allowed border agents to rapidly turn away most migrants who have arrived at the southern border during the pandemic, according to two administration officials. It is possible that in the coming weeks, border officials could start allowing migrant families back into the country, with an eye toward lifting the rule for single adults this summer.

The plan, while still not final, is sure to ​complicate an already thorny issue for President Biden and Vice President Kamala Harris, who is visiting the border on Friday as Republicans accuse the administration of being slow to address what they describe as an unrelenting surge of migrants trying to enter the country. Lifting the rule will only exacerbate that.

Since the beginning of the pandemic, border agents have turned away migrants nearly 850,000 times under the public health rule, known as Title 42, which immigration and human rights advocates call unnecessary and cruel, particularly for those seeking asylum. Migrant families have been turned away more than 80,000 times since the rule was put in place in March 2020, according to government data.

Mr. Biden, who has promised a more humane approach to immigration enforcement, decided not to continue the Trump administration’s policy of expelling children who arrived alone at the border. Single adults and many families, however, have continued to be turned away because of the public health rule, whose stated purpose is to prevent the coronavirus from spreading at points of entry or Border Patrol stations. Still, some migrant families have been allowed into the United States because Mexico or their home countries refuse to take them back.

Despite the measured approach, lifting the rule — which many public health experts say has little point this late in the pandemic — is likely to sharply increase the flow of migrants, at least in the short term. That would force Mr. Biden to address the issue without compromising his pledge to take a more compassionate approach to enforcing immigration laws.

Plans to lift the rule have been under discussion for weeks, but there appears to be a fresh sense of urgency; officials familiar with the evolving plan shared details with The New York Times on the condition of anonymity because they were not authorized to discuss it. Axios earlier reported some of the details.

For migrant families, the officials said, one idea under consideration is to put those seeking asylum into one of Immigration and Customs Enforcement’s alternatives to detention. That includes having them wear ankle bracelets as their request makes its way through the immigration system, a process that can take years because of a chronic backlog of cases. The administration has already been doing this for other migrant families this year.

The administration is considering placing families who do not make asylum claims in the queue for expedited removal, a process that allows immigration officers to deport people without a hearing, a lawyer or a right of appeal in some cases.

One official familiar with the plans said that all the ideas under consideration included health and safety measures to avoid the spread of the virus.

Lifting the public health rule for single adults is likely to come later, according to the most recent discussions, possibly by the end of the summer. Single adults have been barred from entering the country more than 262,000 times since the rule went into effect. The administration is still debating where these migrants would go once they enter the country, including whether to place them in expedited removal or in home detention so as to avoid a detention center, as Mr. Biden campaigned against mass incarceration of undocumented immigrants.

Representative Henry Cuellar of Texas, a senior Democrat on the House Appropriations Subcommittee on Homeland Security, said border officials had been bracing for an end to the public health rule and other pandemic restrictions, including a ban on nonessential cross-border commercial traffic that was recently extended until July 21. 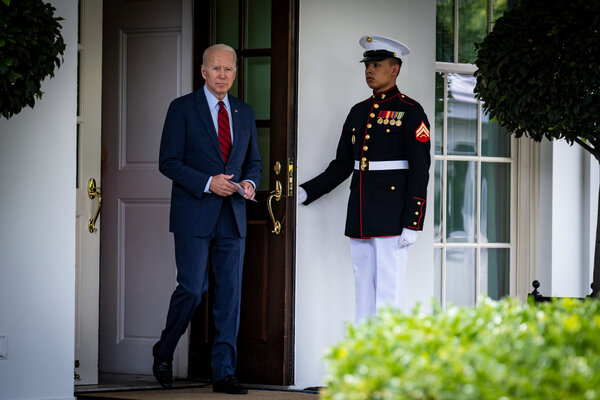 “That could be, according to them, ‘a perfect storm,’ because all of a sudden all those people will be coming into the U.S.,” Mr. Cuellar said.

The Biden administration is trying to avoid just such a storm with a phased-in approach.

Another challenge for the administration is that detention centers overseen by Immigration and Customs Enforcement are filling up, holding nearly 27,000 as of Thursday. That is a 90 percent jump compared with the average number of detainees in March, according to government data. If the administration lifts the health rule entirely, it would face the question of where to house the migrants, caught between significantly increasing the number of detained immigrants and releasing everyone to wait for court proceedings.

Lifting the public health rule for families, though, will make it hard for the administration to defend keeping it in place for single adults.

“This piecemeal approach doesn’t cut it,” said Denise Bell, a researcher for Amnesty International’s refugee and migrant rights program. “How many carve-outs until you have to admit there is no good public health rationale for Title 42?”

Lifting the public health rule could lead to some bottlenecks along the border, but it could also ease pressure on the Department of Health and Human Services, which is overseeing the care of unaccompanied migrant children who have been arriving in record numbers.

As of Thursday, about 14,500 such children were being held in government shelters, according to internal government data obtained by The Times, as officials try to place them with family members or other sponsors in the United States. Nearly half of the children are staying in emergency shelters where some conditions are far below government standards; the average stay is currently 37 days.

“When families were pushed back, sometimes they’d make that extraordinarily difficult choice to send their child ahead, with the hope that as an unaccompanied child migrating alone, they’d have a better chance of being accepted and processed through,” said Wendy Young, the president of a nonprofit, Kids in Need of Defense. “It’s a horrible choice that families have to make, but we did see families doing exactly that.”

Without the public health rule, families may again start trying to cross the border together — a better option, Ms. Young said, than being placed in the large emergency shelters overseen by the health and human services department.

Ms. Harris, who will travel to El Paso on Friday with Alejandro N. Mayorkas, the homeland security secretary, is leading the administration’s efforts to help improve conditions in Central America, where many of the children are coming from, to deter migration.

For weeks, Republicans have pressed Ms. Harris about why she traveled to Central America this month, but not to the American side of the border with Mexico. Her visit comes just days before Mr. Trump goes to the border with a group of Republicans, including Gov. Greg Abbott of Texas, who has pledged to finish Mr. Trump’s border wall in his state after Mr. Biden halted construction. Mr. Abbott has also threatened to kick thousands of migrant children out of shelters there.