By Glenn Thrush and Katie Rogers 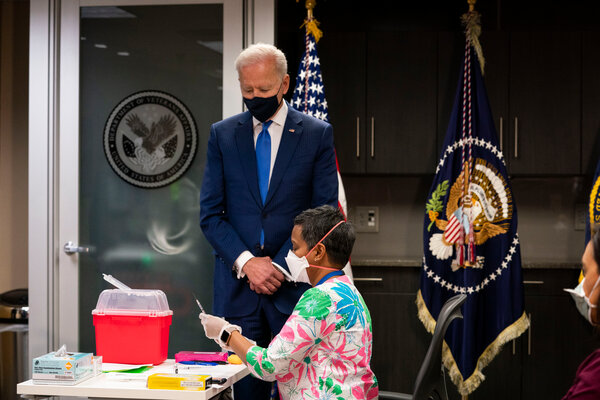 President Biden will deliver the first prime time address of his presidency on Thursday, marking one year since the adoption of sweeping measures to deal with the coronavirus pandemic, which subsequently killed nearly 525,000 Americans and battered the economy.

The president will deliver a direct-to-camera address to “discuss the many sacrifices the American people have made over the last year and the grave loss communities and families across the country have suffered,” Jen Psaki, the White House press secretary, told reporters on Monday.

Mr. Biden’s address comes a year to the day since the World Health Organization declared the spread of the coronavirus a pandemic and a year to the night since former President Donald J. Trump delivered an address on the virus from the Oval Office, after initially dismissing it as a minor problem that would go away on its own.

A national emergency declaration, which gave the White House flexibility to direct federal resources to efforts to fight the pandemic, was issued on March 13, 2020.

Mr. Biden’s speech will be forward-looking, Ms. Psaki said, and the president plans to highlight “the role that Americans will play” in getting the country “back to normal.”

Her comments came shortly after the Centers for Disease Control and Prevention recommended a slight easing of restrictions on people who have received vaccinations.

On Monday afternoon, Mr. Biden visited the Washington DC Veterans Affairs Medical Center, which has the capacity to administer hundreds of vaccinations a day, to discuss efforts to vaccinate veterans. On a brief tour, the president spoke with assembled Veterans Affairs officials, who explained how they prepared and administered vaccines.

The address is also timed to capitalize on a major political victory for the young presidency. Mr. Biden’s $1.9 trillion pandemic relief bill, which passed the Senate over the weekend, is likely to be adopted by the House on Tuesday. At the veterans center, Mr. Biden told the crowd that he’d sign the bill into law “as soon as I can get it.”

While Mr. Biden’s team has been cautious not to take a victory lap while so many Americans are suffering, he needs to take credit for its fast passage to gain the leverage needed for looming fights over other items on his agenda.

An ABC News/Ipsos poll released Sunday found that 68 percent of Americans approved of the way Mr. Biden is handling the crisis.