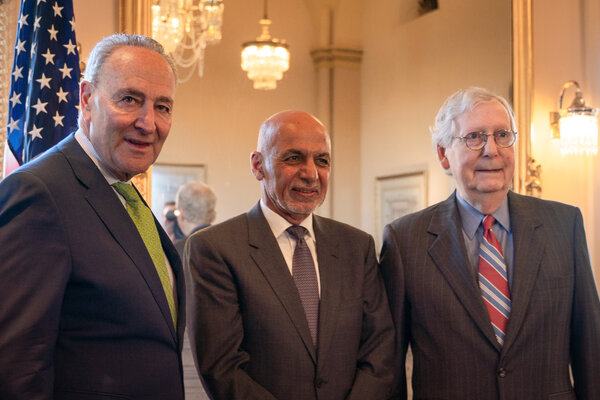 President Biden will meet with the Afghan president, Ashraf Ghani, on Friday afternoon at the White House to discuss ways to ensure a safe future for a country increasingly under threat by a violent insurgency amid the withdrawal of American and international military troops.

Mr. Biden will use the meeting, scheduled for 3:30 p.m., to assure the Afghan leadership that the administration will continue to support the country with security assistance, as well as diplomatic and humanitarian aid, even as the Taliban advances on Afghan government forces and sends the country further into a crisis.

Mr. Biden’s decison to pull out American troops by Sept. 11 is one of the most consequential of his presidency so far, a deeply personal calculation, “from the gut,” as one official put it. And despite the worsening security situation, gloomy intelligence reports, and the likelihood the White House will face terrible images of human suffering and loss, and possible civil war, in the coming weeks and months, Mr. Biden’s message remains clear, these officials say: The U.S. military is leaving.

“It won’t be a happy conversation,” said Michael Kugelman, deputy director of the Asia program for the Wilson Center, a think-tank in Washington. “While Kabul has accepted the fact that U.S. forces are leaving, it’s tough to swallow given that the withdrawal is playing out against an unprecedented Taliban offensive.”

In the meeting at the White House, Mr. Biden will assure Mr. Ghani with financial support, including a $266 million humanitarian assistance package and $3.3 billion in security assistance. The White House will also send three million doses of the Johnson & Johnson vaccine and oxygen supplies to Afghanistan, where efforts to help those suffering from a third wave of the coronavirus have been hampered by fighting in the area.