The former Northern Ireland Secretary, who served in the position for just seven months, lost his job as part of the Prime Minister’s Cabinet reshuffle following December’s emphatic general election victory. Mr Smith was dismissed from his role and replaced by Conservative Party chairman Brandon Lewis – despite being central in agreeing a landmark power sharing deal with Stormont. The agreement saw the return of power-sharing to the country after three years, and had been hailed by Mr Johnson as a “fair and balanced deal in the interests of everyone”.

But less than 24 hours before the Cabinet reshuffle, The Times reported Mr Smith’s job was on the line as the Prime Minister has been “blindsided” by the deal, which included an investigation into alleged crimes committed by British soldiers during the Troubles.

Writing in The Spectator, the sacked Northern Ireland Secretary rejected these claims, while also taking a thinly-veiled swipe at the Prime Minister and his special advisor Mr Cummings.

He wrote: “On Wednesday night the Times reported my expected fate, suggesting the reason for the chop was that Downing Street had been unaware of key details of the deal to restore Stormont.

“I was grateful for the opportunity to confirm to the journalist that a PM does not sign off a key government deal without reading it first, alongside a phalanx of talented PJ Masks aides.” 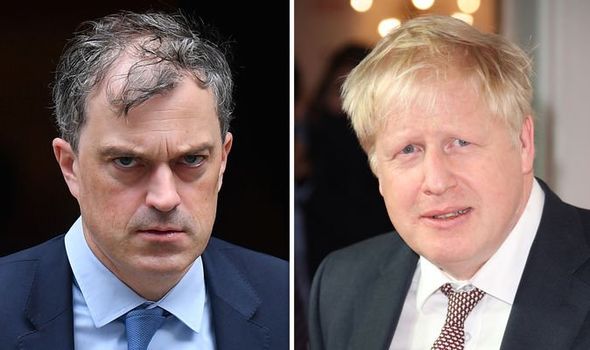 The reference to PJ Masks comes after the outspoken Mr Cummings had mocked the Cabinet by suggesting it could be replaced with characters from the children’s TV show.

The special advisor had bizarrely said just days before the Cabinet reshuffle: “PJ Masks will do a greater job than all of them put together.”

Mr Smith, who was appointed Northern Ireland Secretary when Mr Johnson was elected as Prime Minister last July, also suggested he was not surprised to lose his job.

The former minister also wrote in The Spectator: “My suspicions were raised by Tuesday.

My close protection apologised about the swap to a Skoda because the main car was in the garage; I received a fumbled brief about what would happen ‘should things go badly’ for me in the reshuffle; and finally, I could no longer reach the team on the normal phone due to ‘battery problems’.”

In a separate article for the New Statesman, Mr Smith also took a swipe at the Prime Minister’s plan to connect Northern Ireland to Scotland via a bridge.

Downing Street has said work is now “underway” on the multi-billion pound project.

But Mr Smith wrote: “Of course, like all well behaved former cabinet ministers, I would never express scepticism about visionary ideas such as the proposed bridge between Scotland and Northern Ireland.

“Underlying it is a commitment to infrastructure and innovation outside of London and the south of England that should be encouraged.

“However, the priority now must be decisive and cost-effective intervention in Northern Ireland’s roads, technology and, less glamorously, the country’s failing sewage system.”

Following his sacking, Mr Smith had praised Mr Johsnon, when he tweeted: “Serving the people of Northern Ireland has been the biggest privilege.

“I am extremely grateful to @BorisJohnson for giving me the chance to serve this amazing part of our country.

“The warmth & support from people across NI has been incredible. Thank you so much.”

Mr Varadkar, himself involved in a battle to maintain his grip on power in Ireland, tweeted: “In 8 months as Secretary of State, Julian you helped to restore powersharing in Stormont, secured an agreement with us to avoid a hard border, plus marriage equality.

“You are one of Britain’s finest politicians of our time. Thank you.”

Ms Foster also tweeted: “Spoke with @JulianSmithUK a short time ago to thank him for his help in getting devolution restored.

“We may not have always agreed (we did sometimes) but his dedication to the role was incredible.

“Best wishes to him and his family. Always welcome in Fermanagh.”