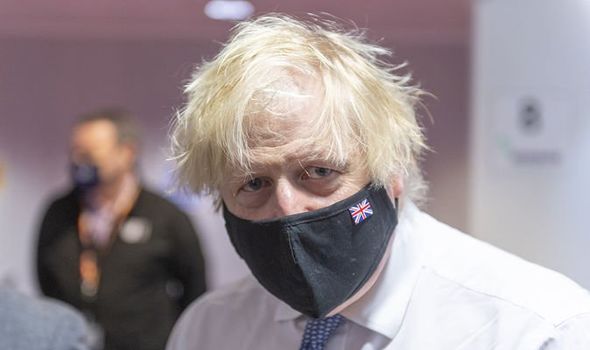 The Prime Minister urged people to enjoy New Year festivities in a “cautious and sensible way”. But he warned those still unjabbed that the vast majority in hospital intensive care units were not fully vaccinated.

Today marks exactly a year since UK regulators approved the OxfordAstraZeneca vaccine. However, around 2.4 million doublejabbed people are yet to have a booster.

Mr Johnson, who visited a vaccine centre in Milton Keynes, Bucks, yesterday, said: “I’m sorry to say this, but the overwhelming majority of people who are currently ending up in intensive care in our hospitals are people who are not boosted.

“I’ve talked to doctors who say the numbers are running up to 90 percent of people in intensive care who are not boosted.

“If you’re not vaccinated, you’re eight times more likely to get into hospital altogether. So it’s [being jabbed] a great thing to do. It’s very, very important.

“Get boosted for yourself and enjoy New Year sensibly and cautiously.”

There are no official NHS figures on the jab status of intensive care patients, but medics say the vast majority are either unvaccinated or have not had all their doses.

Mr Johnson defended his decision not to impose tougher Covid restrictions in England. He said: “We see the data showing that, yes, the cases are rising and, yes, hospitalisations are rising. But what is making a huge difference is the level of booster resistance or level of vaccine-induced resistance in the population.

“What we need to do now is really finish off that work. I’ve no doubt at all that by January 1, every adult in the country will have been offered the slot to get a booster.

“The question is, are we getting people coming forward? And that’s what needs to happen.”

An influx of New Year revellers from Scotland and Wales taking advantage of England’s looser Covid rules is expected. Mr Johnson urged: “Take a test, ventilation, think about others – but, above all, get a booster.”

Nearly 50 million doses have been given in the UK since the AstraZeneca jab was approved. The Government invested more than £88million to help research, develop and manufacture the vaccine.

About 2.5 billion doses have been distributed at cost to more than 170 countries. A furt dona further 20 million will be donated next year. Mr Johnson said: “Our fight against Covid in the UK and around the world would not have been possible without the Oxford-AstraZeneca vaccine.”

Health Secretary Sajid Javid said the AstraZeneca vaccine had been “absolutely pivotal” in helping save millions of lives around the world.

He said: “I’m incredibly proud of the role the UK has played in developing, researching and manufacturing groundbreaking vaccines and treatments during the pandemic.

“Vaccines are the best way to protect people from Covid-19 and I’m urging everybody to play their part in this national mission.” The latest NHS admissions data suggest 71 percent of Covid patients in England’s hospitals on December 21 were primarily being treated for the virus. The other 29 percent were there “with Covid”, suggesting they tested positive on arrival for another ailment or during their stay.

The United States has cut its Covid selfisolation period to five days if people are not showing symptoms. Current UK rules allow people to end quarantine after a week if they get negative lateral flow results on days six and seven.

But health chiefs warned against rushing to cut the isolation period, despite the impact it is having on staffing levels. NHS Confederation CEO Matthew Taylor said any decision to reduce it “would have to be based on very clear evidence” that it will not drive a rise in infections.

Mr Taylor said experts were still learning about the fast-spreading Omicron variant but so far, the news about its milder effect on hospital patients was good.

He said: “It seems as though they are suffering less bad symptoms and indeed, many people who have got Covid are not coming to hospital and it’s then been found out.

“But it’s also important to recognise hospitals are full of very vulnerable people and for those, even a relatively mild form of the virus can have serious consequences.” Mr Taylor said it was too early to say whether the decision not to step up Covid restrictions had been correct.

He added: “If the hospitalisation rate continues to rise at the rate that it’s rising at the moment, it’s going to potentially peak around the middle of January, traditionally the point at which demand on the NHS is at its greatest.

“The Government has to make a judgment about the balance of risk. That’s obviously not an easy thing to do, but we mustn’t underestimate the challenges facing the health service and mustn’t be complacent about what’s happening. Because at the moment, we still do not have a fully informed picture.”

A further 183,037 lab-confirmed Covid cases were recorded in the UK as of 9am yesterday. Fifty-seven people died within 28 days of testing positive.