In a video appeal, the Prime Minister insisted families and friends should meet only outdoors within the rule of six or two households limits to be safe from the virus. Mr Johnson’s plea came as fresh signs emerged yesterday that the vaccination rollout is curbing the pandemic. Figures showed the UK’s daily virus cases have nearly halved in a week to their lowest level in almost seven months and new infections shrinking by about four percent a day.

The “R” infection rate in England is estimated at between 0.8 and 1, which means transmission is slowing.

There were 3,402 positive tests recorded yesterday, the fewest infections in a 24-hour period since the 3,395 on September 17.

And an expert predicted the UK will not suffer a third Covid wave on the scale of the outbreaks sweeping across Europe.

Linda Bauld, professor of public health at Edinburgh University, said: “I think we are in a very different position for two main reasons.

“The first one is that they ­are dealing with the B117 [variant] which unfortunately we exported to them and caused us huge challenges – still does – but much more in the winter. 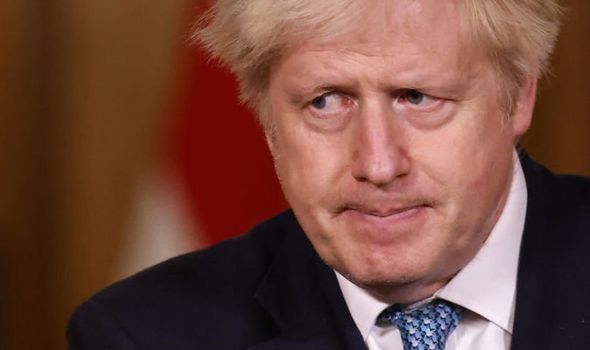 “More importantly, 11.6 percent of citizens in the EU on average have been given their first dose of the vaccine – that’s all people, not just all adults – compared to over 40 per cent of people in the UK.”

Responding to a query about whether friends and family can meet indoors if they are vaccinated, Mr Johnson told an online Q&A session: “I am afraid the answer is no because we’re not yet at that stage. We’re still very much in the world where you can meet friends and family outdoors under the rule of six or two households.

“And even though your friends and family members may be vaccinated, the vaccines are not giving 100 percent ­protection and that’s why we just need to be cautious.”

Mr Johnson said organised sport was allowed for “as many people as you like”, although kickabouts and other informal outdoor games were limited by the rule of six.

He added: “And you know, the weather is fantastic, I do hope people get outside, enjoy it and play sport, get fit. That’s one of the things we need to do if we’re going to build long-term resilience to Covid. I am afraid we all need to get fitter. And speaking entirely personally, I’m looking forward to playing some sport myself.” 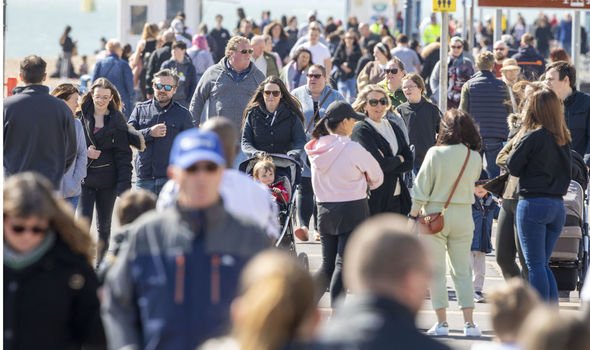 Mr Johnson also insisted the Government was on track to ensure second vaccination doses were delivered on time.

Police chiefs warned Easter revellers not to “mess this up” as Asbo-style bans were imposed in cities and towns.

They say they will make “no apology” for a tough approach to avoid scenes seen this week.

Drunken revellers clashed with officers in Cardiff, 100 youths ran riot in Liverpool and a brawl erupted on London’s Primrose Hill after a knifeman charged at crowds. Essex Police Chief Constable Ben-Julian Harrington said the last 12 months had been “incredibly tough” on families and friends kept apart.

However, he said: “But if you spot clear and blatant breaches of Covid-19 regulations, you can contact us. We will respond.

“So please, let’s not mess this up now.”