They are seen as first steps in a counter offensive to thwart SNP leader Nicola Sturgeon’s push for a second Scottish independence vote. Mr Johnson’s plans come as a boost to the Daily Express Unite The Kingdom crusade, making the case for strengthening ties within the UK. Lawyers have also been ordered to prepare to fight in court any attempt by the SNP to call a referendum without the consent of the UK Government. It comes amid fears nationalists could win a Scottish Parliament majority this week.

Mr Johnson will chair a Downing Street meeting of senior Cabinet ministers including Michael Gove, the Cabinet Office minister, and Chancellor Rishi Sunak, to finalise how they will respond to Thursday’s vote.

A “Union connectivity review” by Sir Peter Hendy, the Network Rail chairman, is likely to recommend higher capacity and better journey times on train travel between England and Scotland, as well as major improvements to the A1(M).

Dominic Raab, the Foreign Secretary, has ordered diplomats to make the case for the UK overseas.

Ministers are also looking at using the new Turing scheme – which replaced the EU’s Erasmus programme – to pay for students to study in different parts of the UK. 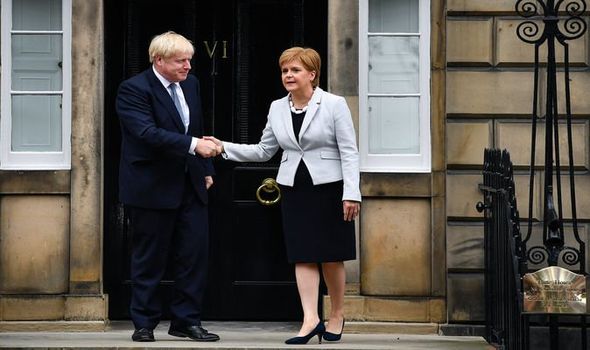 Matt Hancock, the Health Secretary, is working on plans to help the NHS in Scotland, with a backlog caused by the Covid crisis, to treat patients in England.

But he told BBC One’s The Andrew Marr Show the biggest risk to its economy is a “referendum because Nicola Sturgeon has been unable to say what the currency would be or what the border would be”.