The Prime Minister said now the UK had left the EU, Britain was free to “defend our actions as well as our interests” on the world stage. Appearing over video link from No10, he listed the how the country was already taking a lead on issues of human rights abuses abroad.

Addressing the conference in the final speech of the day, he said: “For the first time in nearly 50 years we now have the power to impose independent national sanctions, allowing the UK to act swiftly and robustly.

“Our first decision was to create a Magnitsky regime to punish human rights offenders.

“The UK then became the first country to sanction senior figures in Belarus after the stolen election. We’ve now imposed sanctions on over 50 human rights violators including from Russia, Myanmar and Zimbabwe.

“We have consistency spoken out against China’s repression of the Uyghurs people in Xinjiang province and will continue to do so. We’ve introduced new measures to ensure supply chains of UK companies are not tainted by the violations in Xinjiang. 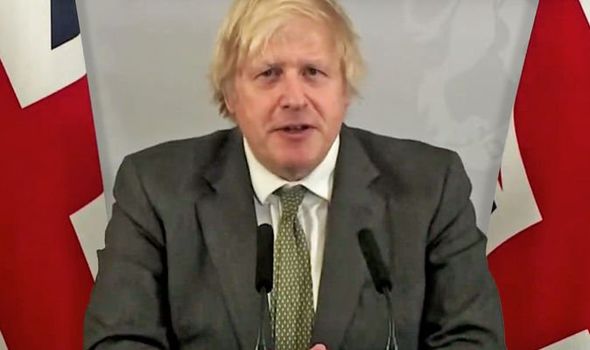 “After China broke a treaty and imposed a repressive national security law on Hong Kong, the UK offered nearly three million of the territory’s people a route to citizenship. We acted quickly, and willingly – with cross-party support at home – to keep faith with the people of Hong Kong.”

The Prime Minister also used the speech to re-commit the UK to Nato saying Britain’s defence spending would rise by £24billion over the next four years.

Mr Johnson said the amount meant the UK was “comfortably exceeding” the pledge by members of the alliance to invest two percent of GDP on the issue.

Taking a small dig at France and Germany, he added Britain had “the biggest defence budget in Europe and the second-largest in Nato, after the United States”.

Pushing the fact the UK was leading the way across the continent, he said: “When our allies on the eastern flank sought reassurance about their security, NATO responded by deploying a multinational force in Poland and the Baltic states and the UK was proud to make the biggest single contribution, leading the battlegroup in Estonia, showing that we mean it when we say that our commitment to European security is unconditional and immoveable.”