The Prime Minster’s office has insisted the UK will “comply with our obligations” under the deal but has repeatedly promised there will be no border checks on goods on the Irish border. Outgoing Irish Taoiseach Leo Varadkar warned Mr Johnson the Withdrawal Agreement is an international treaty and he expects the UK to “honour that in full”. This comes after the Sunday Times reported that officials in Taskforce Europe are seeking to evade Irish Sea checks on goods passing from Great Britain to Northern Ireland.

A spokesperson for the European Commission said on Monday: “The Withdrawal Agreement has been signed and ratified by both sides.

“So it has to be implemented — that includes the Northern Ireland protocol, of course.”

The EU General Affairs Council is set to meet this morning in Brussels to approve the bloc’s mandate for trade talks with the UK, which will start next month.

The announcement on Brussels’ agreed aims, which could be controversial after earlier drafts contained what Downing Street read as a reference to the Elgin Marbles, is expected in the afternoon.

In Westminster, the Brexit inner cabinet will also meet at Number 10 to discuss the UK’s negotiation stance.

The final agreement is then due to be published online and presented in Parliament on Thursday. 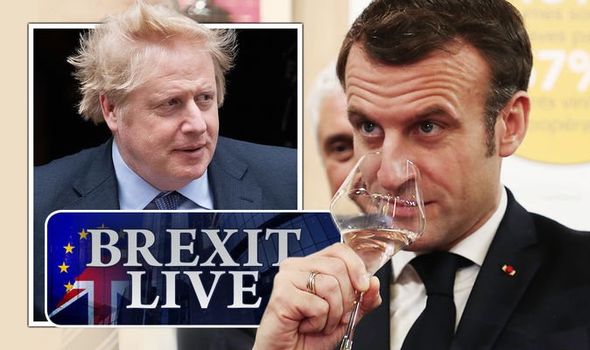 Ministers are expected to commit to seeking a Canada-style agreement with zero tariffs, a proposal Boris Johnson and his Europe adviser David Frost have set out in speeches in recent weeks.

But the push for a Canada-style deal could set up a clash with the EU after its chief negotiator Michel Barnier ruled out such an agreement.

Mr Barnier has previously said the UK is too close in proximity to be permitted to compete with the other 27 member states on such terms.

The Prime Minister’s official spokesman, asked about the trade talks on Monday, said: “The UK’s primary objective in the negotiations is to ensure that we restore our economic and political independence on January 1 2021.”

8.24am update: EU tries to block UK trade deal with US by banning chlorinated chicken

The EU is said to be preparing to demand the UK maintains its ban on chlorinated chicken as part of its mandate on the trade talks between the two.

A leaked document of the mandate has revealed a section called “Environment and health” says the EU will demand certain methods of food production not be used in the UK.

This includes the use of pesticides, endocrine disrupters or chlorine washes for poultry.

A sentence from the document, seen by the Guardian, says: “the envisaged agreement should uphold common high standards, and corresponding high standards over time with [EU] standards as a reference point”.

In a significant toughening of the Government stance ahead the talks on a future trade deal, officials said the Prime Minister is to make “taking back control” from the bloc and ending the meddling of EU courts his non-negotiable “red line”.

He will refuse to accept any deal that compromises the country’s “political and economic independence”, according to Whitehall insiders.

Number 10’s unequivocal warning comes ahead of a crunch meeting of EU ministers today to try to settle on chief negotiator Michel Barnier’s mandate for the trade wrangle due to begin next month.

7.31am update: Boris cosies up to Austrian Chancellor before EU-UK trade talks commence

The Prime Minister is expected to meet with Austrian Chancellor Sebastian Kurz in Numbe 10 on Tuesday as part of his diplomatic efforts with EU leaders before talks commence.

On Monday, Mr Johnson discussed the negotiations with Croatian counterpart Andrej Plenkovic, whose country holds the rotating presidency of the Council of the European Union.

Downing Street said the PM highlighted the UK was “not seeking a special or bespoke agreement, but rather one like those the EU has already struck with other friendly countries like Canada”.

The No 10 spokesman added: “He emphasised that the UK will not extend the transition period or accept any arrangements which subordinate us to EU rules.”