The beginning of the end of Brexit should take shape on January 1, 2020, as the country ideally leaves the arms of the EU with a deal defining their future diplomatic relationship. Negotiators on either side of the channel have pinned hopes on a final deal next week, with a potentially fraught path ahead without a plan, considering the global pandemic. Experts have now warned more than trade with the EU hangs in the balance when it comes to a Brexit deal, as progress could impinge on the health of the US-UK special relationship.

The special relationship bridging the Atlantic has existed for centuries, with the countries hailed as “cousins” due to their shared history.

Little has successfully endangered the unique connection since America won its independence, but Brexit could emerge as a nadir as Joe Biden prepares to inhabit the White House.

Experts believe he will pursue a closer relationship with Berlin and Europe over Britain, and the outcome of Brexit could drastically affect UK chances of a US trade deal. 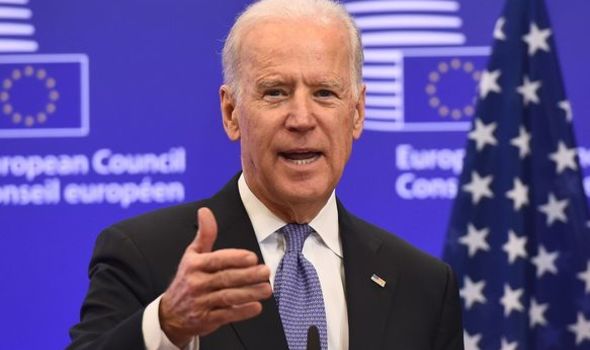 The now-approved Internal Market Bill infringes on the Withdrawal Agreement the UK agreed with the EU which set a trade border in the Irish Sea.

The WA provision which set the border, known as the Northern Ireland Protocol, also prevented a Good Friday Agreement-violating hard border between the north and south.

Passing the Internal Market Bill allows the Government to break international law and row back on the agreement, which has caused worries they could also endanger the GFA.

Here is where the UK could endanger its potential success with the US, as President-Elect Biden has pledged not to sign a deal if the Government breaks its promises for Ireland.

Writing in the London School of Economics (LSE) blog, Professor John Ryan, a fellow at LSE Ideas explained the future of the US’ relationship with the EU.

He stated any attempts to violate the GFA would cause “further strain” with an incoming Biden administration likely to focus on a relationship with mainland Europe.

He said: “A Biden presidency is likely to follow the lead of Barack Obama in making Berlin his primary relationship in Europe.

“German chancellor Angela Merkel and Merkel’s successor and France’s President Emmanuel Macron will be the main interest in a Biden White House.”

“If the UK leaves the EU without a deal, or with a deal that US politicians believe undermines the Good Friday Agreement, the peace deal that settled three decades of sectarian violence in Ireland, the relationship will come under further strain.

“Biden, who is proud of his Irish roots, has warned publicly he would make a trade deal contingent on respecting the Northern Irish peace plan.”

US politicians have pledged support for Ireland across the aisle, shooting down hopes the UK could secure a deal if it tries to modify the Withdrawal Agreement.

Professor Ryan added: “The US Congress has already made clear that they will veto any trade agreement they believe threatens the peace deal.”

He said the opposite is true, however, as the UK may end up in the US’ good grace if it handles the situation in Ireland well.

Professor Ryan concluded: “If the UK government during the final weeks of 2020 negotiate a deal with the EU, which preserves an open border on the island of Ireland, they will have the support of the new US administration.

“If Boris Johnson fails to conclude an agreement on the future relationship between the UK and the EU, and in those circumstances seeks to row back on the commitments already made in the Withdrawal Agreement, they will face hostility from Washington after January 20 2021.”

According to Joe Biden’s transition team, the President-Elect has already spoken with Mr Johnson about the Good Friday Agreement, cementing his commitment to keeping it alive.