In a phone call this afternoon, Lord Frost warned his EU counterpart wrangling over the future relationship pact won’t resume until the bloc agrees to discuss legal texts on a daily basis for the next two weeks. Their discussion comes after Boris Johnson walked out of the negotiations, leaving Brussels with one final opportunity to avoid a no-deal Brexit. A No10 spokesman said: “Lord Frost has spoken to Michel Bernier to update the EU on the Prime Minister’s statement.

“Lord Frost said that, as the PM had made clear, the European Council’s conclusions yesterday had left us without a basis to continue the trade talks without a fundamental change in the EU’s approach to these negotiations.

“There was accordingly no basis for negotiations in London as of Monday.

“He and Michel Barnier agreed to talk again early next week.”

Mr Barnier has proposed fresh negotiating rounds in London next week and then in Brussels the following week. 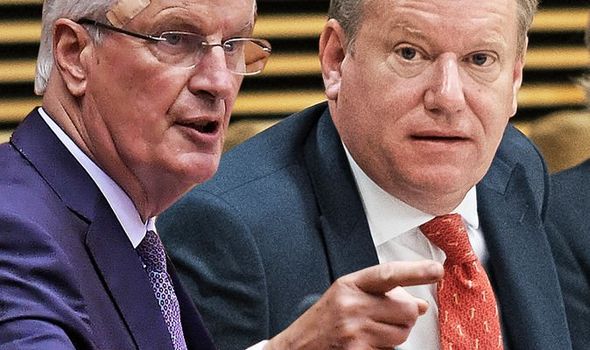 It is unclear whether the Brussels diplomat has offered his UK counterpart the necessary reassurances for the talks to go ahead.

EU leaders were left scrambling to mend the broken relationship after the Prime Minister’s statement.

Influential figures, including Angela Merkel, vowed to compromise in future wrangling with Britain over a free-trade agreement.

The German Chancellor insisted the bloc is “ready to compromise” across the board, including on future access to Britain’s fishing waters and a regulatory level-playing field that signs the two sides up to common standards.

She claimed she would accept the UK diverging from the EU’s rulebook as long as Brussels has the ability to “react quickly” to unfair competition.

She said: “We also need to be ready to compromise. If we want an agreement, then both sides need to make a move toward each other.”

He said: “We’re ready to compromise. We will not get what we want 100 percent – that’s impossible in a negotiation, you always have to find a compromise.”

But Emmanuel Macron, who earlier this week convinced EU leaders to oppose intensified talks, was still clinging on to his hardline positions, especially on fisheries.

The French President insisted Britain “needs a deal more than we do” and said the talks are “stumbling over everything” not just fish.

He ranted: “It’s not the job of the leaders of the 27 countries who have decided to stay in the EU to keep the British Prime minister Happy.”

Mr Macron has spooked European governments with threats to pursue a no-deal Brexit unless French boats have their access to the English Channel preserved.

While showing no signs of backing down, the French President conceded an Australian-style arrangement would be a “win” for British fishermen.

He said: “If there is no deal, European fishermen will have no access to British waters whatsoever. That is the reality.

“If there is a deal, will the situation be the same as it is today? No, that’s for sure.”