The two nations have objected to the European Union coronavirus recovery fund sparking the fury of EU leaders across the bloc. But French MEP Nicolas Bay defended Poland and Hungary’s right to “refuse the demands of globalists” as he blasted Brussels’ “obsession with punishment”. Mr Bay said he would “salute the consistency of Hungary and Poland” adding the two countries’ governments have the “right to decide for themselves and remain themselves”.

He accused EU chiefs of “using the rule of law in a vague way” and of aiming at “centralisation and uniformity” rather than championing the diversity of the bloc.

“Hungary and Poland should stand firm” against Brussels’ “constant blackmail”, he continued.

The furious rant came in response to German MEP Manfred Weber who blasted Hungary and Poland’s veto against the funds.

Mr Weber said: “The corona and the MFF funds, we’re talking about billions of euros, this shows solidarity, we need to move forward with this and this veto from Hungary and Poland is quite simply irresponsible.

“We managed to heal the divisions that appeared in the European Council in July. 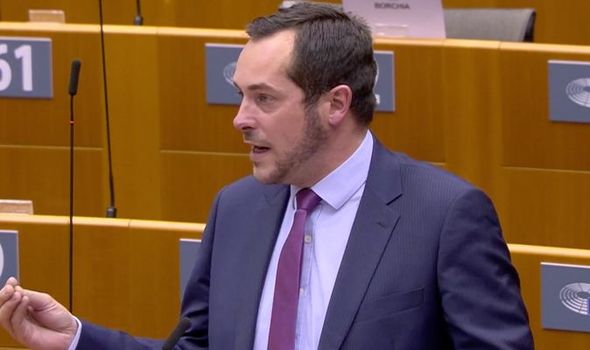 “At that time the Council wasn’t in a position to adopt an agreement.

“I’d like to thank our team because without the European Parliament we wouldn’t have this mechanism in place.

“And I want to discuss things with Hungary and Poland, because for example, this idea that Europe is trying to organise how abortion should be carried out in Poland is quite simply a lie.

“Abortion is a national competence. So let’s not hear these arguments that are simply untrue.

“And then secondly, when we hear that this proposal isn’t in line with the Lisbon Treaty as Mr Orban says, I say I see that differently.

“Let’s take it to the Court of Justice and see who is correct.

“That’s how Europe functions, not with a veto.”

A dispute over the European Union’s recovery fund and budget will eventually be resolved, Hungary’s prime minister said on Friday, as a senior official in Warsaw said Poland had the right to demand a “new compromise” over the deal.

The nationalist governments of Hungary and Poland have refused to back the bloc’s financial plan, even though they are beneficiaries, because the money is conditional on respecting the rule of law.

“The talks should be continued and in the end we will come to an agreement, that’s how this usually goes,” Hungarian Prime Minister Viktor Orban told state radio.

He said there could be several options for resolving the deadlock “that are acceptable to Hungary and Poland … where legal aspects decide and not a political majority”. He gave no details.

The Polish and Hungarian veto is likely to delay hundreds of billions of euros in EU funds at a time when the 27-nation bloc is grappling with a second wave of the coronavirus, with its economy likely to shrink in the last three months of the year in a double-dip recession.

The two countries are under EU investigation for undermining the independence of courts, media and non-governmental organisations, and they risk losing access to tens of billions of euros.

Krzysztof Szczerski, the Polish president’s chief of staff, said his country had the right within the European policy framework to refuse to agree to “what is wrong”.

“We have the right to seek and demand a new compromise,” he told public broadcaster TVP Info.

Orban, whose government issued a eurobond this month, said that irrespective of the current political debates over EU funds, “all the development projects Hungary planned for the next 10 years would be carried out.”

Hungary’s economy – which has been to a great extent dependent on EU funds – is in a deeper-than-expected recession due to the coronavirus and the rebound next year will also be slower than previously anticipated, according to analysts and the government’s own forecast.