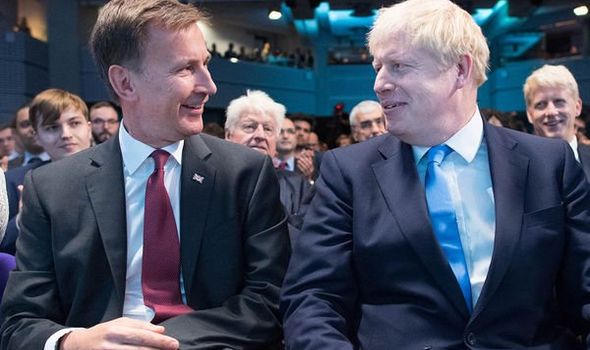 Five Cabinet ministers are understood to be resisting his blueprint for increasing the levy by one percent, with the aim of raising £10billion more a year to improve support for the frail, elderly and vulnerable. Last night a backlash was growing among Tory backbenchers and business leaders. But senior Tory Jeremy Hunt has urged Boris Johnson to “bite the bullet” and go ahead with the tax hike.

The former health secretary, who is chair of the Commons Health and Social Care Committee, said: “I think the number one priority of the electorate is to have good health and care services, and I think they understand that those pressures, irrespective of the pandemic, are only going to increase in the years ahead.”

Health Secretary Sajid Javid has been pushing for an even higher tax rise, warning that a one percent NI rise would not plug the social care and NHS gaps left by the pandemic.

But his aides yesterday denied he demanded a two percent increase in the levy paid by around 25 million people.

Mr Javid’s view has put him at loggerheads with Chancellor Rishi Sunak, who is against any NI increase above one percent.

He and other Cabinet ministers opposing a rise are arguing that younger workers should not have to fund care for the elderly.

Former Cabinet minister John Redwood warned: “Breaking election promises of no increases in NI or income tax is a bad idea”, and suggested an “insurance scheme for elderly care costs which people can opt into” as an alternative.

Mike Cherry, of the Federation of Small Businesses, called the levy “regressive”, and said: “Breaking a manifesto promise by increasing NI just at the moment when firms are struggling to get back on their feet would be devastating for small businesses and local communities.

“NI acts as a jobs tax, making it harder for small firms to provide opportunities and invest to improve productivity. If this hike happens, fewer jobs will be created by the UK’s small business community in crucial months ahead.”

Mr Hunt admitted the amount of money needed to fund health and social care was “eye-watering” and suggested it should be raised by tax, not National Insurance.

He explained: “I think that’s a better route than NI which is not paid by working pensioners. I think since older people are the biggest beneficiaries of this extra investment it’s fair that they should make a contribution.”

Responding to the plans, Mike Padgham, chairman of the Independent Care Group, said a tax rise must be “only the very start” and be part of a system overhaul, including tackling the staffing crisis.

Nick Sanderson, chief executive of Audley, which runs retirement villages and provides home care, said a “welcome cash injection” is not a long-term fix: “We need to see a systematic shift in thinking which reduces the need for care in the first place. Independence and keeping people out of care homes for as long as possible, if not forever, must be prioritised over propping up a broken system.”

Len Shackleton, editorial and research fellow at the Institute of Economic Affairs, slammed the plans for an NI rise, saying: “Many younger workers were knocked sideways by the pandemic. Now the Government is proposing a hike in NI contributions that will hit this group hardest.

“It is absurd that those over state pension age with substantial incomes and assets should not pay part of this burden because they are not liable for NI contributions.

“As for Employer NI, this is a crude payroll tax which discourages employment at the margin, and over time is passed onto workers in the form of lower pay.”

Rachel Harrison, GMB union national officer, said any additional money must be ring-fenced to improve the pay of carers.