Ronald Reagan compares Russia to a bear in 1984 TV campaign

A spokesman for the Grosvenor Estate, which looks after the property of the family of the Duke of Westminster, said: “The statue is currently the responsibility of Qatari Diar (developer of the ex-US Embassy). They have removed it as they are doing major public realm works. It is in storage and will be returned when they open up the area again post works. This is conditioned under their planning consent.” Qatari Diar, the company redeveloping the former US Embassy into flats, has not responded to press inquiries on the issue.

But MPs are now leading calls for the statue to have a new home in Parliament Square alongside other giants of British and international history who stood up for freedom and defeated tyranny including Winston Churchill.

They argue that since the US Embassy moved to Nine Elms south of the river in January 2018 the statue lost its significance in Grosvenor Square.

“It made sense that his statue stood proudly on Grosvenor Square. But now the Americans have moved their embassy to Nine Elms and the old embassy site is becoming flats, it would be fitting to relocate his statue to a prominent position in London where it can be admired by visitors from across the globe. It cannot be hidden away from public view.

“I believe Parliament Square would be a more appropriate location to place him.”

Wakefield Conservative MP Imran Khan, who previously worked for the United Nations and chairs the All Party Parliamentary Group for Foreign Affairs in Westminster, also backed the proposal. 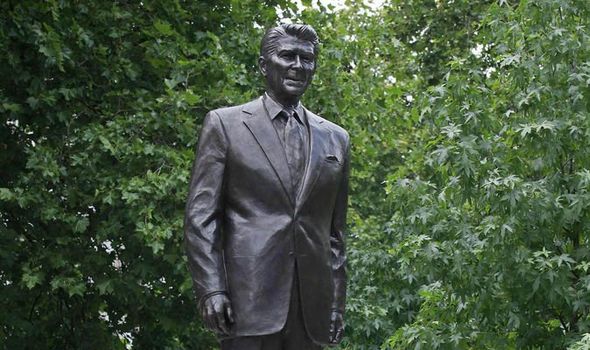 He said: “Ronald Reagan together with Margaret Thatcher demonstrated to the world the unbreakable bonds that bind the UK and USA being two great nations forged from a single ideas-based civilisation built on the same bedrock and from the same everlasting stone of freedom, democracy and the rule of law.

“Together they defeated the menace of communism and the fear of imminent nuclear Holocaust and reintroduced to their economies and societies aspiration, enterprise, freedom and self belief.

“It would be only fitting for a true friend of the United Kingdom to be honoured on Parliament Square in the company of Britain’s other freedom loving friends Lincoln, Ghandi and Mandela.”

The proposal has also had backing from Sarah Elliott, director of Republicans Overseas UK, who described it as “a brilliant idea” and symbol of the strong relationship between the UK and US.

The statue was unveiled in 2011 in Grosvenor Square to mark the birth of Mr Reagan whose presidency led to the defeat of the Soviet Union and Communist regimes in Europe.

The unveiling event at the time was attended by 2,000 guests who listened to remarks by British Foreign Secretary William Hague, former US Secretary of State Condoleezza Rice, and the then US ambassador, Louis Susman.

In 2018 an Express crusade was launched after the statue was neglected following the US Embassy moving allowing it to be covered by overgrown plants which led to calls three years ago for the statue to be relocated to Parliament Square.