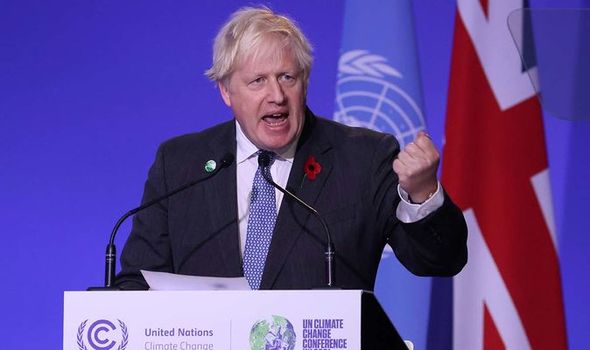 In a hard-hitting speech to open the COP26 summit, Boris Johnson said we have the technology to go green but now need the political will to match.

He told his powerful audience that billions of young people around the world were watching their negotiations over the next two weeks on limiting greenhouse gas emissions.

He said: “Let us think of the billions more of the unborn whose anger will be all the greater if we fail – we cannot let them down.”

He added: “We must not fluff our lines or miss our cue because if we fail they will not forgive us.

“They will know that Glasgow was the historic turning point when history failed to turn.”

He deployed 007 as a metaphor for the last ditch battle to prevent catastrophe.

The PM said Bond films came to a climax with the hero “strapped to a doomsday device desperately trying to work out which coloured wire to pull to turn it off while a red digital clock ticks down remorselessly to a detonation that will end human life as we know it”.

Mr Johnson said: “We are in roughly the same position, my fellow global leaders, as James Bond today except that the tragedy is that this is not a movie and the doomsday device is real and the clock is ticking.”

He added: “We may not feel much like James Bond, not all of us necessarily look like James Bond but we have the opportunity, the duty, to make this summit the moment when humanity began – and I stress began – to defuse that bomb.

“And make this the moment when we began irrefutably to turn the tide and to begin the fightback against climate change.”

At the core of the COP26 mission is for the world to achieve net zero – offsetting the damage from greenhouse gases – by 2050. India’s Prime Minister Narendra Modi said his country would meet a target of net zero emissions by 2070.

He also pledged that India will get half of its energy from renewable resources by 2030.

Outlining the threats posed by rising temperatures, Mr Johnson said: “Two degrees more and we jeopardise the food supply for hundreds of millions of people as crops wither, locusts swarm.

“Three degrees and you can add more wildfires and cyclones – twice as many of them, five times as many droughts and 36 times as many heatwaves.

“Four degrees and we say goodbye to whole cities – Miami, Alexandria, Shanghai – all lost beneath the waves.”

The Prime Minister added: “The longer we fail to act the worse it gets and the higher the price when we are eventually forced by catastrophe to act because humanity has long since run down the clock on climate change.”

Mr Johnson insisted the world had “the technology to deactivate that ticking doomsday device”.

He said: “We can phase out the use of cars with hydrocarbon internal combustion engines – by 2035 – we in the UK are ending new sales by 2030.

“We can end the use of coal fired power stations – we can do it by 2040 in the developing world and 2030 in the richer nations “We can plant hundreds of millions of trees – a trillion -it’s not technologically difficult and halt and reverse deforestation by 2030.”

He added: “As we look at the green industrial revolution that is now needed – around the world.

“We in the developed world must recognise the special responsibility to help everybody else to do it.”

Mr Johnson described COP26’s home of Glasgow as “the very place where the doomsday device began to tick” because of its heritage as the birthplace of the coal-fired steam engine.

He said industrialised countries had a duty “to help the rest of the world to move to green technology.”

Government spending alone will not win the battle against climate change, he said.

“We in this room could deploy hundreds of billions, no question.

“But the market has hundreds of trillions and the task now is to work together to help our friends to decarbonise.

“We have the technology, we can find the finance – and we must.

“And the question for all of us today is whether we have the will.”