The SNP has called on Boris Johnson to “hit pause” on Brexit negotiations and seek an extension to the transition period to focus on the coronavirus pandemic.

To continue “hurtling” towards the transition deadline of 31 December 2020 during the COVID-19 outbreak would be irresponsible and “an act of economic and social self-harm”, SNP Brexit party spokeswoman Philippa Whitford said.

Talks with the EU will continue this week, with Cabinet Office minister Michael Gove co-chairing discussions via video conference as the two sides look at implementing what is in the Withdrawal Agreement after the transition period. 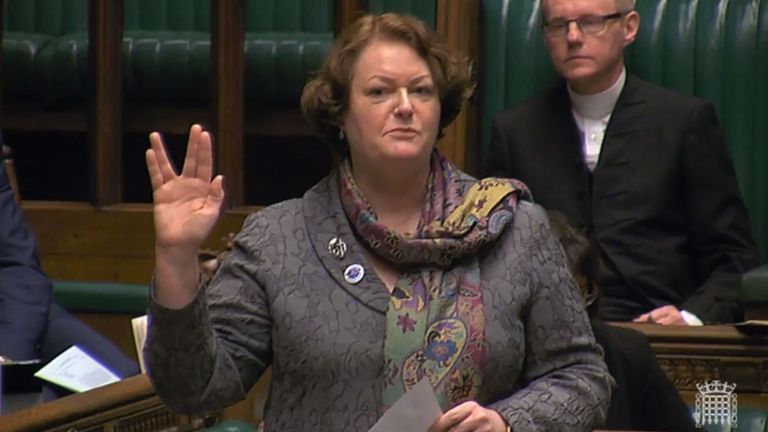 Dr Whitford urged the government to immediately seek an extension.

She said: “The COVID-19 outbreak has gripped us all – regardless of politics or borders – and it is vital that governments here in the UK and abroad work collaboratively to combat the pandemic.

“Businesses, individuals and households across the UK are already under intense pressure and financial strain in dealing with the crisis – with many losing their incomes and a significant number of businesses facing an uncertain future.

“It is impossible for businesses and others to prepare for life outside the EU while coping with the impact of the COVID-19 crisis at the same time, and many might struggle to survive the second blow of a hard Brexit at the end of this year.

“Continuing talks and hurtling towards the transition period deadline would be irresponsible and an act of economic and social self-harm.

“It is now vital that the UK government hits pause on all Brexit negotiations and immediately seeks an extension to the transition period to remove the uncertainty and instability.”

Scotland voted 62% to remain in the EU in the 2016 referendum and the SNP has been trying to forge a way for the country to stay in the bloc since then.

Downing Street has insisted it will not have to ask for the trade deal deadline to be pushed back.

The prime minister’s official spokesman said: “In terms of the timetable, there is no change from our point of view.”

In Scotland, the SNP government has postponed planning for another independence referendum in 2020 and Dr Whitford asked Westminster to do the same with Brexit to “focus on protecting our citizens and delivering financial support to everyone in society”.

A UK government spokesman said: “Our top priority as a government is to slow the spread of the coronavirus, protect the NHS and keep people safe – we are working around the clock to do so, with all four nations together providing unprecedented financial support for businesses, workers and the self-employed.

“We remain fully committed to the negotiations. Last week, the UK and EU shared draft legal texts and discussions with the commission are continuing.

“The transition period ends on 31 December 2020, as enshrined in UK law, which the prime minister has made clear he has no intention of changing.”