There will “definitely” be a role for vaccine passports for international travel, Boris Johnson has said.

In an acknowledgement that Britons who head abroad will have to show whether they have had a COVID jab, the prime minister noted how other countries and airlines were already looking into the issue.

“On the issue of vaccine certification, there’s definitely going to be a world in which international travel will use vaccine passports,” he said on a visit to Middlesbrough on Thursday.

“You can see already that other countries, the aviation industry, are interested in those and there’s a logic to that.”

And Mr Johnson also admitted that a similar COVID certification scheme – showing whether someone has had a vaccine, has immunity from previously having had coronavirus, or has tested negative – “will be useful” within the UK. 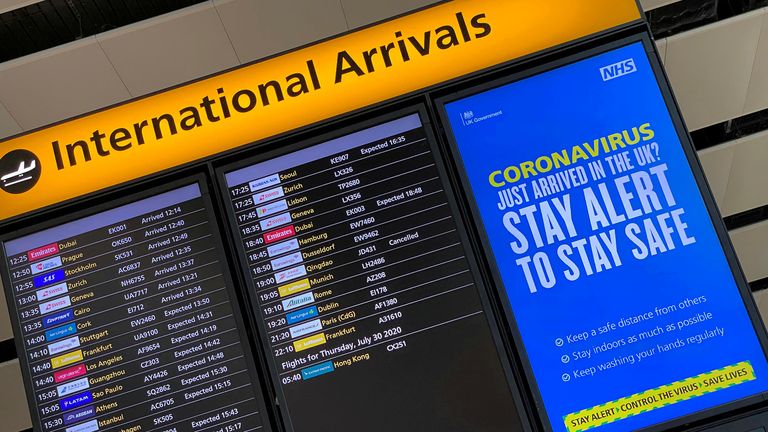 He has previously suggested Britons might have to show such evidence of their COVID status before entering a pub.

“Those three things working together will be useful for us as we go forward.”

The prime minister made the comments after being quizzed about Labour leader Sir Keir Starmer’s suggestion that the “British instinct” will be against the introduction of COVID passports for places like pubs.

The government is currently conducting a review into the possible use of COVID certification to help with the reopening of some sectors of the economy.

But such proposals – which have been dubbed “papers for the pub” – have been met by fierce criticism from a number of Conservative MPs, as well as many in the hospitality industry.

Speaking later on Thursday, Health Secretary Matt Hancock cautioned against rejecting the idea of people having to provide proof of their COVID status as lockdown restrictions are eased.

“Clearly we’re going to need this sort of certification in some areas – like to go abroad because some other countries will require it,” he said.

“So the NHS is making sure we’re ready for people to be able to show whether you’ve had a vaccine, or indeed a recent test for travel purposes. And we’re looking at whether to do that domestically.

“I think dismissing something like this out of hand is the wrong thing to do. The right thing to do is to look in detail at how we can most safely open things up.”