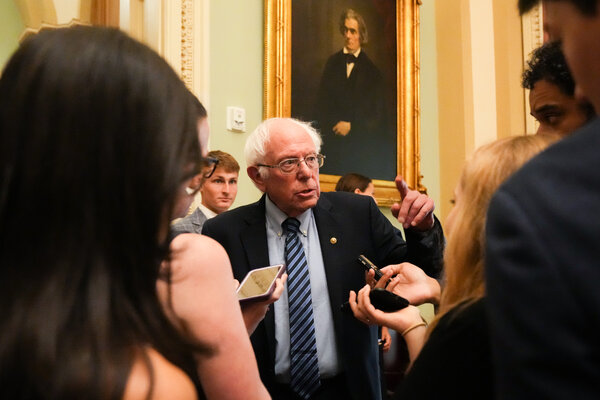 Democrats unveiled a $3.5 trillion budget blueprint on Monday that would launch work on a social and economic policy package that could prove to be the most significant expansion of the nation’s social safety net since Medicare and the Great Society.

The blueprint would allow Senate Democrats to piece together legislation this fall that would greatly boost spending on health care, child and elder care, education and climate change, fully paid for by raising taxes on the wealthy, large inheritances and corporations. And if Democrats and their two independent allies can hold together, that measure could pass the Senate without a Republican vote.

With the Senate on the brink of passing a $1 trillion bipartisan infrastructure bill, the blueprint could unlock Democrats’ ability to secure the remainder of President Biden’s $4 trillion economic agenda.

“At its core, this legislation is about restoring the middle class in the 21st century and giving more Americans the opportunity to get there,” Senator Chuck Schumer of New York, the majority leader, wrote in a letter to his caucus. He said the instructions had been carefully coordinated with Speaker Nancy Pelosi of California and Representative John Yarmuth of Kentucky, the chairman of the House Budget Committee.

The budget blueprint, while nonbinding, calls for a series of key liberal priorities, including ones championed by Senator Bernie Sanders of Vermont, the independent chairman of the Senate Budget Committee. It calls for an expansion of Medicare to include dental, hearing and vision benefits, the formation of a Civilian Climate Corps to address climate change, and funding to establish universal pre-K and grant free community college tuition for two years.

It also accommodates key policy priorities like a path to citizenship for millions of undocumented immigrants and provisions to beef up enforcement of labor laws and penalties for employers that violate them. Democrats are trying to push the boundaries of the fast-track budget process to clear policy changes that otherwise would fail to gain Republican support, but the strict budgetary rules may ultimately prevent their inclusion.

Democrats appear to have rejected the possibility of addressing the approaching statutory limit on the federal government’s ability to finance the country’s debt in the budget blueprint. In a statement Monday morning, Janet Yellen, the Treasury secretary, said that Congress should address the debt ceiling in bipartisan legislation, even as Republicans warn they will not join with Democrats in doing so.

“The vast majority of the debt subject to the debt limit was accrued prior to the administration taking office,” Ms. Yellen said. “This is a shared responsibility, and I urge Congress to come together on a bipartisan basis as it has in the past to protect the full faith and credit of the United States.”

The decision is a major risk, since a default on the nation’s debt could trigger a global economic crisis. But raising the nation’s statutory borrowing limit in the budget resolution would come with political costs: to do it, Senate rules require that the provision includes a hard number for the debt ceiling increase.

Instead, Democrats would like to use separate legislation to extend the Treasury’s borrowing authority to a future date, not a dollar limit — a far less fraught political target.