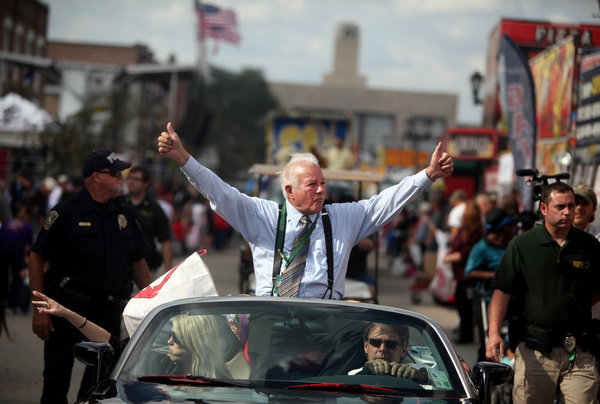 Edwin W. Edwards, the only four-term governor in Louisiana’s history, a swashbuckling rogue who charmed voters with his escapades and survived a score of grand jury investigations and two corruption trials before going to prison in 2002 for racketeering, died on Monday at his home in Gonzales, La. He was 93.

Leo Honeycutt, the author of the authorized biography “Edwin Edwards: Governor of Louisiana,” said the cause was respiratory failure.

In January 2011, Mr. Edwards was released from a federal prison in Oakdale, La., after serving more than eight years of a 10-year sentence for bribery and extortion. He had been found guilty of rigging Louisiana’s riverboat casino licensing process during his last term in office.

Six months later, he married for the third time. And in the fall, he rode in an open convertible through cheering crowds waving Edwards-for-governor signs at an election-day barbecue. “As you know, they sent me to prison for life,” he told them. “But I came back with a wife.”

Before Mr. Edwards, no one had ever been elected to more than two terms as governor of Louisiana. Indeed, the state constitution prohibits more than two consecutive terms. But from 1972 to 1996, with a couple of four-year furloughs to stoke up his improbable comebacks, Mr. Edwards was the undisputed king of Baton Rouge, a Scripture-quoting, nonsmoking teetotaler who once considered life as a preacher.

In a state where it has always been good politics to wink at a little wickedness, Mr. Edwards, the silver-haired, bilingual son of French Creole sharecroppers and a relentless electoral and legislative infighter, was perhaps the most dominant political force since Huey Long, the radical populist known as the Kingfish, who was assassinated at the State Capitol in 1935.

Courting votes in a bayou drawl with Cajun-inflected pledges to “laissez les bons temps rouler” (“let the good times roll”), Mr. Edwards — who avoided the prototypical political sin of self righteousness and talked the way plain folks did over gumbo and crawfish pie — rose from a local council to the State Senate to a seat in Congress and the governor’s mansion in 17 years.

Once there, he promised a square deal “to the poor, the elderly, the unemployed, the thousands of Black Louisianans who have not yet enjoyed the full bounty of the American dream.” And for a while he delivered.

In his first two terms, from 1972 to 1980, he achieved breakthroughs in hiring women and members of minorities, eliminated chronic budget deficits, modernized the state constitution, helped bring a National Basketball Association team to New Orleans and crafted changes in oil taxes, paving the way for boom revenues that paid for improved social services, health, education and highways.

In his third term, from 1984 to 1988, the oil boom went bust, his stock with voters crumbled and he grappled with new deficits. Still, he engineered a fourth term, from 1992 to 1996, and ushered in casino and riverboat gambling to ease the pain of hard times.

Throughout his years as governor, Mr. Edwards pursued his own pleasures: trips to Las Vegas with suitcases full of cash; all-night poker parties with cronies who paid $10,000 antes; a junket to Paris and Monte Carlo for 600 supporters who paid off his campaign debts; and endless womanizing, which he did not bother to deny.

Asked once if he feared that his phone were tapped, he answered, “I can’t imagine who would want to do it, except maybe some jealous husbands.”

He was the target of criminal investigations that went nowhere. He acknowledged being questioned by 22 state and federal grand juries — about selling state jobs to campaign contributors, about a $10,000 “gift” to his wife from a Korean businessman, and about paying gambling debts with cash of unknown origin, among other skulduggery. “Fast Eddie,” as he was known, shrugged it all off.

In his third term, he was charged with conspiring to sell state hospital and nursing home construction permits. He admitted taking $1.9 million, but contended that he had done nothing illegal. His 1985 trial ended in a hung jury; at a second trial, in 1986, he was acquitted.

Mr. Edwards lost only one election, in 1987. Up for re-election, he dropped out after losing an open primary to Representative Buddy Roemer, who accused him of turning the state into a “banana republic.” In 1991, Governor Roemer lost to Mr. Edwards in a primary, then endorsed his old rival in the general election against David Duke, a neo-Nazi and former Ku Klux Klan grand wizard.

After trouncing his hapless opponent, Mr. Edwards — savoring a sense of invincibility and the sweet prospect of a fourth term — delivered one of his most memorable lines. He could not be beaten or sunk by scandal, he said, unless he was “caught in bed with a dead girl or a live boy.”

It was vintage Edwards, but he was wrong. In 2000, four years out of office, he was convicted of 17 counts of racketeering, conspiracy and extortion for selling riverboat casino licenses. Edward J. DeBartolo Jr., the former owner of the San Francisco 49ers of the N.F.L., testified that he had paid Mr. Edwards $400,000 for a license. Four others, including Mr. Edwards’s son, Stephen, were also convicted. Mr. Edwards was sentenced to 10 years and went to prison in 2002, defiant to the last.

“If they gave me credit for the time I’ve spent in court and before grand juries, I could walk out tomorrow,” he told reporters at the prison gate.

By the time he was released in 2011, Louisiana had suffered through Hurricane Katrina and a sagging economy, populism was mostly the Tea Party brand, and his salty talk about political shenanigans and skirt-chasing seemed out of date.

But flashes of the old magic were still apparent at a traditional rice festival in Acadia Parish, where Mr. Edwards’s political career had begun 57 years earlier. As grand marshal of the parade, he rode through the mostly older crowds in an open convertible wearing shirt sleeves and suspenders, arms raised and thumbs up, beaming triumphantly. A booth sold “Edwin Edwards President 2012” T-shirts.

Edwin Washington Edwards was born on Aug. 7, 1927, in rural Avoyelles Parish, near Marksville, the son of Clarence and Agnès (Brouillette) Edwards. His father was a half-French Creole Presbyterian, his mother a French-speaking Roman Catholic.

Like many 20th-century politicians from Avoyelles, Mr. Edwards assumed he had Cajun ancestry, but he may have had none. His father was descended from a family in Kentucky that arrived in Louisiana during the Civil War. Nevertheless, he was raised in the tradition of Cajuns, descendants of French settlers expelled from Nova Scotia by the British in 1755. He preached in a Protestant evangelical church as a youth, and he joined the Navy Air Corps toward the end of World War II.

Mr. Edwards graduated from Louisiana State University’s law school and began practice in Crowley, La., in 1949. Elected to Crowley’s City Council in 1954, he joined the vanguard of a new movement in state politics. Northern Louisiana, mostly conservative, had long dominated state races with money from its oil fields. But freewheeling southern Louisiana was recording surges in voting populations and prosperity from offshore oil and gas discoveries.

Fluent and articulate in English and Cajun French, Mr. Edwards went to the State Senate in 1964 and held a seat in Congress from 1965 to 1972. He won his 1971 race for the governorship as a reformer with heavy support from Southern Cajun, Creole and Black voters. In his first year in office, he appointed his wife, Elaine, to the United States Senate to replace Allen J. Ellender, who had died.

In addition to his wife and their son, Mr. Edwards is survived by his children from his first marriage, 16 grandchildren and 19 great-grandchildren.

Mr. Edwards and his wife were the stars of a short-lived reality show, “The Governor’s Wife,” which ran for eight episodes on the A&E cable channel in 2013.

In 2014, Mr. Edwards failed in a bid to return to Congress, losing in a runoff to Garret Graves, a Republican.

Among the countless stories about Mr. Edwards was one told by John Maginnis, the author of a 1984 biography, “The Last Hayride.” Campaigning at a revival meeting on the Fourth of July, Mr. Edwards, resplendent in summer whites and carrying a white Bible, handed the preacher an envelope containing $5,000 as the crowd clapped and cheered.

“Tell me,” Mr. Maginnis asked the preacher afterward, “how can pious people support a man who is known to gamble, chase women and constantly face investigation for corruption?”