The French President is fighting on multiple fronts to prove he is fit to lead the country for a second five-year term ahead of the 2022 national election. Terror attacks, a global pandemic and the bitter wrangling over future access to Britain’s fishing grounds have all blighted his presidency in recent weeks. According to the Europe Elects website, Mr Macron’s Le Republique En Marche party is slipping in the opinion polls.

The President’s liberal movement suffered a five percent slump in support this summer, as shown by two separate surveys in July and September.

Marine Le Pen, leader of the eurosceptic Rassemblement National, has managed to clinch a lead in the polls even after seeing support for her own right-wing party also slip.

And the misery looks set to continue for Mr Macron after plunging France into its second national lockdown to combat the spread of coronavirus.

Economists have predicted a fresh slump in economic activity as businesses are forced to close their doors. 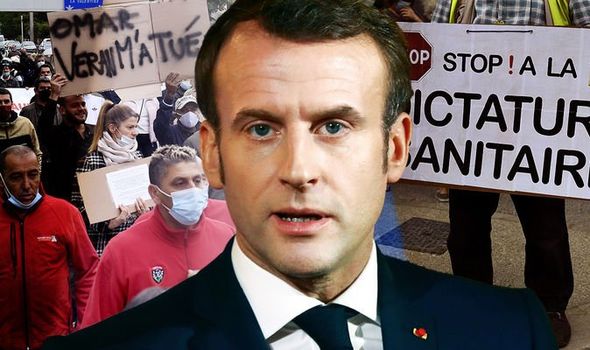 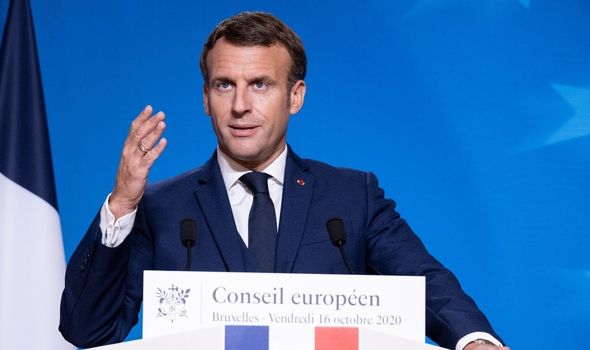 Gilles Moec, chief economist at Axa, claimed if the lockdown runs into mid-December with a slight relaxation in the run-up to Christmas it would lead to a 7.4 percent quarterly slump in Gross Domestic Product.

And Bruno Le Maire, the French finance minister, said he expected economic activity to drop by 15 percent due to the restrictive measures.

France witnessed a record 52,518 new coronavirus cases on Monday and hospitalisations rose by more than 1,000 for the fourth time in eight days.

Anger at the new lockdown rules have sparked anger across the country, which just this morning sparked angry clashes between students and riot police in Paris. 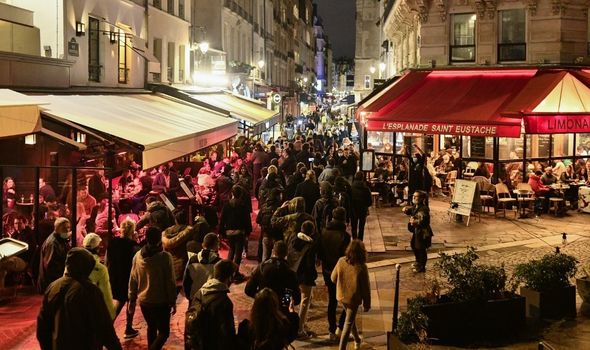 French security forces last week were seen chasing down anti-lockdown protesters in the capital in a bid to disperse an illegal march held to protest the measures.

Hundreds gathered in the southern city of Marseille to express their displeasure at the new measures.

And more bizarrely book store owners were also forced to demand to be allowed to reopen after Mr Macron’s government insisted they shut their doors. 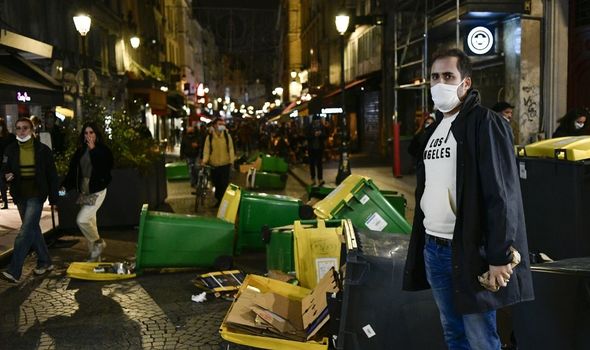 The President has also had to stand in defiance against Islamist terrorism after three deadly attacks in the past six weeks.

His uncompromising stance have provoked angry demonstrations against France in Muslim countries and threats to boycott French products.

Mr Macron has been warned not to push his anti-extremism rhetoric as far to upset France’s six million Muslims, many of whom he will be hoping to convince to vote for him in 2022.

And in the post-Brexit trade and security talks, the French leader has been forced to hold out for his hardline demands to secure the same level of access to Britain’s fishing waters.

But he faces a losing battle with Michel Barnier, the EU’s Brexit chief, seemingly ready to offer concessions to the UK in a bid to get an agreement across the line.

French fishermen – many of whom are supporters of Ms Le Pen – have been disheartened to find out they will in fact face losing access to the UK’s coastal waters after Brexit.