For the sitting president, even a triumphant ceremony to sign major domestic legislation can hardly break through the nonstop attention on his predecessor. 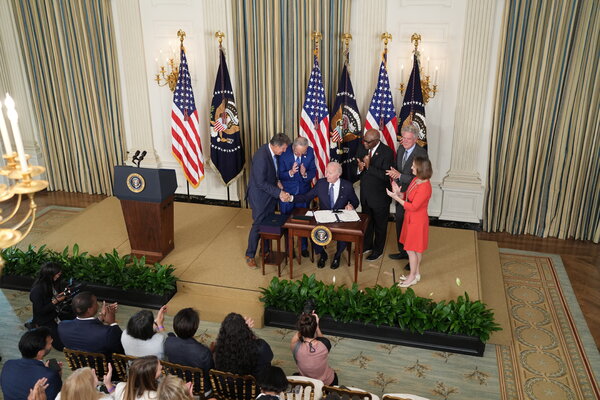 Moments before President Biden signed a legacy-defining package of initiatives into law on Tuesday, one of his congressional allies lamented that the president’s accomplishments are “often away from public view” while another contrasted him with a former president who “relished creating chaos.”

No one mentioned Donald J. Trump’s name during the ceremony in the State Dining Room of the White House, but his presence was felt nonetheless as Mr. Biden enacted major climate, health care and corporate tax policies. One major reason Mr. Biden’s achievements often seem eclipsed in public view is because Mr. Trump is still creating chaos from his post-presidential exile.

No other sitting president has ever lived with the shadow of his defeated predecessor in quite the way that Mr. Biden has over the last year and a half. Regardless of what the current president does, he often finds himself struggling to break through the all-consuming circus that keeps Mr. Trump in the public eye. Even the bully pulpit of the White House has proved no match for the Trump reality show.

That may not be a bad thing for Mr. Biden in every respect. The news about Mr. Trump lately is nothing to be jealous of — the F.B.I. searching his home to retrieve secret documents improperly removed from the White House, his chief lawyer targeted by a criminal investigation, his longtime financial officer nearing a plea deal that will send him to prison and the former president himself pleading the Fifth Amendment more than 400 times to avoid incriminating himself in an investigation of his business activities. “Will He Be Indicted?” is not a chyron that Mr. Biden covets.

But it has become a frustrating and inescapable fact of life in the White House that Mr. Biden often has a hard time matching the man he beat when it comes to driving the national conversation. Until recently, Mr. Biden had enough trouble on his own communicating his agenda and successes, and now he finds himself in a frenzied news cycle dominated by multiple investigations in multiple jurisdictions involving Mr. Trump and his allies.

“Biden can’t reinvent himself in a way that out-Trumps Trump. It’s just not in his nature and would backfire,” said Kevin Madden, a Republican political consultant. “The best opportunity he has to offer the starkest contrast with Trump is to focus relentlessly on the issues giving the widest range of voters the most acute anxiety: inflation, housing, jobs and financial security. These are all issues where, if Biden can reset the trend lines, he can regain political capital.”

That is the strategy Mr. Biden’s aides hope to employ, making the argument that the domestic policy package he signed on Tuesday, along with falling gas prices and investments in the semiconductor industry and veterans’ health care, will appeal to voters more concerned about their own pocketbooks than Mr. Trump’s legal travails.

“The American people want President Biden to be focused on the things that impact their lives and what he’s going to do today is sign a bill that’s going to bring down their costs, the single biggest concern that they raise,” Kate Bedingfield, the White House communications director, said in an interview before the signing ceremony.

Mr. Biden’s team recognized in advance that after carrying Tuesday’s ceremony, cable news outlets would quickly turn back to the latest developments involving Mr. Trump, so it opted to amplify the president’s message by enlisting cabinet officers to give interviews to local and regional media organizations. The White House posted online a video of the signing and drafted an opinion article in the president’s name that was published by Yahoo News.

Mr. Biden, who lately has been less in the public eye because of Covid-19 and now his summer vacation, will hold a rally in Maryland on Aug. 25 to kick off a series of events aimed at showcasing his accomplishments heading into the fall midterm campaign, when Democrats face an uphill battle to hold onto Congress. He plans another White House ceremony on Sept. 6 to celebrate the climate-health-tax bill, dubbed the Inflation Reduction Act by Democrats to appeal to public concerns even though it will likely not reduce inflation much in the short term.

With Democrats anxious over Mr. Biden’s dismal approval ratings in polls, the White House released a memo this week outlining plans to spread the word about the recent spate of action. “Our goal for the next few weeks is simple: Take our message — one that we know resonates with key groups — and reach the American people where they are,” the memo said.

The imperative, analysts said, will be to sustain the message enough to get through despite competing developments. “Repetition is the key to plowing through what sometimes seems like an impenetrable curtain between a president and the public,” said Martha Joynt Kumar, a longtime scholar of presidential communication and author of books on the White House.

The challenge for Mr. Biden is acute. Only 41 percent of Americans said they were even familiar with the legislation signed on Tuesday, according to a Reuters/Ipsos poll. But its major elements enjoy strong support among voters when informed, with 62 percent to 71 percent in favor of provisions like allowing Medicare to negotiate lower drug prices and expanding incentives for clean energy.