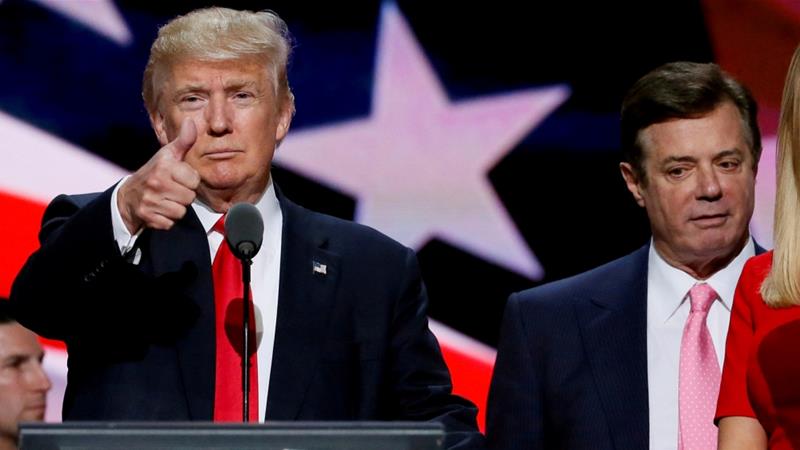 A federal judge in the United States has ruled that Paul Manafort, President Donald Trump’s former campaign manager, intentionally lied to investigators and a federal grand jury in the special counsel in the Russia probe.

The ruling on Wednesday was another loss for Manafort, who faces years in prison in two separate criminal cases stemming from special counsel Robert Mueller’s investigation into Russian interference in the 2016 US presidential election and possible collusion between Moscow and the Trump campaign.

US District Judge Amy Berman Jackson, who is overseeing the case in a Washington court, found there was sufficient evidence to say Manafort broke his plea agreement by lying about three of five matters that prosecutors had singled out.

That included his misleading the FBI, prosecutors and a federal grand jury about his interactions with Konstantin Kilimnik, his co-defendant who prosecutors say has ties to Russian intelligence.

The ruling hurts Manafort’s chance of receiving a reduced sentence, though Jackson said she would decide the exact effect during his sentencing next month.

The four-page order resolves a dispute that had provided new insight into how Mueller views Manafort’s actions as part of his broader probe.

It follows last week’s release of a court transcript that showed Mueller’s team believed Manafort’s alleged lies were central to their investigation into potential collusion, which Trump and Russia have both denied.

The investigation appears focused on a meeting held at the height of the election campaign between Manafort and Kilimnik, according to the court filing.

Mueller contends that Manafort lied about the number of times he and Kilimnik discussed a “Ukrainian peace plan” – a reference to a proposal that would result in the US lifting sanctions on Russia, one of the Kremlin’s top objectives.

During a sealed hearing, Mueller prosecutor Andrew Weissmann said one of the discussions – an August 2, 2016, meeting at the Grand Havana Club cigar bar in New York – went to the “larger view of what we think is going on” and what “we think the motive here is”.

“This goes, I think, very much to the heart of what the Special Counsel’s Office is investigating,” Weissmann said, adding: “That meeting and what happened at that meeting is of significance to the special counsel.”

The meeting occurred while Manafort was still in a high-ranking role in the Trump campaign. Rick Gates, Manafort’s longtime deputy and also a Trump campaign aide, also attended.

Prosecutors also accused Manafort of lying about sharing polling data with Kilimnik during the 2016 presidential campaign, an allegation that became public accidentally when Manafort’s lawyer flubbed redactions in a court filing.

Manafort’s lawyers had argued that he did not intentionally mislead investigators but rather forgot some details until his memory was refreshed. They also said the special counsel had not shown that the topics at issue were material to the investigation.

In her ruling, Jackson said prosecutors did not sufficiently back up two allegations against Manafort, saying she could not find that he intentionally lied about Kilimnik’s role in witness tampering or what Manafort told investigators about his contacts with the Trump administration.