Brexit: EU 'under pressure' to be 'friendlier' to UK says de Lucy

He said there are already signs of “social unrest and anger” over Brussels’ failures to defend the interests of ordinary citizens. He blasted Eurocrats for ignoring their legitimate concerns – such as illegal immigration and the “red tape and complexity” of the EU. The Frenchman’s stark warning comes as opinion polls show growing support for Eurosceptic Marine Le Pen ahead of next year’s presidential elections.

Mr Barnier is eyeing up his own run at the French presidency and has not been shy in criticising Brussels since stepping down as its Brexit chief.

Speaking at an event in northern France, Mr Barnier said: “We could draw some lessons from Brexit.

“There are reasons we can find, not just in the UK, but here in France, in the northern and eastern regions
you know, citizens who want to leave the EU.”

Brussels currently finds itself under mounting public pressure over its disastrous role in the EU’s joint Covid-19 vaccines buy-up.

Mr Barnier added: “It’s important for us to listen to the anger expressed in the UK and implement the kind of changes necessary to better reassure the European citizens that remain.”

French voters will go to the polls next April in an election that could be make or break for the bloc. 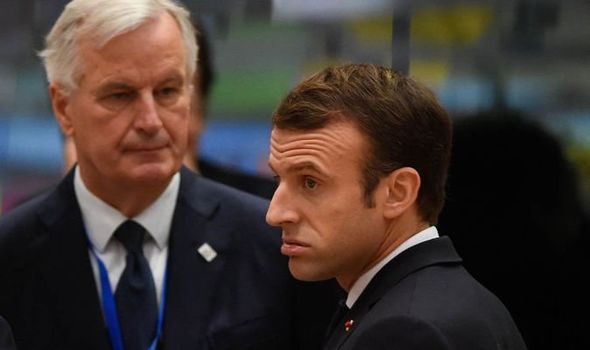 Latest opinion polling shows National Rally leader Ms Le Pen, who has previously championed a “Frexit”, is on course to win the first round of the contest with 25 percent of the vote. Pro-Brussels President Macron is forecast to secure a slender 54-46 percent win in the second round, much smaller than his 66-34 percent margin four years ago.

Ms Le Pen has sought to detoxify her party’s image and distance herself from her father’s far-Right past.

She says Boris Johnson’s electoral demolition of Labour’s heartlands is her inspiration in her bid to capitalise on Mr Macron’s dwindling popularity.

“Never before, with only one year to go to the ballot, has a National Rally candidate obtained such scores.”