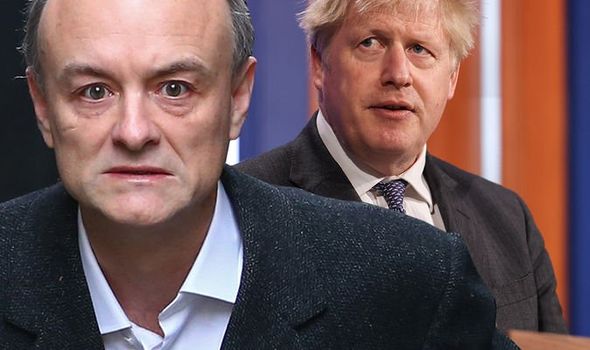 The former special adviser to the Prime Minister has let rip at Downing Street in a statement posted on his blog.

Last night a No10 source accused the Brexit mastermind of leaking damaging information about Mr Johnson in an attempt to jeopardise his premiership.

Messages from the Prime Minister’s mobile phone have been sent to the press in recent weeks.

Plans for a second lockdown last November were also leaked to journalists ahead of an official announcement, forcing Mr Johnson to hastily arrange a televised press conference to announce the plans to the public.

Separate inquiries to find those responsible for the leaks are being carried out by the Cabinet Office, but a Downing Street source last night accused Mr Cummings of being the mole.

“Dominic is engaged in systematic leaking,” a source told The Times.

“We are disappointed about that.

“We are concerned about messages from private WhatsApp groups which have very limited circulation.”

Rfuting the accusations this afternoon, he said the claims were “false”, adding: “Issues concerning Covid and/or the PM’s conduct should not be handled as No10 has handled them over the past 24 hours.”