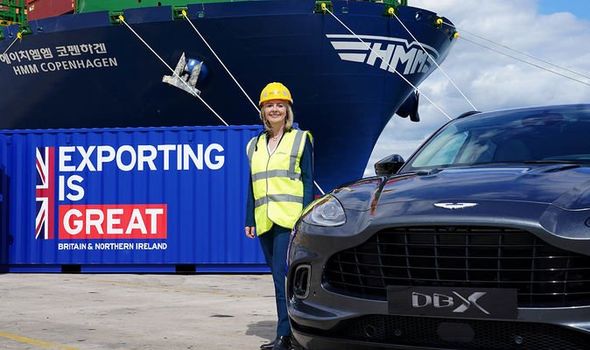 She also promised that the Government was working towards “gold-standard” deals with the US and Australia in the coming year. Trade deals with 63 countries come into effect today, along with the free trade agreement with the EU struck by Boris Johnson on Christmas Eve. The deals cover trading relationships that were worth £885billion in 2019.

In an exclusive message to our readers, Liz Truss said: “After taking back control of our trade policy last year, we have worked flat out to strike agreements with likeminded allies to support the best of British business and cement our status as a global services and technology hub.

“While we were not able to unleash the full potential of our innovators in the past, we are now championing the industries of the future with innovation-loving nations like Japan and Singapore.

“And we are working towards gold-standard deals with allies such as the US and Australia.

“Meanwhile, we have made big strides towards joining perhaps the most vibrant trading area on Earth – the Comprehensive and Progressive Trans-Pacific Partnership.

“Together, we would stand for rules-based free trade and real economic dynamism.”

She also said that “2021 will see Global Britain take flight, free as a fully independent trading nation to support jobs and opportunity across every corner of the UK through British shaped deals.

“We have now secured trade deals with 63 countries plus the EU, accounting for £885billion worth of trade annually.

“There is a world of opportunity out there and I am looking forward to going further and faster to seize it.”

Two days ago, the International Trade Secretary concluded negotiations for an economic partnership agreement with Cameroon, ensuring the UK will trade as freely with the West African nation as it did under EU membership.

Total UK trade with Cameroon amounted to £200million in 2019, with nuts, bananas, timber and wood products being the main imports to Britain.

And earlier this week, the Government agreed a tariff-free deal with Turkey, covering the £18billion-a-year relationship between the two nations.

While Britain’s deal with the EU maintains a trading relationship that was worth £668billion in 2019.

Other key deals coming into force today are with Switzerland and Canada, covering commerce worth £36billion and £22billion in 2019 respectively.

The International Trade Secretary has also secured deals with a series of trade blocs, including the South Africa Customs Union and Cariforum, which covers Caribbean countries including Jamaica, Trinidad and Tobago, Belize, Guyana and the Bahamas.

World trade experts are confident that the Government can secure many more lucrative deals in the coming months.

Graham Gudgin, a research associate at Cambridge University’s Centre For Business Research and a member of the

Briefing for Brexit group of experts, said: “A lot of progress has been made in signing trade deals over the last year.

“The Department for International Trade has been quietly getting on with the job rather impressively.

The Government has rolled over around 58 deals, around three-quarters of those from deals with the EU, and good progress is being made on the rest.

“Our most important trade deal so far has been the one with Japan, which took a matter of weeks. It just shows that when two countries want to trade together, a deal can be sorted out pretty quickly.”

He added: “By the end of this year I fully expect us to have signed many more including with the US, Australia and New Zealand. We will be trading more with fast-growing markets and less with the more sluggish areas of the global economy.”

Former international trade secretary Liam Fox pointed to the International Monetary Fund estimating that 90 percent of global growth will come from outside the EU over the next 10 years.

He said: “Markets are already out there for the best that Britain has to offer. For UK export goods from top-end fashion to high-quality cars to Scotch whisky to high-end manufacturing, the demand is growing.

“For professional services too, from accountancy to law or education or life sciences or financial services, these newly emergent middle classes will need more of the skills where we are already world-class.

“The UK is perfectly placed to partner with the economic powerhouses of the future, and they in turn are eager for the mutual prosperity that such a partnership would bring.”

Victoria Hewson, the head of regulatory affairs at the Institute of Economic Affairs, said: “The UK will be able to pursue trade deals with partners that go further and focus more on our interests.

“The EU has not prioritised services and data flows, for example, and these areas will be vital for the UK to support innovation and sustainable growth across the country.

“We should also prioritise consumers and recognise that imports benefit our economy as much as exports. This means that the Government should not wait for free trade agreements to start reducing tariffs and opening our market.

“Finally, international trade is only part of the picture. The reforms available to our domestic laws and regulations will make the real difference to our future prosperity.

“Instead of trying to subsidise and spend our way out of the recession brought about by Covid lockdowns, the Government should be reforming and improving regulations that hold back innovation in financial services, agriculture, research and development, and manufacturing, amongst others.

“The EU’s reported concerns about the UK becoming more competitive outside of its regulatory structures show how powerful changes here could be.

“Some much-needed reforms have always been in the hands of our Government – like planning and tax policy. Post-Brexit, the pressure is on to embrace these opportunities, at home and abroad.”