Facing a tough re-election fight, Senator Lindsey Graham has tried to leverage his role as the ringmaster of confirmation ceremonies. His stream-of-consciousness dialogue has gotten him into trouble. 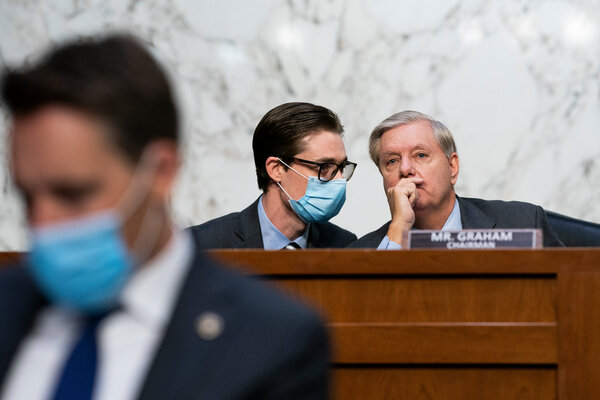 WASHINGTON — Around the time he was ready to wrap up the Supreme Court confirmation hearings of Judge Amy Coney Barrett, Senator Lindsey Graham, Republican of South Carolina and the chairman of the Judiciary Committee, blurted out the clear subtext of President Trump’s rush to install her before Election Day.

“You all have a good chance of winning the White House,” Mr. Graham told the Democrats on the committee, suggesting that they might soon have the chance to push through their own court nominees.

The frank assessment was typical of Mr. Graham, who has cultivated a reputation in the Senate for serving up candid commentary with a winking, sardonic twist. But it was also a gaffe of sorts, effectively conceding Democrats’ central argument against rushing to confirm Judge Barrett before voters have their say on Nov. 3.

In a week of televised hearings, it was not the only misstep by Mr. Graham, who is facing a difficult re-election battle of his own in South Carolina.

He praised Judge Barrett as “unashamedly pro-life” after she had spent days insisting she had “no agenda” to try to overturn abortion rights. He sarcastically referred to “the good old days of segregation” and was forced to walk the remark back. He quipped that his views on campaign finance reform might change because he did not know “where the hell” all his Democratic challenger’s money was coming from, and later plugged his campaign website in an extraordinary (and illegal) fund-raising appeal to voters made from a Senate office building.

The blunders came at a critical moment for Mr. Graham, who had hoped his high-profile role in the hearings would give him a political boost in his increasingly tight re-election race.

“The contest in South Carolina has taken on a national profile,” Mr. Graham told reporters on Capitol Hill. “I trust the people of South Carolina to get it right.”