WASHINGTON — When the House impeachment managers prosecute former President Donald J. Trump this week for inciting the Capitol attack, they plan to mount a fast-paced and cinematic case aimed at rekindling the outrage lawmakers experienced themselves on Jan. 6, in arguments delivered from the scene of the invasion.

Armed with lessons from the first impeachment trial of Mr. Trump, when even Democratic senators complained the arguments were repetitive and sometimes sanctimonious, the prosecutors managing his second are prepared to complete the proceeding in as little as a week, forgo distracting fights over witnesses and rely more heavily on video, according to a half-dozen people working on the case.

It would take 17 Republicans joining with every Democrat to find Mr. Trump guilty, making conviction unlikely. But when the trial opens on Tuesday, the prosectors will try to force senators who lived through the deadly rampage as they met to formalize President Biden’s election victory to reckon with the totality of Mr. Trump’s monthslong drive to overturn the election and his failure to call off the assault they argue it provoked.

“The story of the president’s actions is both riveting and horrifying,” Representative Jamie Raskin, Democrat of Maryland and the lead prosecutor, said in an interview. “We think that every American should be aware of what happened — that the reason he was impeached by the House and the reason he should be convicted and disqualified from holding future federal office is to make sure that such an attack on our democracy and Constitution never happens again.” 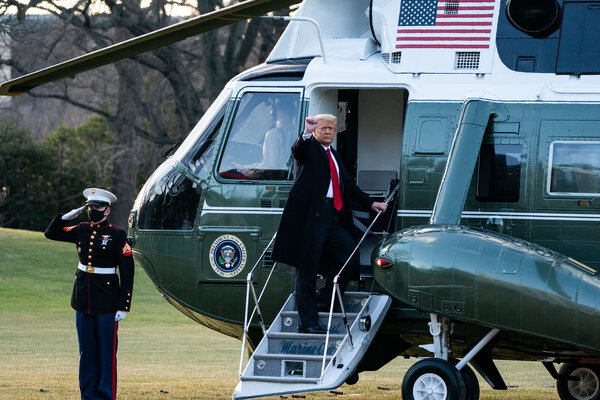 In making Mr. Trump the first American president to be impeached twice, Democrats have essentially given themselves an unprecedented do-over. When Representative Adam B. Schiff, Democrat of California, was preparing to prosecute Mr. Trump the first time for a pressure campaign on Ukraine, he read the 605-page record of President Bill Clinton’s 1999 impeachment trial cover to cover, sending aides as many as 20 dispatches a day as he sought to modernize a proceeding that had happened only twice before.

This time, a new group of nine Democratic managers need reach back only a year to study the lessons of Mr. Schiff’s prosecution: Don’t antagonize Republicans, use lots and lots of video and, above all, make succinct arguments to avoid lulling the jury of lawmakers into boredom or distraction.

Mr. Trump’s lawyers have indicated that they once again intend to mount a largely technical defense, contending that the Senate “lacks jurisdiction” to judge a former president at all after he has left office because the Constitution does not explicitly say it can. Though many legal scholars and a majority of the Senate disagree, Republicans have flocked to the argument in droves as a justification for dismissing the case without weighing in on Mr. Trump’s conduct.

But the lawyers, Bruce L. Castor Jr. and David Schoen, also plan to deny that Mr. Trump’s incited the violence at all or intended to interfere with Congress’s formalizing of Mr. Biden’s victory, asserting that his baseless claims that the election was “stolen” are protected by the First Amendment. And Mr. Castor told Fox News that he, too, would rely on video, possibly of unrest in American cities led by Democrats.

The managers will try to rebut them as much with constitutional arguments as an overwhelming compendium of evidence. Mr. Raskin’s team has spent dozens of hours culling a deep trove of videos captured by the mob, Mr. Trump’s own unvarnished words and criminal pleas from rioters who said they acted at the former president’s behest.

The primary source material may replace live testimony. Trying to call new witnesses has been the subject of an extended debate by the managers, whose evidentiary record has several holes that White House or military officials could conceivably fill. At the last trial, Democrats made an unsuccessful push for witnesses a centerpiece of their case, but this time, many in the party say they are unnecessary to prove the charge and would simply cost Mr. Biden precious time to move his agenda without changing the outcome.

“It’s not that there should not be witnesses; it’s just the practical realities of where we are with a former president,” said Daniel S. Goldman, a former House lawyer who worked on Mr. Trump’s first impeachment. “This is also something that we learned from the last trial: This is a political animal, and these witnesses are not going to move the needle.”

Mr. Raskin and other managers declined to speak about strategy, but current and former officials familiar with the confidential preparations agreed to discuss them anonymously. The prosecutors’ almost complete silence in the run-up to the trial has been another departure from the strategy of Mr. Trump’s first impeachment, when Democrats set up a sizable communications war room in the Capitol and saturated the cable television airwaves in an all-out battle against Mr. Trump in the court of public opinion.

They have largely left it to trusted allies like Mr. Schiff and Speaker Nancy Pelosi to publicly discuss their case and bat back criticism about why the House is pressing its case even now that Mr. Trump is out of office.

“If we were not to follow up with this, we might as well remove any penalty from the Constitution of impeachment — just take it out,” Ms. Pelosi told reporters who questioned why Democrats would consume so much of Congress’s time with a former president.

Key questions about the scope and shape of the trial remain unsettled. Senators spent the weekend haggling over the precise structure and rules of the proceeding, the first time in American history a former president will be put on trial.

Prosecutors and Mr. Trump’s defense lawyers expected to have at least 12 hours each to make their case. Mr. Raskin, a former constitutional law professor, has been coaching his colleagues in daily meetings to aggressively winnow down their arguments, cling to narrative where possible and integrate them with the visual aids they plan to display on TVs in the Senate chamber and on screens across the country.

Behind the scenes, Democrats are relying on many of the same lawyers and aides who helped assemble the 2020 case, including Susanne Sachsman Grooms from the House Oversight and Reform Committee, and Aaron Hiller, Arya Hariharan and Amy Rutkin from the Judiciary Committee. The House also temporarily called back Barry H. Berke, a seasoned New York defense lawyer, to serve as chief counsel and Joshua Matz, a constitutional expert.

Mr. Schiff said his team had tried to produce an “HBO mini-series” featuring clips of witness testimony to bring to life the esoteric plot about Mr. Trump’s pressure campaign on Ukraine. Mr. Raskin’s may appear more like a blockbuster action film.

“The more you document all the tragic events leading up to that day and the president’s misconduct on that day and the president’s reaction while people were being attacked that day, the more and more difficult you make it for any senator to hide behind those false constitutional fig leaves,” said Mr. Schiff, who has informally advised the managers.

To assemble the presentation, Mr. Raskin’s team has turned to the same outside firm that helped put together Mr. Schiff’s multimedia display. But Mr. Raskin is working with vastly richer material to tell a monthslong story of how he and his colleagues believe Mr. Trump seeded, gathered and provoked a mob to try to overturn his defeat.

There are clips and tweets of Mr. Trump from last summer, warning he would only lose if the election was “rigged” against him; clips and tweets of him claiming victory after his loss; and clips and tweets of state officials coming to the White House as he sought to “stop the steal.” There is audio of a call in which Mr. Trump pressured Georgia’s secretary of state to “find” the votes needed to reverse Mr. Biden’s victory there; as well as presidential tweets and accounts by sympathetic lawmakers who say that once those efforts failed, Mr. Trump decisively turned his attention to the Jan. 6 meeting of Congress for one last stand.

At the center is footage of Mr. Trump, speaking outside the White House hours before the mob overtook the police and invaded the Capitol building. The managers’ pretrial brief suggests they are planning to juxtapose footage of Mr. Trump urging his supporters to “fight like hell” and march to the Capitol and confront Congress with videos posted from members of the crowd who can be heard processing his words in real time.

“Even with this trial, where senators themselves were witnesses, it’s very important to tell the whole story,” Mr. Schiff said. “This is not about a single day; it is about a course of conduct by a president to use his office to interfere with the peaceful transfer of power.”

But the proximity could also create complications. Several people familiar with the preparations said the managers were wary of saying anything that might implicate Republican lawmakers who echoed or entertained the president’s baseless claims of election fraud. To have any chance of making an effective case, the managers believe, they must make clear it is Mr. Trump who is on trial, not his party.