McALLEN, Texas — The front door of the Hidalgo County Republican Party’s office is covered with photographs of high-profile politicians in the party: Gov. Greg Abbott, Senator John Cornyn and former President Donald J. Trump. Nearly all of them are white men.

Step inside, and you’ll see a bulletin board with pictures of local Republican leaders: Adrienne Pena-Garza, Hilda Garza DeShazo, Mayra Flores. Nearly all of them are Hispanic women.

Hispanic Republicans, especially women, have become something of political rock stars in South Texas after voters in the Rio Grande Valley shocked leaders in both parties in November by swinging sharply toward the G.O.P. Here in McAllen, one of the region’s largest cities, Mr. Trump received nearly double the number of votes he did four years earlier; in the Rio Grande Valley over all, President Biden won by just 15 percentage points, a steep slide from Hillary Clinton’s 39-point margin in 2016.

That conservative surge — and the liberal decline — has buoyed the Republican Party’s hopes about its ability to draw Hispanic voters into what has long been an overwhelmingly white political coalition and to challenge Democrats in heavily Latino regions across the country. Now party officials, including Mr. Abbott, the governor, have flocked to the Rio Grande Valley in a kind of pilgrimage, eager to meet the people who helped Republicans rapidly gain ground in a longtime Democratic stronghold.

One of those people, Ms. Pena-Garza, the chair of the Hidalgo County Republican Party, grew up the daughter of a Democratic state legislator. As was common for most Hispanic families in the area, she said, voting for Democrats was a given. But after her father switched parties in 2010, Ms. Pena-Garza soon followed, arguing that Democrats had veered too far to the left, particularly on issues like abortion and gun control.

Ms. Pena-Garza said she was called a coconut — brown on the outside, white on the inside — and a self-hating Latino, labels that have begun to recede only in recent years as she meets more Hispanic Republicans who, like her, embrace policies that they view as helping small business owners and supporting their religious beliefs.

Now, she says, the political choice is a point of pride.

“You can’t shame me or bully me into voting for a party just because that’s the way it’s always been,” she said. 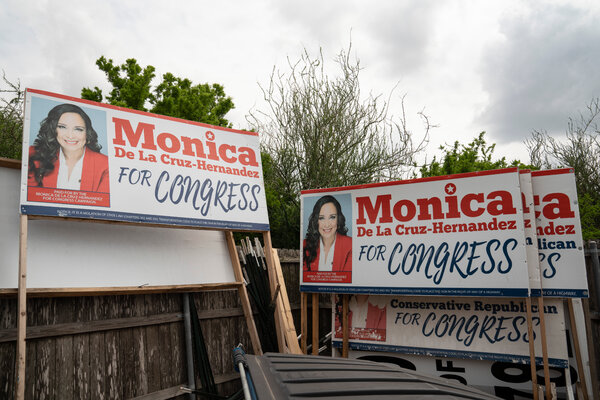 One of the lingering questions of the 2020 election is just what drove this region — and other heavily Hispanic areas of the country — toward Republicans. The shift appeared to be particularly acute among women who call themselves conservative, according to a post-mortem analysis by Equis Labs, a Democratic-aligned research firm that studies Latino voters.

Conversations with voters and activists in Hidalgo County suggested that there is not one answer but many: Women who staunchly oppose abortion voted for the first time; wives of Border Patrol agents felt convinced the Trump administration was firmly on their side; mothers picked up on the enthusiasm for Republicans from friends they knew through church or their children’s school.

For many voters in the region, there is a profound sense of cynicism — a feeling that things will not change no matter who is charge. The border, after all, has been the site of a humanitarian crisis under both Democrats and Republicans. Nearly everyone here knows both undocumented immigrants and Border Patrol agents, occasionally even within the same family. And for many here, law enforcement remains one of the easiest paths to the middle class, and Republicans have portrayed national Democrats as hostile toward the police.

Both Republicans and Democrats are likely this year to start funneling far more money into the region, where enthusiasm for the G.O.P. in 2020 was not limited to Mr. Trump. For the first time in recent history, a Republican came close to defeating the Democratic incumbent in Texas’ 15th Congressional District, which includes most of Hidalgo County and runs north of McAllen up to San Antonio.

In next year’s race for the seat, the Republican candidate, Monica De La Cruz-Hernandez, is again challenging Representative Vicente Gonzalez, a Democrat — but they may be competing on different political terrain if the district’s “bacon strip” shape is altered in redistricting later this year.

At the local Lincoln Reagan Republican dinner in March, Mr. Abbott rallied support for Ms. De La Cruz-Hernandez and encouraged other women like her to come into the G.O.P. fold, speaking in glowing terms about their political potential and saying he had “never been as impressed” with the leadership of a county party.

“I’ve never been onstage with so many accomplished, articulate Latinas as I have been tonight with this group of ladies,” he told an enthusiastic crowd. “This is amazing. If I were the Democrats, I would be very afraid right now, because there is a storm coming, a storm that is going to win Hidalgo County. I wanted to be here in person, wanted to say thank you.”

“You will knock that damn door down,” Mr. Abbott added. “You will shape and reshape politics in the Lone Star State.”

Like many of her supporters, Ms. De La Cruz-Hernandez first registered as a Democrat, largely, she said, so she could vote in local primary elections.

“That was just what you do,” she said. She added that while she could not recall ever having voted for a Democrat for president, she had hesitated to voice her political views publicly, fearing that it could hurt her insurance business. “But I never understood the Democratic values or message being one for me,” she said. “And I am convinced that people here have conservative values. That is really who the majority is.”

During her last campaign, Ms. De La Cruz-Hernandez relied heavily on local efforts, drawing little attention from the national Republican Party in a race she lost by just three points. Now she is focusing early on building support from donors in Washington. Already, the Democratic Congressional Campaign Committee has named Mr. Gonzalez a “Frontline” member, an indication that it views him as one of the most endangered House Democrats. And in March, the National Republican Congressional Committee put Mr. Gonzalez on its 2022 “Exit List” and began airing ads against him.

In an interview, Mr. Gonzalez primarily attributed the closeness of his race last year to the lack of Democratic in-person campaigning amid the coronavirus pandemic, and the high turnout to the particular phenomenon of Mr. Trump, rather than a long-term shift.

“For the Republicans to think that there is some dramatic change, that they should pour attention and money into this district, I think they will be sadly mistaken,” he said. “But I am taking nothing for granted.”

Like other Democrats along the Texas border, Mr. Gonzalez has tried to distance himself from national Democrats; this year he asked Mr. Biden to rescind an executive order to temporarily stop new fracking on federal lands. Last month, he traveled to the border with the Problem Solvers Caucus, a bipartisan congressional group, and he has urged top Biden administration officials to come to the region.

“We’re conservative Democrats down here,” he said. “We support a lot of international trade, we’re an agricultural community, we’re Catholic, we work in the oil fields, we’re avid gun collectors.”

He added: “I think that’s pretty distinguishable from the rest of the Democratic Party. We can’t just assume that all Hispanics are going to stick with Democrats.”

Mr. Gonzalez also attributed the shift toward Republicans in his district in part to misinformation, particularly on YouTube and other forms of social media. And some first-time Republican voters appeared to be swayed by false conspiracy theories.

Elisa Rivera, 40, said she had voted for Mrs. Clinton in 2016, but did not understand the fierce reaction against Mr. Trump.

“I was following along the family tradition, my dad is a hard-core Democrat, my father was really for unions, and I thought the Democrats defended the union,” Ms. Rivera said, before adding: “But then I started to research myself and found out the Democrats are supporting witchcraft and child trafficking and things like that, things that get censored because they get labeled conspiracy theory.”

As a child, Mayra Rivera, 42, worked in the fields with her parents, who arrived in the United States through the bracero program, which brought farmworkers to the country from Mexico. When her family struggled financially, she would walk door to door selling cupcakes. The first few times she voted, Ms. Rivera cast her ballot for Democrats. Even now, she said, her politics do not fit in a neat box.

“My family doesn’t come from money, I have friends who are undocumented, I support medical cannabis,” she said. “But I definitely think Democrats are pushing free everything, giving the message that there’s no value in your hard work, and that’s not something I can believe in.”

Like Ms. Rivera, Jessica Villarreal, 33, was only an occasional voter, and she had no desire to be politically active while she served in the Army. But now she considers herself a faithful Republican and is considering a run for elected office.

“There are more of us who realize our beliefs are Republican, no matter what we’ve been told in the past,” Ms. Villarreal said. “I am a believer in God and the American dream, and I believe the Republican Party represents that.”