Brexit: Gove grilled on Johnson’s ‘over my dead body’ pledge

Director of ExplainTrade, Dimitry Grozoubinski argued that there was going to be a border between Great Britain and Northern Ireland. After just interviewing Chancellor of the Duchy of Lancaster, Michael Gove, Sky News host Niall Paterson was told that this would be the case. Mr Grozoubinski explained how there would be a border within the United Kingdom after Brexit. He said: “Without minimising all the achievements of Michael Gove and the team on this, there will be two different separate sets of rules for products, one on the island of Ireland one on the rest of the United Kingdom. 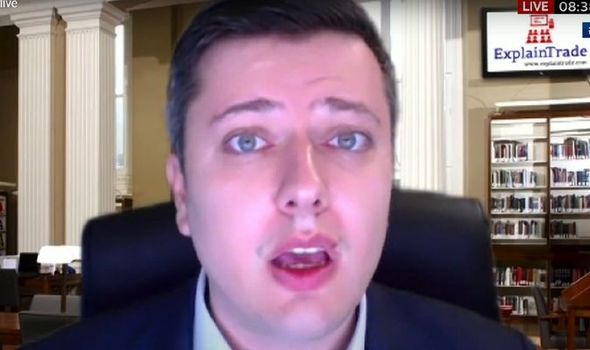 “In order to get goods from one part to the other, they will have to cross a line to which there will be checks, paperwork and inspections on products to separate the goods that can verse the ones that can’t be.

“As a trade professional, I would call that a border and most people would consider that a border but ultimately it is a semantic debate.”

Mr Grozoubinski argued that despite the agreement on the Northern Irish protocol, there was still a real issue of whether a trade deal would be agreed.

He said: “I think it is less about smoothing the glide path as the storm is still absolutely there and it is tossing the plane around.

Brexit: Gove on 'co-operation' with EU over Northern Ireland

“But the giant truck that was parked across the runway has now been removed.

“So landing is just as difficult but when you do land there is not that last-minute impediment, the clauses in the Internal Market Bill that could have blown up a deal even had the issues been resolved.

“That certainly makes things easier and just on its own merits, squaring the circle on how you can have a border in the Irish Sea without it massively disrupting rest of the UK- Northern Ireland trade is a real achievement.

“It generally removes the huge headache about Brexit, from negotiating with the EU point of view.”