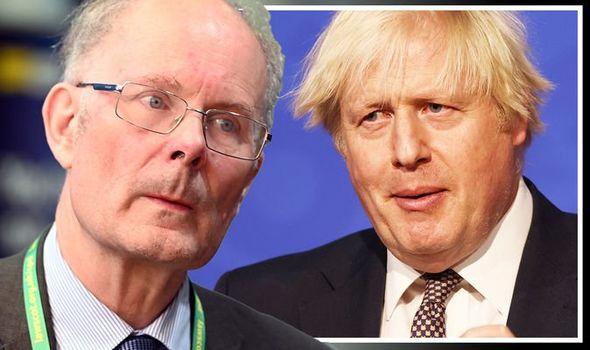 Professor Sir John Curtice said it was “definitely too early” to talk about a Labour resurgence despite the party’s share of the vote going up by 7.4 percent in last week’s Old Bexley and Sidcup by-election. He said this was “relatively small beer” for an opposition party in a by-election and that Labour would struggle until voters had a sense of what it stands for.

Describing the two parties as “even stevens,” he said: “Yes the Tories have for all sorts of reasons lost ground [but] most prime ministers two years in would give their eye teeth to be in the position that Boris currently finds himself in.”

Sir John’s words will be welcomed in Downing St as Mr Johnson tries to navigate a succession of storms and leave behind the fall-out of the Owen Paterson affair. In recent days it has been reported that French president Emmanuel Macron called him “un clown”, Donald Trump said he was a “little on the liberal side”, and he has faced allegations that Downing St staff partied during last year’s winter lockdown.

Sir John acknowledged disquiet in Tory ranks but said it would be “premature” to conclude Mr Johnson is no longer an election-winner. He said: “Where he’s in most trouble is frankly with his own parliamentary party. The Owen Paterson affair just did him so much damage with his relationships with his colleagues, and his colleagues clearly don’t have much loyalty to him.

“Obviously, if the party were to really hit trouble [then] they might well dump him if they think he is going to lead them to defeat but I think it would be premature to draw that conclusion at the moment.”

Liberal Democrats are talking-up their chances of winning the December 16 North Shropshire by-election, triggered by the resignation of Mr Paterson in the wake of the controversy about his lobbying activities and the Conservative attempt to block his censure. Liberal Democrat Leader Sir Ed Davey hopes to repeat the success his party enjoyed in the June Chesham and Amersham by-election when it turned the seat from blue to yellow.

Sir Ed said: “Boris Johnson is facing a nightmare before Christmas in North Shropshire,” adding: “This by-election is a chance for them to send Boris Johnson a message he can’t ignore. The Liberal Democrats’ stunning victory in Chesham and Amersham showed that we can win against the odds in former Conservative heartlands. Now North Shropshire could be the next brick in the Blue Wall to crumble.”

Sir John was less optimistic about Lib Dem chances. He said: “It’s a much more difficult proposition. Chesham and Amersham was a pro-Remain constituency in which the Conservative vote had already been falling [and] North Shropshire is a pro-Leave constituency.”

Warning that the Lib Dems could struggle to build momentum, he said: “If most voters are (a) focusing on their Christmas shopping and (b) whether they can or cannot go to a Christmas party, it’s the worst possible time to try and persuade people to focus on politics.”

However, a veteran Conservative MP said: “I’ve heard we’re losing North Shropshire. I’m hearing from colleagues who’ve been up there that it’s a goner. It’s going to be Amersham 2.” The MP was in no doubt what the Government needed to do to move forward.

“We’ve got to get a grip with the illegal migrants,” they said. “That’s the biggest issue by far.” Sir John doubted that people frustrated with the Government’s handling of the issue would turn to Sir Keir’s party, although he acknowledged that Reform UK – the successor to the Brexit Party which finished third behind Labour and the Tories in the Old Bexley and Sidcup by-election – could pose a risk.

He said: “The good news for the government is that however discontented their supporters might be about the migrants coming across the Channel I doubt if many people are going to switch to the Labour party because of that issue. The risk is that Reform UK pick [it] up successfully.

“The trouble is they are not doing well enough in elections for the BBC to feel obliged to put them on air very often so therefore people don’t necessarily know that Reform UK might actually be willing to try to take a tougher line.”

Reform UK, he argued, could create serious problems for the Conservatives if, unlike the Brexit Party, the party stood against them in constituencies they are defending in a general election. Warning of the damage that could result from the Tories losing two percent to Reform UK, he said: “[We] do have to remember that the Tories have no friends in the House of Commons; if they fall below 326 [MPs] they will find it very difficult to remain in office.”