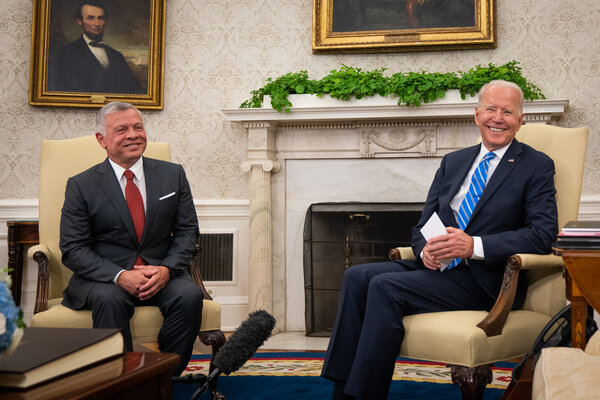 President Biden on Monday met with King Abdullah II of Jordan at the White House, a critical visit for a foreign leader seeking to demonstrate that his country is back in favor with the United States after four years of a deeply troubled relationship with former President Donald J. Trump.

During his 22 years in power, King Abdullah has been seen by American presidents as a moderate, reliable ally in the Middle East, often playing the role of envoy from the Arab world in Washington.

That special relationship ended with Mr. Trump, who favored working with Saudi Arabia and the Gulf States instead.

“Trump’s departure is a huge relief to him,” said Martin S. Indyk, a former U.S. ambassador to Israel and a former special envoy for Israeli-Palestinian negotiations. “Jared Kushner developed a bromance with M.B.S., and Jordan was essentially left out in the cold,” he added about Mohammed bin Salman, the crown prince of Saudi Arabia.

King Abdullah, for instance, was not consulted on the Trump administration’s Mideast peace plan, which in its original version provided for annexation of the Jordan Valley. And King Abdullah was also worried that American aid to Jordan was in jeopardy during the Trump era.