Representative Matt Gaetz, Republican of Florida, was one of President Donald J. Trump’s most vocal allies during his term, publicly pledging loyalty and even signing a letter nominating the president for the Nobel Peace Prize.

In the final weeks of Mr. Trump’s term, Mr. Gaetz sought something in return. He privately asked the White House for blanket pre-emptive pardons for himself and unidentified congressional allies for any crimes they may have committed, according to two people told of the discussions.

Around that time, Mr. Gaetz was also publicly calling for broad pardons from Mr. Trump to thwart what he termed the “bloodlust” of their political opponents. But Justice Department investigators had begun questioning Mr. Gaetz’s associates about his conduct, including whether he had a sexual relationship with a 17-year-old that violated sex trafficking laws, in an inquiry that grew out of the case of an indicted associate in Florida.

It was unclear whether Mr. Gaetz or the White House knew at the time about the inquiry, or who else he sought pardons for. Mr. Gaetz did not tell White House aides that he was under investigation for potential sex trafficking violations when he made the request. But top White House lawyers and officials viewed the request for a pre-emptive pardon as a nonstarter that would set a bad precedent, the people said.

Aides told Mr. Trump of the request, though it is unclear whether Mr. Gaetz discussed the matter directly with the president. Mr. Trump ultimately pardoned dozens of allies and others in the final months of his presidency, highlighting his willingness to wield his power to help close supporters and lash out against the criminal justice system.

In recent days, some Trump associates have speculated that Mr. Gaetz’s request for a group pardon was an attempt to camouflage his own potential criminal exposure.

Either way, Mr. Gaetz’s appeal to the Trump White House shows how the third-term congressman sought to leverage an unlikely presidential relationship he had spent years cultivating.

Few Republicans in Congress became more closely associated with Mr. Trump during his presidency than Mr. Gaetz. Though he had initially supported his fellow Floridian Jeb Bush in the 2016 Republican primary race, Mr. Gaetz latched his political fortunes to Mr. Trump during the campaign and found stardom in the Republican Party, becoming one of Mr. Trump’s greatest defenders.

This account of Mr. Gaetz’s dealings with the Trump White House is based on interviews with four people briefed on the exchanges about his pardon request and other Trump confidants. A spokesman for Mr. Trump declined to comment.

Mr. Gaetz has denied having sex with a 17-year-old or paying for sex. A spokesman denied that he privately requested a pardon in connection with the continuing Justice Department inquiry.

“Entry-level political operatives have conflated a pardon call from Representative Gaetz — where he called for President Trump to pardon ‘everyone from himself, to his administration, to Joe Exotic’ — with these false and increasingly bizarre, partisan allegations against him,” the spokesman said in a statement. “Those comments have been on the record for some time, and President Trump even retweeted the congressman, who tweeted them out himself.”

Though Mr. Gaetz had little formal power in the House, where he remains a backbencher, he offered Mr. Trump what he craved and what Republican congressional leaders would not always offer: fierce loyalty and a taste for bare-knuckle political combat.

In his memoir published last fall, “Firebrand: Dispatches from the Front Lines of the MAGA Revolution,” Mr. Gaetz recalled his first one-on-one phone call with the president in late 2017. Mr. Trump had seen Mr. Gaetz on Fox News attacking Robert S. Mueller III, the special counsel, and thought he had heard an ally.

“I need warriors, you know what I mean?” the president told him.

Mr. Gaetz knew precisely. Though he came from the more conservative Florida Panhandle, the young congressman shared Mr. Trump’s taste for boasts, particularly about sexual exploits, and a knack for self-promotion. Neither was particularly impressed by the trappings of traditional power in Washington, and both were sons of powerful men. Mr. Gaetz’s father, Don Gaetz, was the president of the Florida Senate and a wealthy businessman, and Mr. Trump’s father a successful real estate developer in New York.

After Democrats took back the House in 2018 and began cranking up pressure on the Trump administration, Mr. Gaetz emerged as a standout in what he called the “warrior class” of lawmakers who made it their mission to protect the president.

“The president has called me when I was in my car, asleep in the middle of the night on my Longworth Office cot, on the throne, on airplanes, in nightclubs, and even in the throes of passion (yes, I answered),” Mr. Gaetz boasted in his book.

When Democrats called Michael D. Cohen, the president’s former fixer, to testify against him in early 2019, Mr. Gaetz threatened to reveal what he said were extramarital affairs by Mr. Cohen. Democrats accused him of witness intimidation and the Florida Bar, of which Mr. Gaetz is a member, investigated.

Mr. Gaetz brought the first impeachment investigation into Mr. Trump, later that year, to a halt, albeit briefly, when he led dozens of Republican lawmakers into investigative hearing rooms and refused to leave.

Mr. Trump publicly singled out Mr. Gaetz, saying he was a “great talent, young, handsome,” thanking him for his advocacy on the president’s behalf and predicting Mr. Gaetz was “going places.” 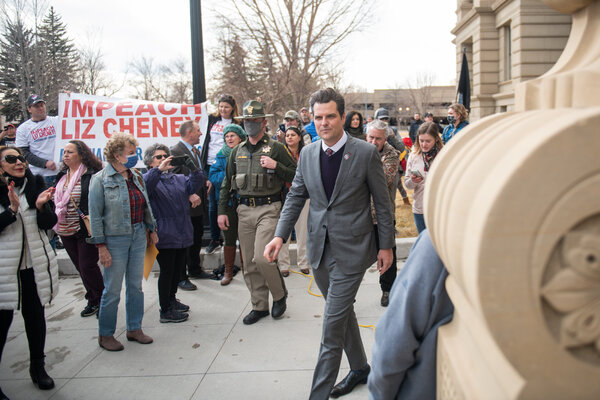 “He was not on people’s radar until he started showing up next to Trump at rallies,” said Alex Conant, a Republican political strategist and a former senior aide to Senator Marco Rubio of Florida.

“The president would see him on Fox, defending the president, which was a good way to get close to the Trump White House,” Mr. Conant added. “A lot of members tried to do that. Matt Gaetz did exceptionally well.”