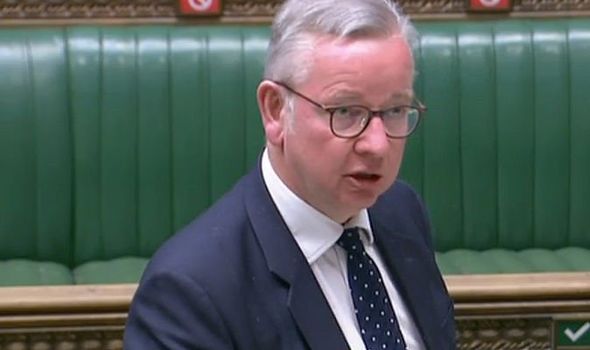 The Cabinet Office Minister faced questions in the House of Commons this afternoon over accusations of “Tory sleaze”. The Government have been under pressure following accusations close contacts of ministers have received preferential treatment.

The alleged scandal has exploded in recent weeks, with former Prime Minister David Cameron being accused of using his links to the Treasury to lobby on behalf of the now-defunct finance firm Greensill Capital, which was employing him as an adviser.

There have also been concerns raised over personal texts sent by British entrepreneur Sir James Dyson to Boris Johnson over the tax status of his employees, and whether the Prime Minister used Conservative party donors to pay for his Downing Street flat to be refurbished.

His rebuttal came in response to an urgent question from SNP MP Alison Thewliss.

She told the Commons: “From the contracts to the Health Secretary’s pub landlord to the cosy chumocracy of the Greensill Capital affair to the casual text messages between the Prime Minister and Sir James Dyson promising to fix tax issues apparently in exchange for ventilators we never even got, and now questions over the Prime Minister’s funding for feathering his Downing Street nest.

“I wonder if the minister will agree with me that this is a clear pattern of behaviour and it absolutely stinks.

“This UK Tory Government is about to prorogue this House to duck further scrutiny.

“In the absence of an independent adviser to investigate ministers, we can no longer trust them to investigate themselves and that much is clear so will the Minister for the Cabinet Office instead instruct a full independent public inquiry to get to the bottom of this sleekit, grubby cabal in charge of the UK?”

Responding to the question, the Cabinet Office Minister addressed the accusations point by point.

He said: “She raised the whole question of PPE. It is a fact, well attested that less than 0.5 percent of the PPE procured did not meet the standards that we had set out.

“It is a fact that every single recommendation for the procurement of PPE went through an independent eight stage process, verified by independent civil servants.

“It is the case that the Government operating at a time when the pandemic was raging, did everything possible, and we make no apology for it, to make sure those on the front line got the equipment they deserve. And the techniques that we used and the processes that we followed, not only stand up to scrutiny, they were same techniques and the same processes used by the Welsh Government, the Scottish Government, and by the Northern Ireland Executive.

“She raises the Greensill question, of course the truth is that all the efforts on behalf of that company, in order to push the Treasury and others were rejected.

“She raises the issue of Sir James Dyson, she doesn’t acknowledge the fact that Sir James spent millions of pounds of his own money in order to try and ensure that we had ventilators to save those on the front line.

“She doesn’t mention that the ventilator challenge was investigated by the Public Accounts Committee, who said it was a model of public procurement.

He added: “What she doesn’t mention is that she and other Opposition members criticised the appointment of a vaccine tsar as cronyism, when Kate Bingham has been responsible for saving millions of lives.

“What she doesn’t say is that Opposition MPs criticised Kate Bingham for spending money on PR when that money was there to ensure people from BAME backgrounds were able to get the vaccines that they required.

“What she doesn’t acknowledge is the determined efforts by public servants in this Government and others to deal with the pandemic and save lives, instead she tries to score political points in a way, sadly, that causes regret.”