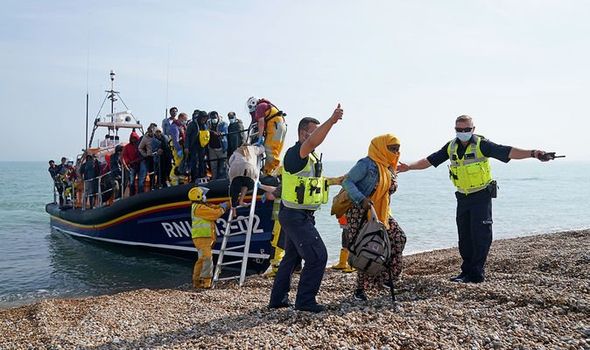 A baby and several young children were among those pictured arriving on a packed lifeboat at a beach in Dungeness in Kent. The huge number is thought to be due to the fine weather. It is well over the previous record of 828 for a single day on August 21.

The Prime Minister was responding to a question from Tory MP Jacob Young in the Commons yesterday.

Mr Young argued that the ability to provide Afghans with safe passage here was strained by “the continuing uncontrolled illegal migration on the English Channel”.

Mr Johnson said: “My honourable friend is completely right. France is faced with a very difficult problem. A large number of people want to come to this country and we are doing everything we can to encourage the French to do the necessary and impede their passage.

“But I know the Home Secretary is working right around the clock to ensure that we not only encourage the French to stiffen their sinews and stop people making the journey, but we use every possible tactic available to us as well.”

His remarks came hours after a lifeboat picked up migrants from a dinghy and brought them to Dungeness.

A second dinghy was on the shingle with discarded lifejackets around it.

As officials led passengers away, one woman was seen clutching a small baby in a sling. Boys and girls were being carried or escorted to safety among several men and women.

Three large white coaches were seen parked up on land nearby.

Witnesses have described authorities including Border Force and the RNLI lifeboat crews as looking very busy as a stream of crossings was under way on calm waters and under sunny skies.

It followed Sunday’s first small boat voyages for more than two weeks following a spell of unsettled weather. Some 158 people, including a baby and four toddlers, arrived in Dover from four craft.

Arrivals brought the total number of people who have crossed to the UK aboard small boats this year to more than 12,500, according to latest data.

Dan O’Mahoney, Border Force’s clandestine Channel threat commander, said: “This unacceptable rise in dangerous crossings is being driven by criminal gangs and a surge in illegal migration across Europe.”

Ms Patel wants tougher penalties for illegal migrants and has vowed to make the Channel route “unviable” for them.