The Justice Department has created new regulations allowing for the use of more methods for federal executions, including firing squad and electrocution.

The new rule, which is scheduled to be published in the Federal Register on Friday, comes as the administration rushes to execute five more prisoners before the end of President Trump’s term. It is part of a spate of moves and rule-making processes before he leaves office.

Unlike in some of the final-hour decisions, the practical effect of the rule remains unclear. The Justice Department has not indicated that it plans to execute inmates by a manner other than lethal injection, which has been the only method of execution the federal government has used in decades. Although lethal injection has come under increasing legal assault, the Supreme Court has already rejected recent challenges to it presented by inmates on federal death row. And President-elect Joseph R. Biden Jr., who can rescind the rule, has signaled his opposition to the federal death penalty.

Last week, the Justice Department announced that it plans to execute three more inmates on federal death row. If the administration does so, along with two other executions already scheduled, it will have put 13 prisoners to death since July, marking one of the deadliest periods in the history of federal capital punishment since at least 1927, according to data from the Federal Bureau of Prisons.

The rule, reported earlier by ProPublica, stipulates that the federal government may conduct executions by lethal injection “or by any other manner prescribed by the law of the state in which the sentence was imposed or which has been designated by a court in accordance with” the law that governs implementation of the death sentence. It will go into effect 30 days after its scheduled publication on Friday, before some of the executions are set to take place.

All states that use the death penalty allow execution by lethal injection, according to the rule. Some also authorize other means. For example, Alabama allows the prisoner to elect a death by electrocution or nitrogen hypoxia (a lethal dose of gas) instead of lethal injection. A law signed by the governor of Utah in 2015 states that a firing squad shall be used to execute an inmate if substances for lethal injection are unavailable on the scheduled date. 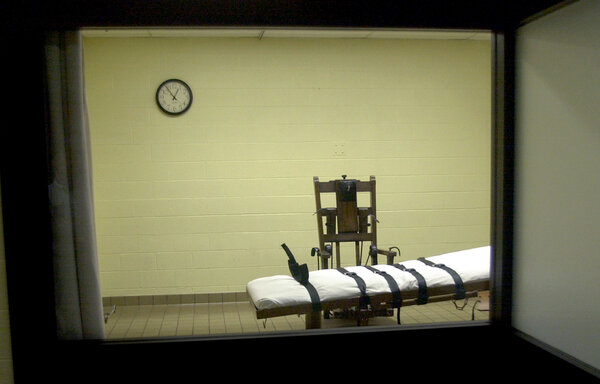 States have already struggled to obtain suitable drugs for their lethal injection protocols. Several years ago, reports of high-profile botched executions, which involved prisoners who reportedly gasped or writhed in pain, prompted new scrutiny over the death penalty. After an instance in Oklahoma, President Barack Obama directed his attorney general to review the application of the death penalty in the United States.

Federal executions carried out since the Trump administration ended a nearly two-decade hiatus on the practice have been exclusively by lethal injection. The government’s protocol uses a single chemical, pentobarbital, for which the Supreme Court cleared the way in June.

The rule recently finalized by the Trump administration concerns how the federal government must comply with state execution protocols. The Federal Death Penalty Act requires executions to be carried out “in the manner prescribed by the law of the state in which the sentence is imposed.”

When it filed an initial version of the rule published in August, the Justice Department noted that a state might one day require executions to be conducted by a means other than lethal injection. The proposed rule said it sought to forestall challenges by prisoners to their executions because federal regulations did not authorize execution by means other than lethal injection.

Agencies are generally supposed to allot at least 60 days for public comment. The Trump administration gave only 30 days for the proposed rule.

Steve Vladeck, a law professor at the University of Texas, noted that Mr. Biden could reverse the rule, but said that it represented a “symbolic” and “deeply practical” step by the department to carry out its five scheduled executions.

“It’s a pretty gruesome way to go out,” he said. “This is basically the attorney general doubling down on, you know, sort of making it possible to execute as many federal prisoners as he can before his tenure is over.”

He also highlighted recent legal hurdles that the Justice Department faced in death penalty litigation. Before the execution of a federal inmate, Orlando Cordia Hall, last week, the U.S. Court of Appeals for the District of Columbia Circuit ruled that the department’s lethal injection protocol could violate the Federal Food, Drug and Cosmetic Act. That law requires a prescription for the execution drug, pentobarbital. But the court still declined to issue in an injunction in the case.

In its effort to revive the death penalty under the Trump administration, the Justice Department declined to use the three-drug cocktail it had once used and instead introduced a protocol using a single drug, pentobarbital.

The announcements from the Justice Department for the five scheduled executions said four prisoners would be executed by lethal injection at the federal penitentiary in Terre Haute, Ind. The department did not specify the manner of execution for one prisoner, Dustin John Higgs, convicted of kidnapping and murdering three women. A Justice Department official who spoke on the condition of anonymity also did not comment on his method of execution.

Ruth Friedman, the director of the Federal Capital Habeas Project, who represented the first man executed by the Trump administration, called the rule a “grand arrogation of power.” She criticized the department’s decision to strip some judicial oversight. The rule removed a requirement that a government lawyer submit to the court, among other matters, the date and place of the execution, part of a provision the department deemed redundant.

Ms. Friedman also said that, more troubling than the rule, was the administration’s intention to execute prisoners so shortly before a new administration that has signaled opposition to capital punishment.

The Justice Department official defended the decision, saying that the regulations were intended to align federal sentences with the law.

Robert Dunham, the executive director of the Death Penalty Information Center, expected that the new rule would most likely result in fewer and less complicated legal challenges to executions, but that it would quickly become immaterial under an administration that does not seek to execute inmates.

“It tells us more about how much the administration wants to kill prisoners than it does about any real correctional need,” he said.