WASHINGTON — Pentagon officials placed “unusual” restrictions on the D.C. National Guard before the Capitol riot, its commander told senators on Wednesday, saying the military leaders’ fears of a repeat of aggressive tactics used during racial justice protests last year slowed decision-making and squandered time as the violence by a pro-Trump mob escalated.

Military and federal security officials detailed in a joint Senate committee hearing the additional security breakdowns that led to the failure to quell the mob attack on Jan. 6. Maj. Gen. William J. Walker, the D.C. National Guard commander, said he did not receive approval to mobilize troops until more than three hours after he had requested it.

The delay he outlined was longer than previously known and came to light in the latest hearing by lawmakers investigating the attack.

Days before the riot, the Pentagon had removed General Walker’s authority to quickly deploy his troops, he testified. He said he was unable to move troops even from one traffic stop to another without permission from Ryan D. McCarthy, the Army secretary. Once General Walker had approval for deployment, the Guard arrived at the Capitol only minutes later, at 5:20 p.m., and helped re-establish the security perimeter on the east side of the building.

General Walker said he could have had 150 troops to the complex hours earlier. The violent rampage that unfolded over nearly five hours caused injuries to nearly 140 police officers and left five people dead.

“That number could have made a difference,” General Walker said of the possibility of deploying his troops earlier.

In response to questions from senators, General Walker said he believed that a double standard existed in the military decision-making, pointing out differences between the quick and aggressive tactics he was authorized to use during protests last spring and summer of police killings of Black men and the slower response to the violence of Trump supporters. He said military officials had expressed concerns about the optics of sending troops into the Capitol to subdue Americans.

“The Army senior leaders did not think that it looked good” and did not think “it would be a good optic,” General Walker said. “The word I kept hearing was the ‘optics’ of it.”

When asked whether a similar debate had played out last year, General Walker said no.

“Did you think that was unusual?” asked Senator Gary Peters of Michigan, the Democratic head of the Homeland Security Committee.

“I did,” General Walker said.

The restrictions were put in place because of the widely criticized crackdown by the Guard on mostly peaceful protesters in Washington in June, said Robert G. Salesses, a senior Defense Department official testifying at the hearing.

He said that Mr. McCarthy and other military officials, including Christopher C. Miller, the acting defense secretary, delayed deciding whether to deploy forces on Jan. 6 because they wanted to know more about what the troops would be doing. They had assumed deployment authority over the D.C. National Guard to avoid a repeat of last year, Mr. Salesses said.

“Secretary Miller wanted to make the decisions of how the National Guard was going to be employed on that day,” Mr. Salesses testified.

General Walker recounted how the day had unfolded as Trump supporters protesting congressional certification of the election results devolved into violence. He said he had received a “frantic call” at 1:49 p.m. from Steven A. Sund, then the chief of the Capitol Police, about half an hour before rioters breached the Capitol.

“Chief Sund, his voice cracking with emotion, indicated that there was a dire emergency at the Capitol,” General Walker testified. “He requested the immediate assistance of as many available National Guardsmen that I could muster.”

He said he had immediately alerted Army leaders and even put troops on buses “ready to move to the Capitol.” But Mr. Miller did not approve the request until 3:04 p.m., after military officials had expressed their concerns about optics. General Walker did not receive word that Pentagon officials had authorized his request until 5:08 p.m. — three hours and 19 minutes after he had received Chief Sund’s plea. 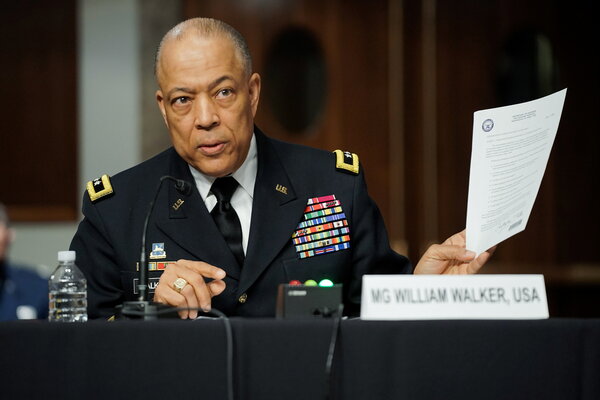 “I just keep thinking of the hours that went by, and the people who were injured and the officers whose lives were changed forever,” said Senator Amy Klobuchar, Democrat of Minnesota and the chairwoman of the Senate Rules Committee. “We must get to the bottom of why, that very day, it took the Defense Department so long to deploy the Guard.”

After hearing General Walker’s testimony, Senator Roy Blunt of Missouri, the top Republican on the committee, told reporters he wanted to hear from higher-ranking military officials.

“Certainly we’ll have questions for Secretary McCarthy and for acting Secretary of Defense Christopher Miller,” Mr. Blunt said. “It’s definitely going to require an opportunity to ask them questions about their view from their perspective of why this decision-making process went so horribly wrong.”

The testimony came at the latest bipartisan investigative hearing of the Homeland Security and Rules Committees. At a hearing last week, Chief Robert J. Contee III of the Metropolitan Police Department in Washington testified that he was “stunned” at the slow deployment of the National Guard on Jan. 6, noting that even as the violence escalated, the Army had expressed reluctance to send troops.

At that hearing, the first joint oversight meeting of the two committees, three former top Capitol security officials deflected responsibility for failures that contributed to the riot, blaming the other agencies, one another and at one point even a subordinate for the breakdowns that allowed hundreds of Trump supporters to storm the Capitol.

The officials testified that the F.B.I. and the intelligence community had failed to provide adequate warnings that rioters planned to seize the Capitol and that the Pentagon was too slow to authorize Guard troops to help overwhelmed police forces after the attack began.

In addition to General Walker and Mr. Salesses, the officials who testified on Wednesday were Melissa Smislova, a senior official from the Department of Homeland Security’s Office of Intelligence and Analysis, and Jill Sanborn, the F.B.I.’s assistant director of its counterterrorism division.

After the attack, law enforcement officials have been focusing on rioters who are members of militias and extremist groups as part of their investigation. Ms. Sanborn testified that few of the 257 rioters arrested so far were being investigated by the F.B.I. before the attack.

“I can only recall from my memory one of the individuals that was under investigation prior,” she said.

The testimony came as the Capitol Police said they were increasing security this week on Capitol Hill, warning of “potential threats toward members of Congress or toward the Capitol complex.”

Testifying at a House hearing, Yogananda D. Pittman, the acting Capitol Police chief, told lawmakers that her agency had received “concerning” intelligence about possible threats against the Capitol for Thursday. But she said the information was law-enforcement sensitive and she would share it only in a closed briefing. She assured committee members that the police force would be ready.

Chief Pittman noted that threats against lawmakers were “through the roof,” rising almost 94 percent the first two months of this year over 2020.

After Jan. 6, the Capitol Police leadership is asking for almost $620 million in total spending, an increase of nearly 21 percent over current levels to pay for new equipment, training and an additional 212 officers for assignments such as a permanent backup force. Chief Pittman also told the lawmakers that she would be working with the architect of the Capitol to design more “physical hardening” of the building after it was overrun by the rioters.