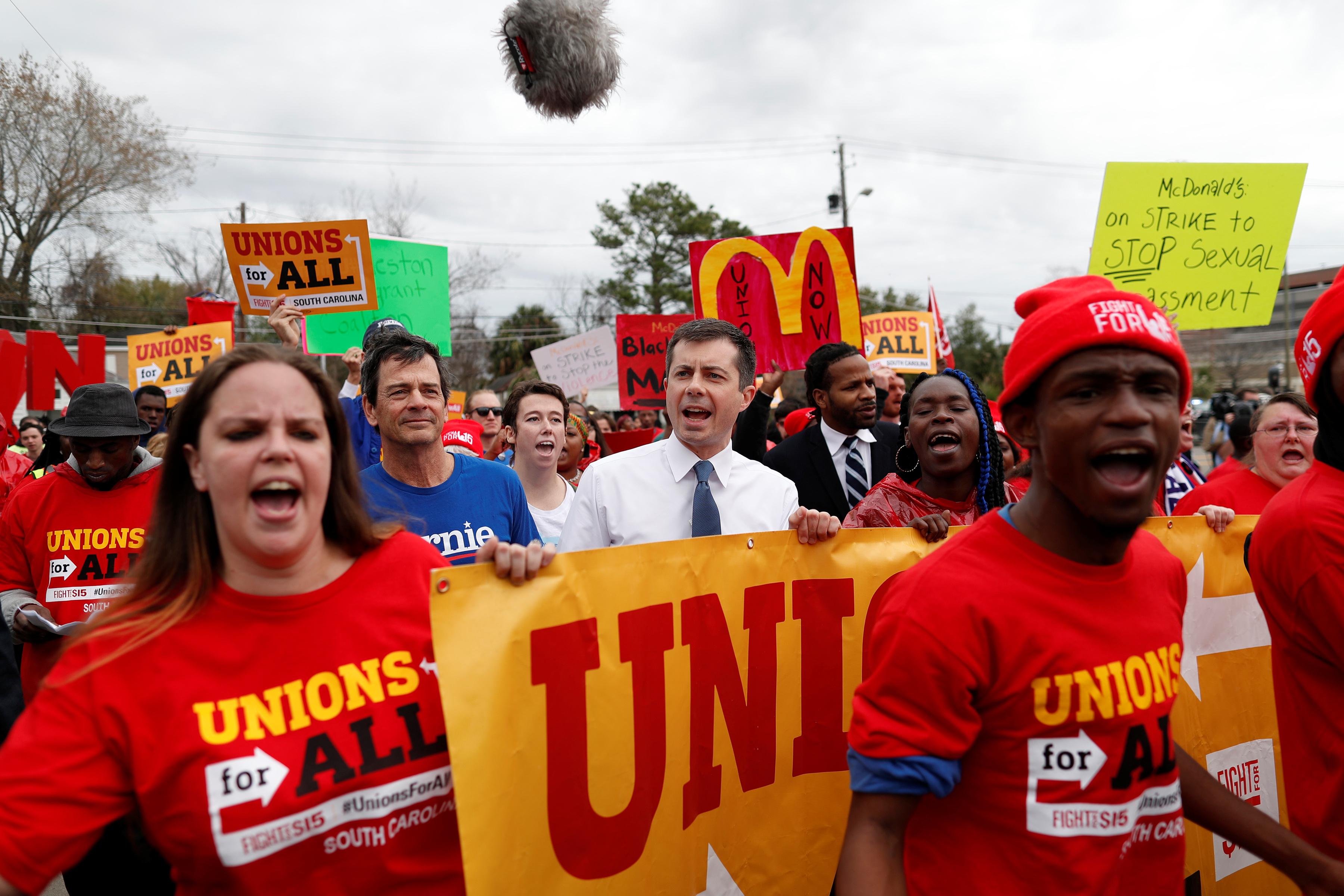 Sanders and his top rivals, including former Vice President Joe Biden and former New York City Mayor Bloomberg, headed into an intense period of campaigning before Saturday’s South Carolina primary — their first big test with African-American voters — and the 14-state Super Tuesday contest on March 3 that will offer the largest number of votes so far.

Sanders’ victory in the Nevada caucuses, which followed strong performances in Iowa and New Hampshire, has stoked concern among establishment Democrats who see the self-described democratic socialist as too liberal to defeat Republican President Donald Trump in November.

Here are some Monday highlights from the campaign trail:

The campaign for Bloomberg, a billionaire who is self-financing his presidential bid, said vandals on Sunday night defaced its Chicago office with the word “oligarch.”

Bloomberg’s campaign called on Sanders to denounce the vandalism, which followed a similar defacements of several Bloomberg offices in recent weeks.

“While we do not know who is directly responsible, we do know Senator Bernie Sanders and his campaign have repeatedly invoked this language, and the word ‘oligarch’ specifically when discussing Mike Bloomberg,” Bloomberg campaign manager Kevin Sheekey said in a statement. “This needs to end before someone gets hurt.”

The Sanders campaign declined to comment on the allegations.

Tensions between the two camps have been rising since Wednesday’s debate in Las Vegas, when Bloomberg asserted that Sanders would lose the general election to Trump should he become the Democratic nominee.

Turnout for Nevada’s Democratic caucuses on Saturday was 105,195, the Nevada State Democratic Party said, surpassing the 84,000 voters who participated in the party’s 2016 Nevada caucuses.

The turnout fell short of the record 118,000 people who participated in the 2008 caucus, won by Hillary Clinton.

‘PETE CAN’T BE OUR PRESIDENT’

Former South Bend Mayor Buttigieg marched with McDonald’s workers in Charleston who are demanding a $15 minimum wage. Buttigieg joined the front of the line, helping carry a large sign that read “Unions for All” while workers chanted.

Most of the marchers are black, a demographic whose support Buttigieg has struggled to win in public opinion polls.

A group of counter-protesters wearing shirts that read “Black Voters Matter” disrupted the speeches with chants: “Pete can’t be our president. Where was $15 in South Bend?”

Buttigieg briefly addressed them, saying, “No matter who you support for president, I support you and I support unions and a $15 minimum wage.”

After he spoke, Buttigieg broke into a near-running trot to avoid protesters looking to confront him before hopping into a black SUV.

U.S. Senator Sanders faced criticism from Florida Democrats for comments about Castro in an interview with the television program “60 Minutes” broadcast on Sunday.

“We’re very opposed to the authoritarian nature of Cuba but you know, it’s unfair to simply say everything is bad. You know?” Sanders said, referring to the late revolutionary leader. “When Fidel Castro came into office, you know what he did? He had a massive literacy program. Is that a bad thing? Even though Fidel Castro did it?”

That drew blowback from elected Democrats in Florida, one of the battlegrounds of the general election and home a large population of people who fled Cuba during Castro’s rule and their descendants.

“I’m hoping that in the future, Senator Sanders will take time to speak to some of my constituents before he decides to sing the praises of a murderous tyrant like Fidel Castro,” said Representative Donna Shalala, on Twitter.

Biden rolled out an affordable housing plan aimed at protecting tenants from eviction and increasing access to lending. His campaign has focused heavily on South Carolina, where Biden has had strong support from black voters who fondly remember his role in the historic presidency of Barack Obama.

He promoted the plan at a community resource center in North Charleston, where the campaign says evictions greatly outpace the national average.

“Imagine being a man or woman who breaks their neck working a full-time job and literally worried that their kid will not have a place to rest their head at night,” Biden said.

His plan would increase safeguards against discrimination in lending, provide additional legal services to people facing eviction and put in place a mediation program that would seek to avoid costly and long legal battles.

He also repeatedly invoked an affordable housing bill by U.S. Representative James Clyburn of South Carolina, who is expected to endorse Biden after the party holds its next debate in Charleston on Tuesday. 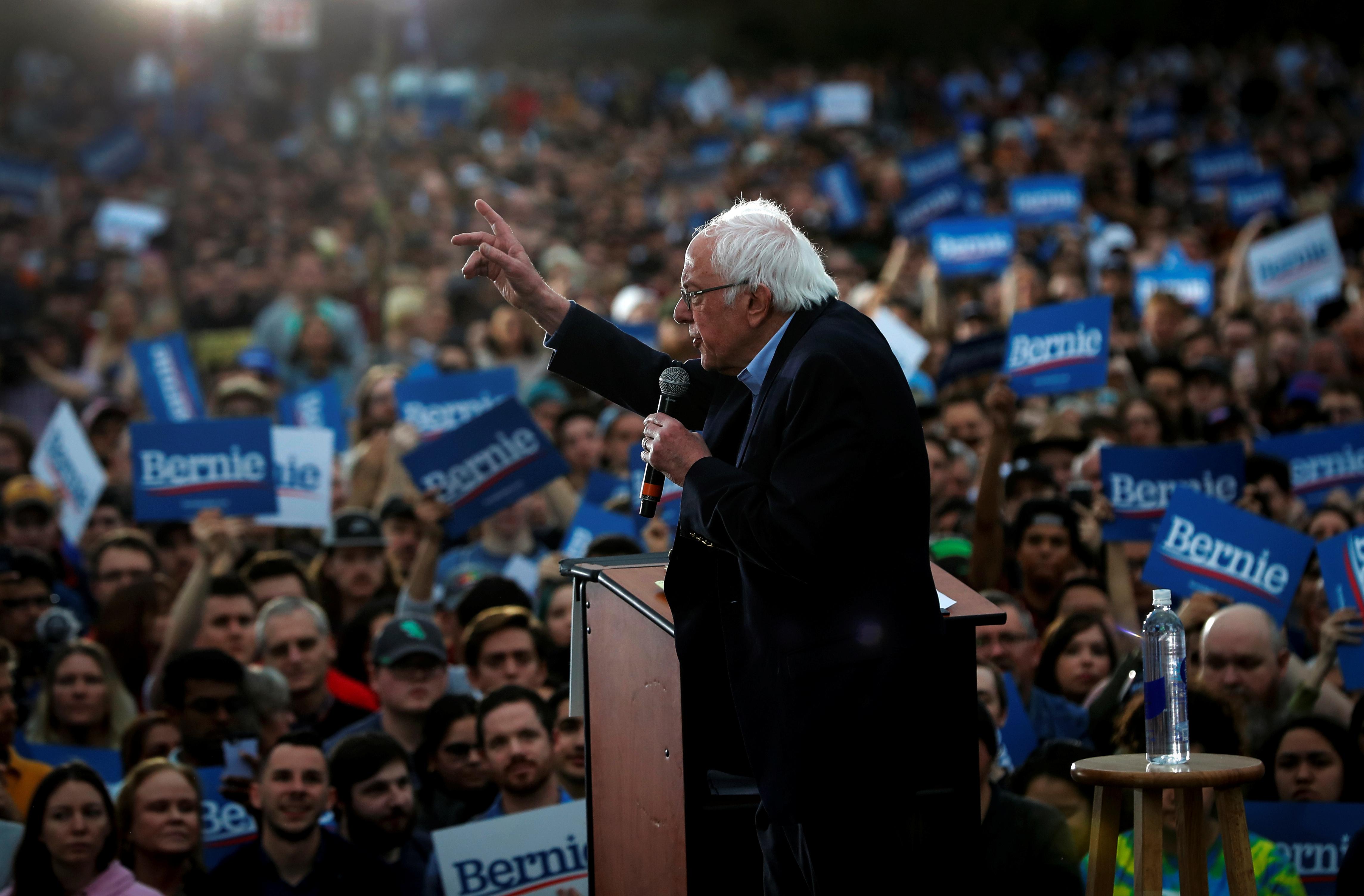 Sanders is proposing massive overhauls of the U.S. economy, including banning private health insurance in favor of a government-run system that guarantees universal health coverage.

On Monday, Sanders unveiled another big social spending plan that would dedicate $1.5 trillion over 10 years to create a universal child care and early education system, to be funded by taxing the wealthiest Americans.