MCCLELLANVILLE, S.C/WINSTON-SALEM, N.C. (Reuters) – Democratic presidential hopefuls spread out across South Carolina on Thursday as the clock ticked down to the state’s Saturday primary, the first big test of their appeal with African-American voters. 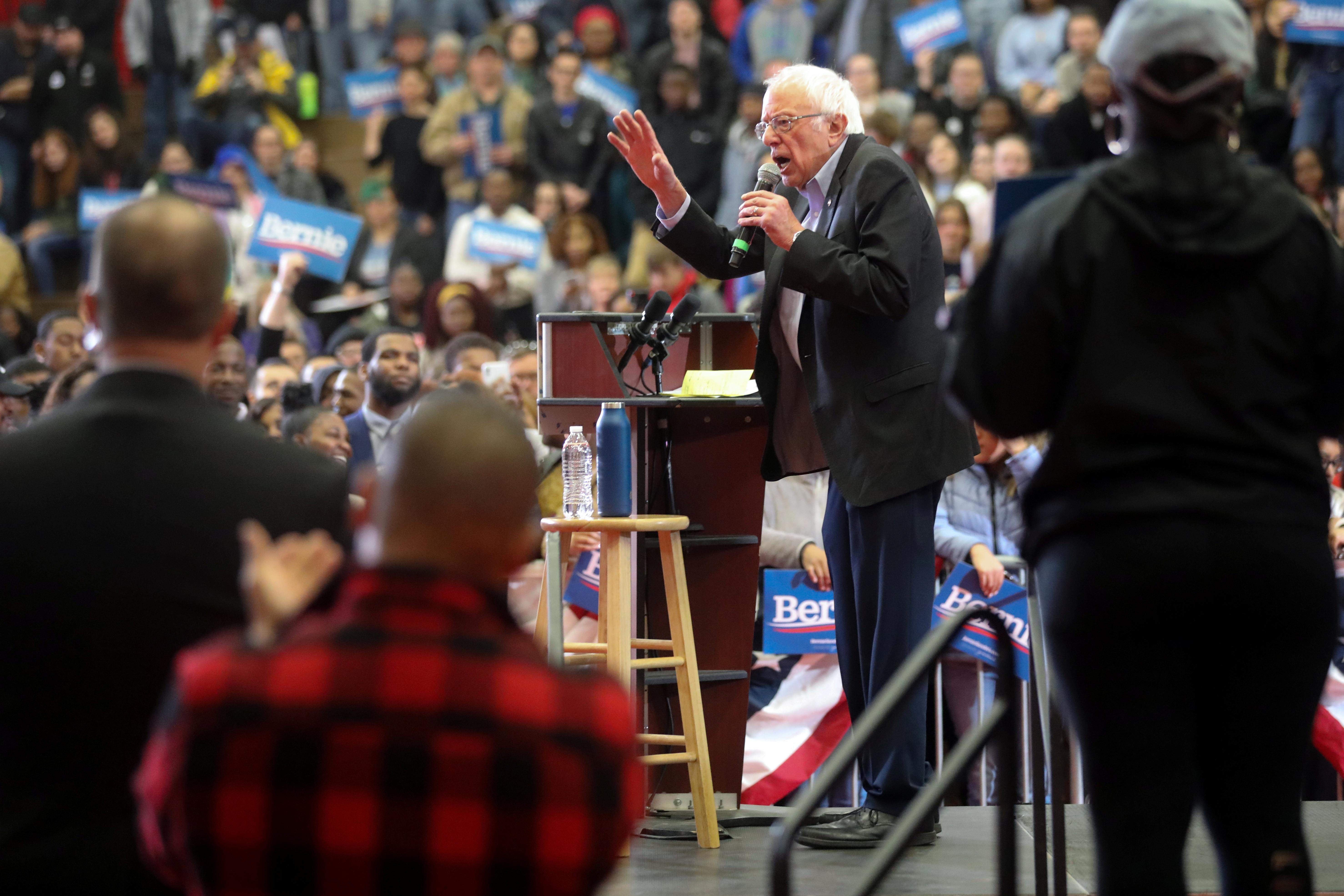 Several candidates also headed to some of the Super Tuesday regions, the 14-state March 3 contest that offers the largest single-day haul of delegates in the Democratic Party’s White House nominating battle.

“PLAYING POLITICS WITH OUR HEALTH”

Democratic candidates attacked Republican U.S. President Donald Trump’s handling of the coronavirus outbreak on Thursday, as stocks plunged on fears of the growing outbreak and news that a California patient had contracted the disease from an unknown source, without having traveled to China or been in close contact with someone who had contracted the virus there.

“We need a president who does not play politics with our health and national security,” said Vermont Senator Bernie Sanders, the national Democratic frontrunner who advocates free government-funded health coverage for all Americans.

His comments came after Trump held a news conference on Wednesday saying the risk from the virus was “very low” in the United States and put Vice President Mike Pence in charge of the response.

Sanders said Thursday that Pence was “completely unqualified” and called Treasury Secretary Steven Mnuchin and White House economist Larry Kudlow “political cronies,” saying the three should be replaced in their roles in the response efforts by experts. The Trump administration “must stop releasing misleading, unscientific, and false information” about coronavirus, Sanders said.

Former New York Mayor Michael Bloomberg said at a rally in Houston that Trump was “burying his head in the sand” over coronavirus.

“His failure to prepare is crippling our ability to respond,” Bloomberg said.

Biden on Thursday announced a major fundraising haul, after a well-received appearance Wednesday night at the CNN town hall in South Carolina. The $1.2 million in donations, which Biden said on Twitter came from nearly 30,000 donors, came as a Monmouth University poll released on Thursday showed Biden with large support from black South Carolina voters, who make up about 60% of the Democratic electorate in the Southern state.

Biden, who has pinned his hopes on winning South Carolina to keep his candidacy alive after poor showings in Iowa and New Hampshire and a distant second place in Nevada, is backed by 36% of likely Democratic voters there, according to the survey, well ahead of Sanders, who has 16% support, and billionaire Tom Steyer with 15%.

Senator Elizabeth Warren of Massachusetts trails far behind with 8%, while former South Bend, Indiana, Mayor Pete Buttigieg and Senator Amy Klobuchar of Minnesota have 6% and 4%, respectively.

Among likely black voters, Biden has 45% support, compared with 17% for Steyer and 13% for Sanders, the poll showed.

Biden repeated his attacks on Sanders’ government-run Medicare for All plan, saying the senator’s proposal is too costly, would not help poor people, and is too politically toxic.

Speaking at a community health center in McClellanville, South Carolina, Biden said low-income people in the rural fishing hamlet “can’t afford to wait” five to 10 years for a Sanders plan to be implemented, if it passes Congress at all.

Shortly afterwards, at a rally in Winston-Salem, North Carolina, Sanders outlined the urgency of healthcare reform given that 87 million Americans are uninsured or underinsured.

“It is not a radical idea that when you get sick you should be able to go to the doctor no matter what your income is,” he said.

The dispute between Democratic moderates such as Biden and Buttigieg and progressives like Sanders was the backdrop to an incident before the senator’s rally. One supporter held up a sign depicting Buttigieg as a rodent with the words “rat bastard” scrawled on the candidate’s photograph.

“Rat” is a derogatory term often used by striking workers against corporations or non-union members.

Aides to Sanders, who has come under fire after some of his supporters unleashed aggressive verbal attacks on his rivals, acted quickly to get the sign taken down.

SUPER TUESDAY ON THEIR MINDS

Candidates are already looking beyond South Carolina to focus on Super Tuesday, which will shape the rest of the race because so many states hold primary elections and caucuses on the same day. Buttigieg announced a major get-out-the-vote effort in Super Tuesday states, including a California digital ad program and more than 350 mobilization events to reach voters across the state. 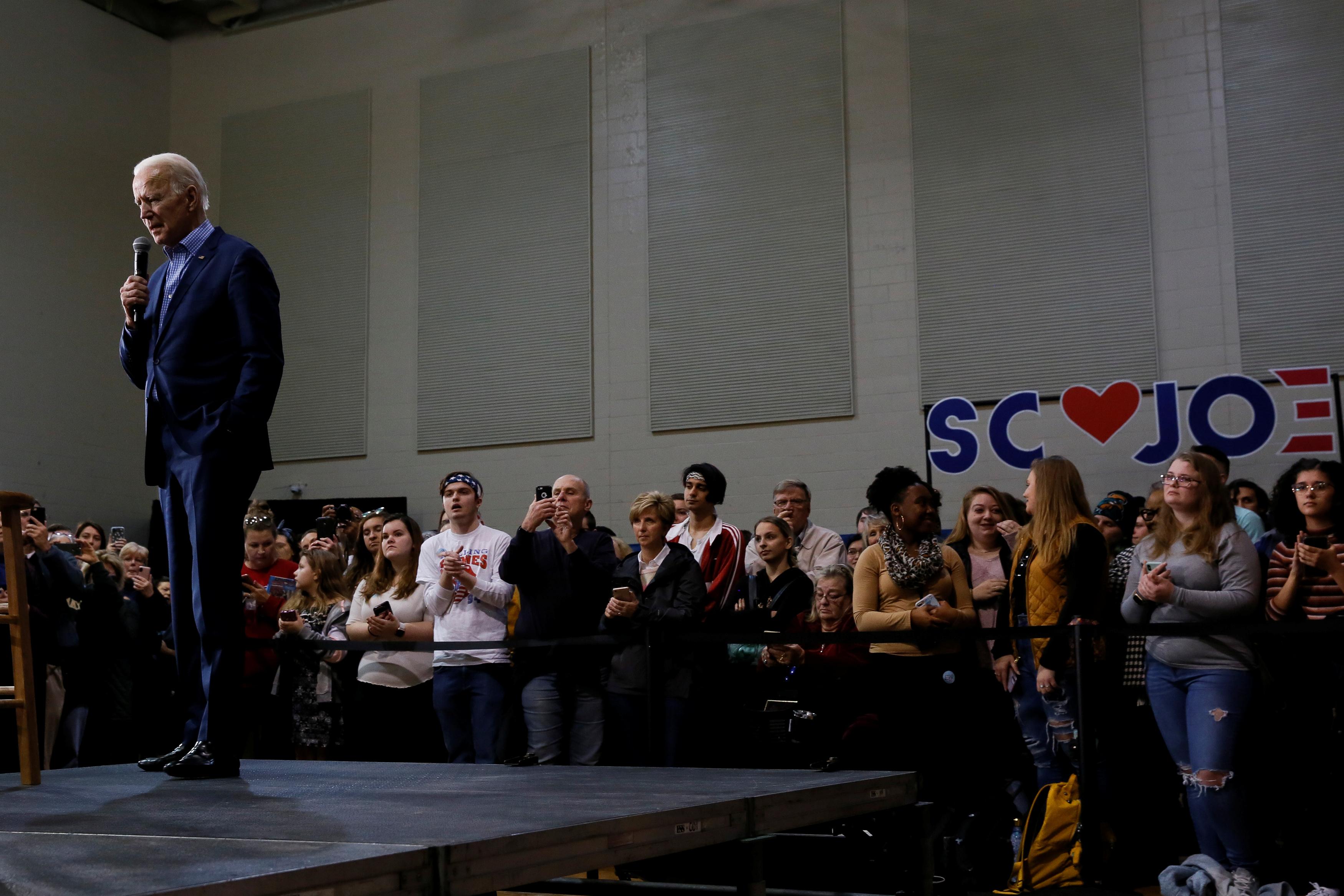 Bloomberg, who skipped the first three nominating states and is not running in South Carolina, was scheduled to hold three events in Super Tuesday states Texas, Oklahoma and Arkansas on Thursday.

Sanders was due to hold events in Virginia and North Carolina, two other March 3 states, in addition to events in South Carolina.

Warren will also be in Texas before returning to South Carolina on Friday, and Klobuchar has scheduled events through the weekend in Tennessee, North Carolina and Virginia.