Steve Double said bad memories of the 1970s “run very deep in our fishing communities” and asked for assurances that access to fishing waters will not be traded off “against other priorities”. Chancellor of the Duchy of Lancaster Michael Gove said control over the UK’s fishing waters was “something which we cannot barter away”. Mr Double said: “He (Mr Gove) will know that memories run very deep in our fishing communities and there is continued great concern because of the way the industry was treated previously.

“So will he make absolutely clear to the fishermen in Cornwall and around the country that access to our fishing waters will not be used as a bargaining chip to trade off against other priorities?”

Mr Gove replied: “Mr Double is absolutely right, memories of what happened in the 1970s certainly run deep and for very good reason and that is why I sought to stress in my remarks that we as an independent sovereign state regard control of our own resources as something which we cannot barter away.

“Of course we want to cooperate in the management of stocks with our neighbours but the approach that we will take will be similar to that of other sovereign states, or sovereign regimes like Norway, Iceland and the Faroes.

“And as an independent coastal state we will regulate access to our own waters on our terms.”

DUP MP Jim Shannon asked if fishing fleets and fish processors in Northern Ireland “will have the same rights as elsewhere” in Scotland, Wales and England. 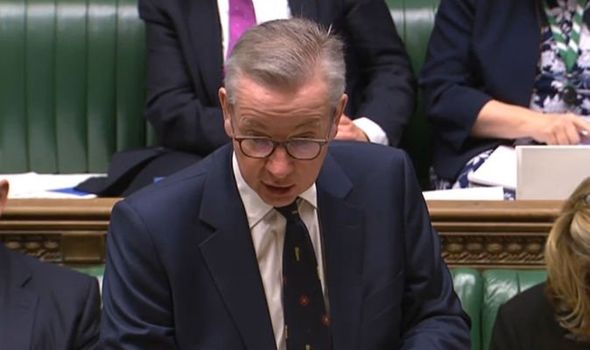 He asked Mr Gove to assure him that “Northern Ireland will not be disadvantaged by the border down the Irish Sea”.

Mr Gove replied: “There will be no border down the Irish Sea and the fishing fleets of Northern Ireland will enjoy all the rights that deserve, similar, indeed identical to other fisherman and fishers across the United Kingdom.”

Earlier in his statement on upcoming trade negotiations with the EU, Mr Gove said that the Government “will require a wholly separate agreement on fisheries”.

“We will take back control of our waters as an independent coastal state and we will not link access to our waters to access to EU markets.

“Our fishing waters are our sovereign resource and we want to determine other countries’ access to our resources on our terms,” he told MPs.