It was announced this morning the UK regulator, the Medicines and Healthcare products Regulatory Agency (MHRA), has approved the Pfizer/BioNTech vaccine. Roll out of the jab across the country will start next week.

The announcement gives Mr Johnson some positive news to boast about in the Commons.

With a realistic end of the pandemic in the UK now in sight, the vaccine helps the Prime Minister shrug off last night’s backbench rebellion over his coronavirus plan.

Mr Johnson saw just 291 MPs vote in favour of his new coronavirus tiers system for England which came into force today, with 55 Tory MPs voting against the system and a further 16 abstaining.

Mr Johnson accused his counterpart of having “no credible plan” and “no view on the way ahead”.

He described the move as “quite extraordinary”, adding: “Sir Keir Starmer, who said he’s always going to act in the national interest, has told his party to sit on its hands and to abstain.”

Sir Starmer’s decision has given Mr Johnson an easy line of attack, simply able to backhand any criticism from the Opposition by pointing out they had failed to take a stance on the coronavirus tier system.

The Prime Minister regularly mocks his opposite number for being “Captain Hindsight”, only offering an opinion on coronavirus once issues arise. 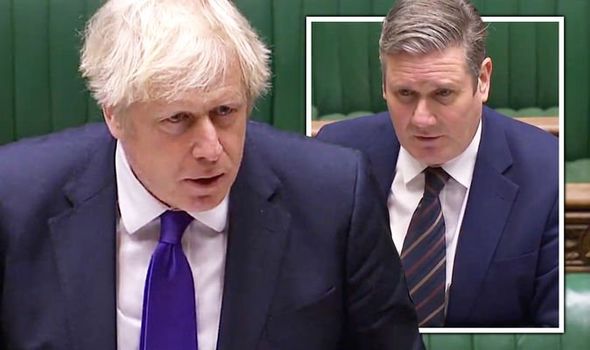 For nearly six hours yesterday MPs debated the measures, attacking the plan one after the other.

The Prime Minister wasn’t in the Commons for most of the speeches of his Tory party colleagues. Today, they will get the chance to directly express their anger to him.

11.38am update: Boris back in the Commons chamber

Today’s clash at the dispatch box between Boris Johnson and Sir Keir Starmer will be the first time PMQs attended by the Prime Minister in person in three weeks.

After coming into close contact with someone who tested positive for coronavirus, Mr Johnson was forced into self-isolation.

In a historic first for the Commons, for the last two weeks the Prime Minister took part in PMQs remotely, answering questions virtually from inside No10.