The UK-born rapper, who was detained by US immigration authorities, has lived in Atlanta since he was seven years old. 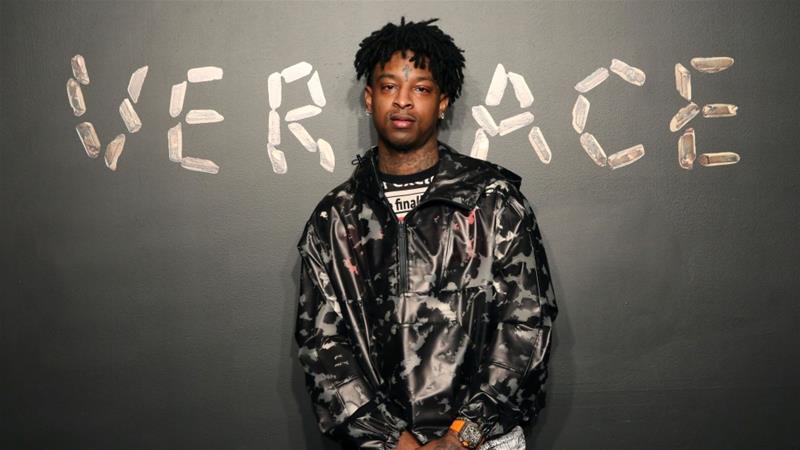 A lawyer for rap artist 21 Savage has said the entertainer was detained, in part, by US immigration officials because he is a celebrity who has been outspoken about family-separation security issues at the US-Mexico border.

The entertainer, whose real name is She’yaa BinAbraham-Joseph, was arrested on February 3 by US Immigration and Customs Enforcement (ICE) agents on charges he is a foreign citizen who had overstayed his visa by more than a decade.

Officials said he came to the US from the UK.

Atlanta US Immigration Judge Dan Pelletier granted the 26-year-old rapper a $100,000 bond during a hearing on Tuesday and the performer was released from an ICE detention centre in south Georgia on Wednesday.

ICE officials on Friday did not immediately respond to Reuters’s request for comment.

During a Friday appearance on ABC News programme “Good Morning America”, Abraham-Joseph said he arrived in the US when he was seven years old with his mother and brothers, and that his visa expired in 2006.

He told Linsey Davis of ABC News that he was arrested while driving in Atlanta.

“They didn’t – they didn’t say nothing. They just said, ‘We got Savage,'” Abraham-Joseph said. “It was definitely targeted.”

His arrest came days after he released the music video for his song “a lot”. Its lyrics touch on family separation issues at the US-Mexico border: “Been through some things, but I couldn’t imagine, my kids stuck at the border.”

Lawyer Alex Spiro, who appeared alongside Abraham-Joseph on Good Morning America on Friday, cited the rap artist’s music where he criticised ICE as being one reason he was detained.

“There’s a lot of things about this case that are curious and troubling,” Spiro said.

“He’s getting a visa, he’s operating in good faith, he’s performing, he’s giving back to his community, he’s a son, he’s a father and yet they take this step, this unusual step, to arrest him.”

Abraham-Joseph has a visa application pending before the US Citizenship and Immigration Services that was filed in 2017.

The rapper’s legal team said a deportation hearing for him was pending but that they were confident that he would be able to remain in the US.

Prominent progressive Democratic Representative Alexandria Ocasio-Cortez spoke out in support of the rapper on Twitter after his initial arrest.

In a series of tweets, Ocasio-Cortez shared Abraham-Joseph’s lyrics about children being detained at the border, and later criticised others for not speaking out against his detention.

Speaking on a Hot 97 radio programme, Ocasio-Cortez likened Abraham-Joseph’s detention to similar arrests of prominent political activists who speak out against ICE, suggesting that the rapper’s case was used to intimidate others.

“21 Savage didn’t have some incident, he wasn’t violent towards anybody, nothing like that happened,” she said.

Since coming to office, President Donald Trump has ramped up efforts to crackdown on undocumented immigrants, to prevent border crossing and to cut back on legal routes for immigrating to the US.