WASHINGTON — The fierce and pre-emptive Republican pushback against President-elect Joseph R. Biden Jr.’s choice of Neera Tanden this week to head the White House budget office underscored the difficulties the incoming administration will face in maneuvering its nominees through a polarized Senate.

In the 11 years since President-elect Joseph R. Biden Jr. served in the chamber, partisanship has intensified, and nominations — once an area dominated by courtesy, comity and a presumption of accommodation — have become just another brutal battlefield.

Republicans will not be eager to accede to Mr. Biden’s choices if they can find reason for opposition. And disparaging comments about Republicans on Twitter from Ms. Tanden, a longtime Democratic policy adviser and head of a liberal think tank, were enough for many Republicans to threaten the nomination well before it was made official on Tuesday.

“Trumpism has infected the entire Republican caucus,” said James P. Manley, a former longtime top Senate Democratic aide, who urged the incoming administration to brace for intense opposition from Republicans led by Senator Mitch McConnell of Kentucky. “I am not sure everyone has figured out yet what is going on here, but I hope they will soon, and prepare for what is coming.”

Should Democrats win two Senate seats in runoff elections to be held on Jan. 5 in Georgia, the party would control the agenda and make approval of Mr. Biden’s nominees much easier. But if Democrats fail, Republicans will have the power to decide the fate of Mr. Biden’s executive and judicial branch picks.

The reality of a Democratic White House and a Republican Senate will take some adjusting to on Capitol Hill after four years of Republicans working hand-in-hand with President Trump on nominations.

Republicans said they were stunned by the selection of Ms. Tanden, whom many knew mainly as a hostile social media presence, to head the Office of Management and Budget. Even though many Republicans have refused to recognize Mr. Biden as the winner of the election, they said they were surprised that his team had not checked in with them on how they might react to her nomination to an agency that lawmakers in both parties see as critical when it comes to advancing congressional priorities.

“That was just an unforced error,” Senator John Cornyn, Republican of Texas, said on Tuesday. He said that moving forward in future cases without weighing Republican sentiment was “a roll of the dice” that could cause unnecessary embarrassment to a nominee or to Mr. Biden’s White House.

Initially, Republicans — who had refused to hold hearings for President Barack Obama’s Supreme Court nominee in 2016 — suggested that they might not even take up Ms. Tanden’s nomination were it sent to the Senate. But Senator Rob Portman of Ohio, who is poised to be the top Republican on one of the two committees that would oversee hearings for Ms. Tanden, said he believed she should receive one even if he was skeptical about her chances of confirmation.

“That’s our responsibility,” said Mr. Portman, who oversaw the budget office under President George W. Bush. “But it doesn’t mean she’ll get the votes.”

The handling of the announcement of Ms. Tanden’s nomination left some in both parties wondering whether Mr. Biden’s team was misreading the environment on Capitol Hill, where voting against an administration’s nominees has become essentially the default position for senators in the party out of power in recent years.

But people close to the transition team said opposition to Ms. Tanden’s nomination from some Republicans was no surprise to the president-elect or his team, nor was it evidence that Mr. Biden, who served almost four decades in the Senate, was naïve about what it would take to win confirmation of his choices. One person familiar with the deliberations said they expected as much from Republicans already angling to run for president in four years.

Advisers said Mr. Biden was cleareyed about the need to use some of his political capital to fight for Ms. Tanden’s nomination, citing her years of policymaking experience and a compelling personal story as reasons to fight to get her confirmed.

They noted that the reaction from Republicans to Mr. Biden’s other nominees has been more muted, with some Republicans suggesting they would be willing to give the president-elect deference in terms of who he wants in his cabinet. One person close to the nomination process said that Mr. Biden and his team had, in fact, been reaching out to Republican lawmakers in recent weeks.

“The country is facing multiple crises, from a pandemic that is killing over 10,000 Americans a week to a recession that is continuing to push thousands out of the work force,” said Andrew Bates, a transition spokesman. “The American people cannot afford partisan obstruction of qualified and experienced women who are nominees.” 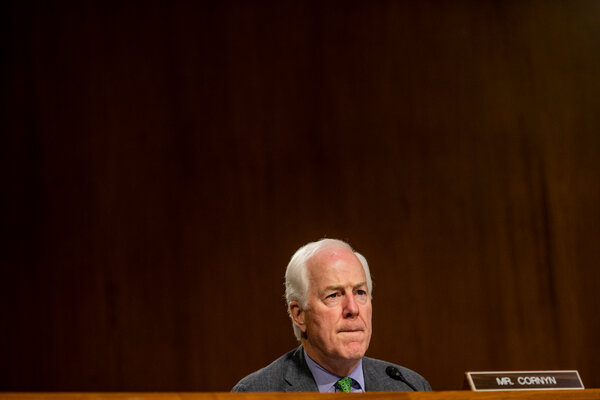 Democrats scoffed at the criticisms surrounding Ms. Tanden’s selection, particularly over her Twitter feed — given that most Senate Republicans have diligently spent four years evading queries about the array of policy announcements, racist commentary and inflammatory attacks on their own colleagues from Mr. Trump on Twitter.

“After spending four years pretending that they didn’t see the latest insane tweet from President Trump, Senate Republicans seem to have found a newfound interest in the Twitter feeds of President-elect Biden’s cabinet selection,” Senator Chuck Schumer of New York, the Democratic leader, said on the Senate floor. “A few critical tweets about substantive policy positions have caused Senate Republicans to label Ms. Tanden’s nomination ‘radioactive.’ Spare us the hyperbole.”

Senator Tim Kaine, Democrat of Virginia, said he believed that Mr. Biden and his team should reach out to Capitol Hill about the looming nominations. He added that he had been in touch with some of the intended nominees about scheduling private, one-on-one meetings. (On Tuesday, Mr. Schumer’s office circulated photographs of him in a video conference with Mr. Biden’s choices for secretary of state, Antony J. Blinken, and director of national intelligence, Avril D. Haines.)

“That’s probably the most important first thing because there’s nothing like making your case for yourself,” Mr. Kaine said. “Four years ago, President Trump put some nominees up — if they said things in tweets or whatever that we didn’t like, we’d ask them tough questions about that, so she will expect the same.”

Democrats also said they were astounded by calls from Republicans for extensive disclosures of business dealings from Mr. Biden’s potential picks after the record compiled by Mr. Trump.

“This is just stunning, even by the double standards of Washington,” said Senator Ron Wyden, Democrat of Oregon, who labeled the Trump administration “the Babe Ruth of darkness.”

“The Trump administration has stonewalled on so many things — starting with the president’s taxes — and then they come in and the first thing they’re doing is saying, ‘Oh, my goodness, there’s no transparency in the Biden administration,’” he added.

Mr. Manley, the former Senate aide, urged Democrats to stand behind the new administration’s nominees or face an onslaught of obstruction from emboldened Republicans.

“If Republicans have objections to her policy views, they should give her a hearing and grill her,” he said. “But the idea that they are prepared to block her nomination because she was mean to them on Twitter is ridiculous, and no Democrat should fall for it.”