WASHINGTON — Republican divisions deepened on Monday over an insurgency in the party’s ranks seeking to overturn President-elect Joseph R. Biden Jr.’s victory, as lawmakers weighed their fear of alienating President Trump and his supporters against the consequences of a precedent-setting vote to reject a democratic election.

With a Wednesday vote looming on whether to certify the election results, the last-ditch bid to deny Mr. Biden the presidency has unleashed open warfare among Republicans, leaving them scrambling to stake out a defensible stance on a test that carried heavy repercussions for their careers and their party. On Monday, as Mr. Trump ratcheted up his demands for Republicans to try to block Mr. Biden’s election, elder statesmen of the party and some rank-and-file lawmakers rushed to provide political cover for those disinclined to go along.

In the House, seven Republicans, some of whom are part of the conservative Freedom Caucus that normally aligns with Mr. Trump, released a statement arguing at length against the effort.

“The text of the Constitution is clear,” the lawmakers, led by Representative Chip Roy of Texas, wrote. “States select electors. Congress does not. Accordingly, our path forward is also clear. We must respect the states’ authority here.”

Chief executives and other leaders from many of America’s largest businesses also weighed in, urging Congress to certify the electoral vote.

“Attempts to thwart or delay this process run counter to the essential tenets of our democracy,” they said in a statement signed by 170 people, including Laurence D. Fink of BlackRock, Logan Green and John Zimmer of Lyft, Brad Smith of Microsoft, Albert Bourla of Pfizer and James Zelter of Apollo Global Management.

And John C. Danforth, a former Republican senator and paragon of the party establishment, denounced the electoral challenge, calling it part of a “populist strategy to drive America even farther apart by promoting conspiracy theories and stoking grievances.”

“Lending credence to Trump’s false claim that the election was stolen is a highly destructive attack on our constitutional government,” Mr. Danforth, a mentor to Senator Josh Hawley of Missouri, the instigator of the effort in the Senate, said in a statement. “It is the opposite of conservative; it is radical.”

Yet the effort won a high-profile convert on Monday, when Senator Kelly Loeffler of Georgia announced just hours before Mr. Trump was to appear at a rally on her behalf that she, too, would vote against certifying the election results.

Complicating the calculation for fretful Republicans were fresh revelations about Mr. Trump’s own efforts to subvert the election results by pressuring Georgia’s Republican secretary of state to “find” him enough votes to overturn Mr. Biden’s win. Proponents of the electoral challenge, who have sought to portray their position as principled and apolitical, conceded on Monday that leaked audio of the call has made their task more difficult.

Mr. Trump used his Twitter bully pulpit on Monday to hammer at Republicans who declined to back the doomed effort, labeling them the “Surrender Caucus” and singling out Senator Tom Cotton of Arkansas.

“How can you certify an election when the numbers being certified are verifiably WRONG,” Mr. Trump wrote, repeating a false claim. “Republicans have pluses & minuses, but one thing is sure, THEY NEVER FORGET!”

The gambit is all but guaranteed to prolong what is typically a brief and routine recap of each state’s electoral votes, set to begin at 1 p.m. on Wednesday, prompting a bitter, hourslong debate that will culminate in a vote — or perhaps several — on whether to certify Mr. Biden’s election. Democratic leaders, on a private caucus call Monday, counseled lawmakers to avoid focusing on Mr. Trump during the discussion and instead highlight the lack of evidence of fraud.

“I don’t think we need to go all night,” said Representative Steny H. Hoyer of Maryland, the majority leader. “We have members from each state who are ready to discuss, you know, the status of their state, what happened and what the courts said.”

Still, more Republicans announced on Monday that they would back the objections to certifying the results. Representative Elise Stefanik of New York, a rising star in the party who led Republican efforts to recruit women to Congress over the past two years, said she owed it to voters who believe the election was rigged to support the challenge.

“To the tens of thousands of constituents and patriots across the country who have reached out to me in the past few weeks — please know that I hear you,” Ms. Stefanik said in a statement.

Senator Mitch McConnell of Kentucky, the majority leader, and his deputies have made clear to colleagues that they strongly oppose the effort to reverse the election results, but Mr. Hawley has said he will force a vote and at least 12 other Republican senators plan to back him. The party fissures have extended to the House, where the top Republican, Representative Kevin McCarthy of California, has not revealed how he plans to vote on Jan. 6 but has said he is supportive of those who want to have a debate, while Representative Liz Cheney of Wyoming, the No. 3 Republican, has argued vociferously against the move.

That has created something of a free-for-all in the House. Lawmakers have been left to weigh on their own whether to vote to protect the sanctity of the election and risk incurring the wrath of their constituents, or move to overturn the results in a doomed loyalty test that could badly damage their party.

Representative Thomas Massie, Republican of Kentucky, said in an interview that he and the other conservatives who came out on Monday against the challenge were hoping to put forward a “constitutionally grounded” argument from a “pro-Trump perspective” that their colleagues could adopt.

“I think there are a lot of people of the same mind as us, but they were looking for some kind of grounding or maybe some kind of cover,” Mr. Massie said. “I feel like there are people getting sucked into the other vortex as the hours go by.”

Other Republicans, including some of the president’s most ardent defenders, were plainly uneasy about the coming vote, prompting a series of tortured statements seeking to justify the most basic of democratic positions: a vote to respect the outcome of an election.

“The easiest vote for me politically would be to object to everything and vote for every objection,” Senator Kevin Cramer, Republican of North Dakota, said on Sunday. On Monday, Mr. Cramer issued a statement saying he would not object, adding “objecting to the Electoral College votes is not an appropriate or effective way to change the results.”

Senator Rob Portman, an Ohio Republican who is up for re-election in 2022, said in a lengthy statement that he voted for Mr. Trump but could not object to certifying the election results, citing his opposition to a similar, Democratic-led effort in 2005.

“I stood in opposition to Democrats then, saying Congress should not ‘obstruct the will of the American people,’” Mr. Portman said. “I was concerned then that Democrats were establishing a dangerous precedent where Congress would inappropriately assert itself to try to reverse the will of the voters. I cannot now support Republicans doing the same thing.” 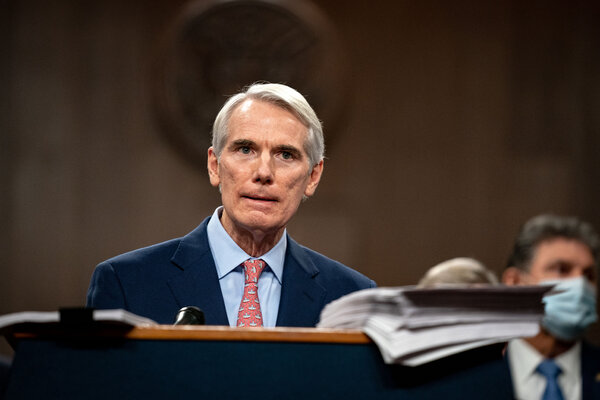 By Monday afternoon, Mr. McConnell had dialed dozens of senators to try to map out the process on Wednesday, but remained in the dark about how many would lodge objections and to which states, according to people familiar with the discussions.

Even the 11 senators who signed onto the effort, led by Senator Ted Cruz of Texas, were debating how far to push their objections, according to a person familiar with their discussions. Some of them were unsure of how to defend their position in interviews, the person said, and were looking to Mr. Cruz to serve as the spokesman for the group.

“None of us want to vote against electors, but we all want to get the facts out there,” said Senator James Lankford of Oklahoma, one of the 11 who signed onto a statement over the weekend pledging to oppose certifying Mr. Biden’s win unless an independent commission was formed to audit the election results. “There are lots of folks in my state that still want those answers to come out, and so at least one of the electors I would vote against at that point, once we get to that moment. And it’s a statement to be able to say, ‘We got to get this done.’”

He repeatedly declined to say which state’s electors he would object to on Wednesday, even as he conceded that the establishment of a commission was “highly unlikely.”

As the vote approached, some Republicans said they were alarmed at a process that appeared to be spiraling out of control. Mr. Massie said he was frustrated with conservative groups that have promoted the effort to reject the election results — including exhorting followers to travel to Washington for a “Stop the Steal” rally near the Capitol on Wednesday — and called some of the messaging “disingenuous.”

“They are not telling the base, some of whom are getting on buses and coming to D.C. right now, that it’s mathematically impossible to overturn the election,” he said. “I have great respect for my colleagues on the other side of this debate and I see where they’re coming from, but the people who are agitating for constituents to come here are also concealing from them that there is no way to win.”

Opponents of the electoral challenge were hopeful that Mr. Trump’s call with Brad Raffensperger, Georgia’s secretary of state, would turn away lawmakers who had been mulling joining the bid.

Even senators who supported it conceded that the recording had hurt their cause.

“One of the things, I think, that everyone has said,” Senator Marsha Blackburn, Republican of Tennessee, said on “Fox & Friends,” “is that this call was not a helpful call.”