The Florida governor has played his hand carefully as he weighs a 2024 bid, rarely crossing Donald Trump overtly. But the former president’s legal troubles could force him to take a side.

This article is part of our Midterms 2022 Daily Briefing 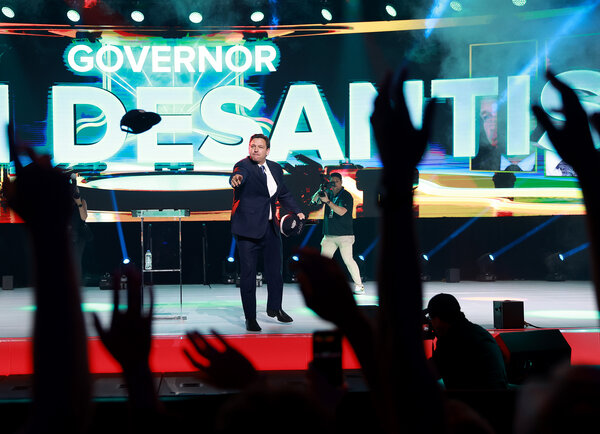 Republican politicians weighing how to react to the F.B.I.’s search of Mar-a-Lago last week had several options. Boiled down, they were:

1. Immediately denounce it as a “witch hunt” and threaten to investigate or even defund the bureau, while calling for Attorney General Merrick Garland’s impeachment.

2. Issue a cautious, place-holder statement expressing confidence in the process while sounding a note of concern about the potential for Justice Department overreach. Say little that could become embarrassing should more facts emerge that portray the former president’s conduct in a negative light.

3. Criticize Trump as having jeopardized the national security of the United States. Call on him to release the search warrant and explain what agents might have been looking for, and why he had not returned the documents they were seeking.

4. Await more information before commenting at all.

To defend or not to defend?

The political dilemma was particularly acute for Republicans who aspire to run for president in 2024 — requiring a high-wire act worthy of the Flying Wallendas.

Enter Ron DeSantis, the governor of Florida, who is widely viewed as Trump’s most serious potential rival in a Republican primary race. The political world watches DeSantis’s every move nowadays, and many awaited his reaction to the search with bated breath.

In a clever but dishonest bit of online skulduggery, someone spliced together two separate videos to make it seem as if DeSantis had defended the F.B.I. The manipulated video, which circulated widely on social media, purports to show DeSantis tangling with Sean Hannity over the Fox News host’s use of the word “raid” to describe the F.B.I.’s actions.

“It’s not a raid,” DeSantis says in the edited video, adding, “they were serving valid process in accordance with the laws and Constitution of the United States.”

It would have been an explosive moment — the first real fireworks of the shadow 2024 presidential primary.

But it never happened.

In reality, DeSantis had been defending a 2020 search by law enforcement officers of the home of Rebekah Jones, a former data specialist for the state of Florida who had claimed that the DeSantis administration was manipulating information about the coronavirus pandemic.

Hannity, for one, called the video “FAKE NEWS” and demanded that Twitter remove it.

“The raid of MAL is another escalation in the weaponization of federal agencies against the Regime’s political opponents, while people like Hunter Biden get treated with kid gloves,” DeSantis wrote. “Now the Regime is getting another 87k IRS agents to wield against its adversaries? Banana Republic.”

Note what was missing here: any defense of Trump’s conduct. DeSantis made similar remarks at a rally on Sunday for Kari Lake and Blake Masters, the Republican nominees for governor and Senate in Arizona — criticizing the Justice Department and raising examples of what he characterized as F.B.I. misconduct, while remaining silent on the former president’s alleged mishandling of classified documents.

David Jolly, a former Republican member of Congress from Florida, said the “dance” between DeSantis and Trump was quietly consuming both camps behind the scenes.

Trump has periodically noted — accurately — that he remains the most popular Republican in hypothetical 2024 primary matchups, with DeSantis a distant second. But the two have yet to spar in earnest.