The non-affiliated peer accused the Northern Ireland Protocol of disrupting trade from Britain. As part of Boris Johnson’s Brexit withdrawal agreement, customs checks are required on good travelling across the Irish Sea.

The requirement was demanded by the EU in order to avoid a hard border on the island of Ireland, which it warned would undermine the Good Friday Agreement.

Violent protests have broken out in Northern Ireland from unionists following the impact of the Protocol, with accusations the UK single market has been undermined by the introduction of customs checks.

Launching a furious attack on the conduct of Ireland during Brexit negotiations, Baroness Hoey accused the then-Taoiseach Leo Varadkar of using the threat of the return of IRA terrorism to force the Protocol’s implementation.

She said: “There are already serious societal difficulties in Northern Ireland. 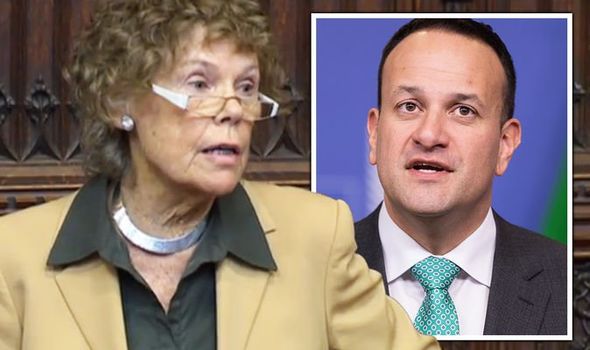 “Every night now across the province there are dozens of mostly peaceful protests with many feeling ignored and betrayed.

“They’re not reported of course because they are not violent.

“This direct action is going to increase over the next few months with the worry in many communities there is a feeling that the only way to advance political objectives is with the threat of violence, just like the threat of IRA bombs was unfortunately used by Taoiseach Varadkar as political leverage which led to the Protocol.”

A visible gasp could be heard in the Chamber as peers reacted with shock to her allegations.

“Shame on you,” shouted one Lord.

Asking a question to Lord David Frost, she urged the Brexit minister to “assure the people in Northern Ireland that Her Majesty’s Government does recognise that the serious societal difficulties and instability arising from the Protocol already exist and it is, therefore, unsustainable for the Protocol to last much longer”. 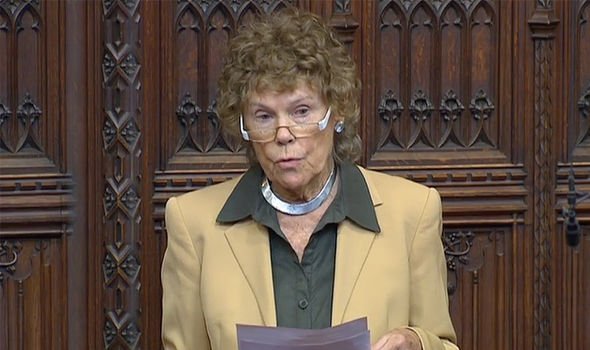 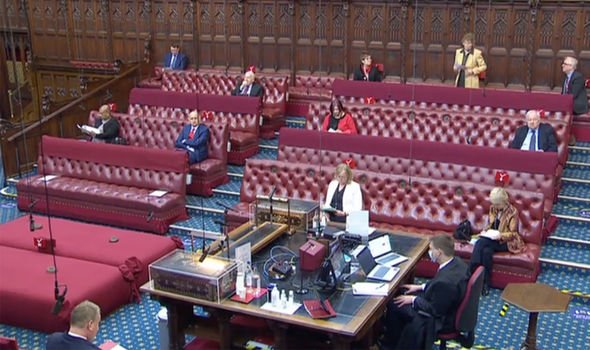 Responding Lord Frost admitted there were continued concerns over the impact of the Northern Ireland Protocol.

He added discussions were ongoing with his EU counterpart, Maroš Šefčovič, to find a solution.

Lord Frost said: “In all my interactions with vice-presidency Šefčovič I do drive home the seriousness of the current situation in Northern Ireland and the overriding importance for all parties of supporting the peace process and protecting the Belfast Good Friday Agreement.

DON’T MISS:
Rejoiners vowed to reverse Brexit: ‘War can still be won’ [UPDATE]
Rishi Sunak gearing up for bonfire of EU rules [INSIGHT]
Boris hits back at EU after threats to trigger penalties against UK [REACTION] 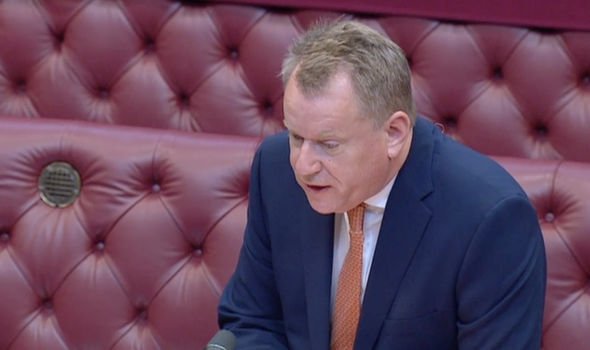 “The solution to this problem is one in which we can work with the Commission to operate the Protocol in a pragmatic and a proportionate fashion.”

He added he had encouraged Mr Šefčovič to speak to businesses in Northern Ireland so he could hear for himself their “unfiltered views” about the Protocol.

Last month the UK sparked anger in the EU when it unilaterally extended the grace period on the introduction of some customs checks.

Paperwork originally due to be required from April 1 will now not be implemented until September.

The UK said the delay was “temporary and necessary” to avoid disruption to the flow of goods.

The European Commission is taking legal action against Britain for the move, frustrated at the decision being taken without their consultation.

At the same time as the EU’s decision to take the UK to court over failing to fully implement the Protocol, unionists ahem started legal action of their own.

They claim the Protocol is illegal under the Good Friday Agreement and must be abolished.