WASHINGTON — There is, traditionally, a predictable rhythm to the start of a “much-awaited hearing” on Capitol Hill.

There are protesters and counterprotesters, enhanced police and news media presences, insufferable opening statements and an overall sense that something more momentous than usual might be going on.

The start of the Senate Judiciary Committee’s hearings for Judge Amy Coney Barrett on Monday had all of that. But like everything else in Washington these days, this was an entirely different kind of pinstripe rodeo.

Start with the hazmat suits.

“We are making a point,” said Jennie Spector, one of a few dozen demonstrators dressed in white hazmat suits convened outside the Hart Senate Office Building.

It was insane to be holding these hearings, Ms. Spector said. After all, two Republicans on the committee had recently tested positive for the coronavirus. And the committee chairman, Senator Lindsey Graham, the South Carolina Republican who was among those at the White House “super spreader” event last month, had refused to get tested in recent days. 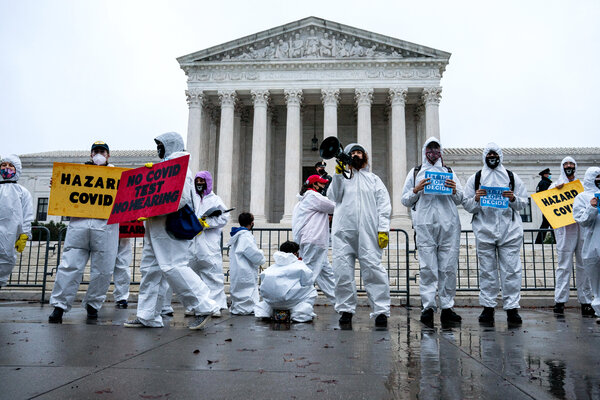 But there they all were. Showtime in a potential petri dish.

For the record, Ms. Spector said she purchased her hazmat suit at Walgreens. Apparently you can buy hazmat suits at Walgreens these days. How 2020 is that? The white jumpsuits doubled as decent rain gear in the morning drizzle.

Inside, everyone seemed to be remarking upon the senators’ varying degrees of public health diligence or recklessness. Viral vulnerability and co-morbidities were assessed. Senators Dianne Feinstein and Charles E. Grassley are 87!

As a general rule, U.S. Capitol Police officers have been diligent in their enforcement of mask requirements, with blatant exceptions. Senator Mike Lee, Republican of Utah, who attended the super spreader event — the Rose Garden announcement of President Trump’s nomination of Judge Barrett to the Supreme Court — and tested positive soon after, delivered his opening statement sans mask. He had previously assured everyone that he had been “cleared” by his doctor.

Senator Ted Cruz, Republican of Texas, appeared remotely as he was self-quarantined after coming in contact with an infected party (Mr. Lee). Hand sanitizer, disinfecting machines and wipe dispensers are the new candy bowls in Senate offices.

Other novelties were more subtle, but telling. Upon gaveling the proceedings to order, Mr. Graham opened what he called “the hearing to confirm Judge Amy Coney Barrett to the Supreme Court,” a choice of words that pretty much gave away the game at the outset. Usually, the parliamentary term of art is for the chairman to commence a hearing to “consider the nomination” of so and so, not merely rubber stamp, or “confirm,” the nominee.

In other words, this would not be a deliberation as much as a media spectacle convened amid particles that may or may not be lethal.

“This is probably not about persuading each other unless something really dramatic happens,” Mr. Graham said. “All the Republicans will vote yes. All the Democrats will vote no.”

It raised an obvious question: Why were we even here?

There was a certain low energy to the whole tableau. Numbers of both pro- and anti-Barrett demonstrators were less than what you’d expect on Opening Day of a big Senate proceeding. It was a holiday. It was raining. It was Monday. Chants were muffled by germ masks.

People seemed to be going through the motions. They seemed tired.

The hearings droned on through a procession of opening statements from the senators — 22 — before Judge Barrett even uttered a word. Fun!

Mr. Graham was an obvious person of interest. In addition to his role as chairman and ubiquity in Mr. Trump’s orbit, he faces a possible reckoning at the polls next month in a tight re-election campaign.

He also has a habit of spectacular about-faces — all caught on video — on everything from his previous ill feelings toward Mr. Trump to whether Senate Republicans should have the right to fill a Supreme Court vacancy shortly before a presidential election. No way, he declared in 2018. “You can use words against me,” he thundered at the time, and of course, no one had been waiting for his permission.

“This hearing should have been postponed,” said Ms. Harris, who appeared remotely. “The decision to hold this hearing now is reckless and places facilities workers, janitorial staff and congressional aides and Capitol Police at risk.”

The Senate began four days of what are likely to be contentious Supreme Court confirmation hearings for Judge Amy Coney Barrett.

“This is probably not about persuading each other. Unless something really dramatic happens, all Republicans will vote ‘yes’ and all Democrats will vote ‘no.’” “Do you solemnly swear that the testimony you’re about to give this committee is the truth, the whole truth and nothing but the truth, so help you God?” “I do.” “Voting is underway in 40 states. Senate Republicans are pressing forward, full speed ahead, to consolidate a court that will carry their policies forward with, I hope, some review for the will of the American people.” “Democrats and their leftist allies have also shown that there is no low that they won’t stoop to in their crusade to tarnish a nominee. And I saw it all as chairman of this committee when Kavanaugh came up.” “With one stroke of a pen, one judge can decide if millions of Americans, including their family, would lose their insurance. One judge can decide if millions of Americans can lose their right to keep their kids on their insurance till they’re 26 years old. One judge can decide that if seniors’ prescription drugs, which already are too high, could soar even higher.” “Senator Klobuchar said a number of things about Covid that I agree with. She cited a bunch of really painful stories in Minnesota, and similar stories could be told from across the country. I even agree with parts of her criticism of the mismanagement of Covid by Washington D.C. I don’t know what any of that has to do with what we’re here to do today. Huge parts of what we’re doing in this hearing would be really confusing to eighth graders, if civics classes across the country tuned into this hearing and tried to figure out what we’re here to do.” “I’m not special or unique. Serious illness can hit anyone unexpectedly. It did for me. And when it does, no one should have to worry about whether they can afford care that might save their life.” “Your participation — let me be very blunt — in any case involving Donald Trump’s election would immediately do explosive, enduring harm to the court’s legitimacy and to your own credibility. You must recuse yourself. The American people are afraid, and they’re angry.” “But what your political opponents want to paint you as is a TV or cartoon version of a religious radical, a so-called handmaid, that feeds into all of the ridiculous stereotypes they have set out to lambaste people of faith in America. And that’s wrong.” “Senate Republicans have made it crystal clear that rushing a Supreme Court nomination is more important than helping and supporting the American people, who are suffering from a deadly pandemic and a devastating economic crisis. Their priorities are not the American people’s priorities.” “I look forward to answering the committee’s questions over the coming days. I try to remain mindful that while my court decides thousands of cases a year, each case is the most important one to the litigants involved. After all, cases are not like statutes which are often named for their authors. Cases are named for the parties who stand to gain or lose in the real world, often through their liberty or livelihood. When I write an opinion resolving a case, I read every word from the perspective of the losing party. I have been nominated to fill Justice Ginsburg’s seat, but no one will ever take her place. I will be forever grateful for the path she marked and the life she led.” 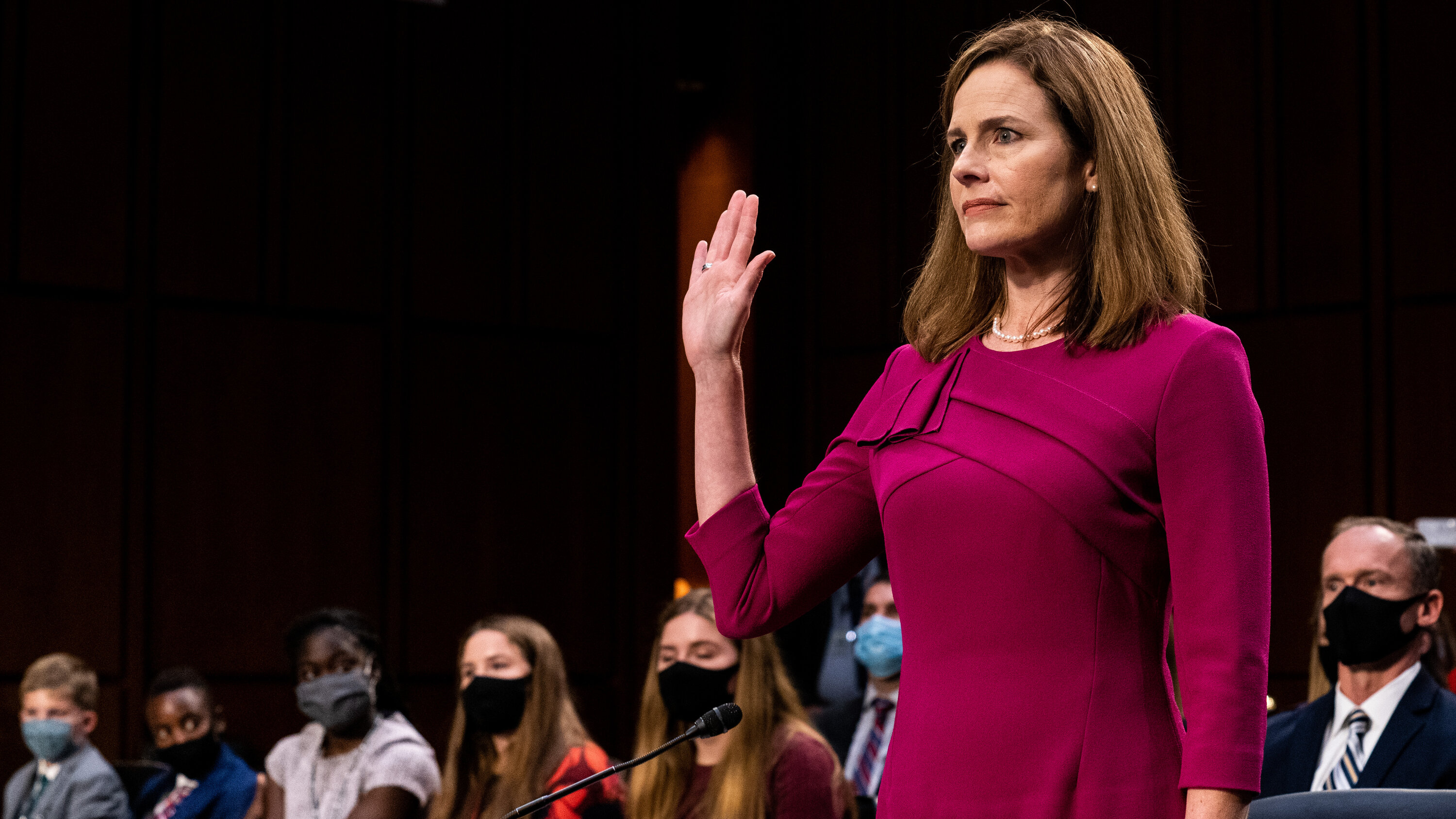 Senator John Kennedy of Louisiana was a rare Republican senator to subject himself to news media questions outside the hearing room. “This is a solemn occasion,” Mr. Kennedy said softly before launching into what has become a key part of the Republican message, bemoaning all of the terrible attacks Ms. Barrett was being forced to endure from Democrats over her Christian faith. “Some of my colleagues tried to attack her on her religion,” Mr. Kennedy said.

“Wait, who did that?” one reporter asked. For the record, no one on the committee had.

“I’m not going to argue with you guys,” Mr. Kennedy said.

It was a simple question: Could he name a colleague who attacked Judge Barrett over her religion?

“I don’t want to go there,” Mr. Kennedy demurred. “I understand the point of your question. It’s to try to get me to attack one of my colleagues.”

“Y’all get outside,” he urged reporters as he headed back into the hearing room. “Get a little sun.” Folksy!

Senator Richard J. Durbin, Democrat of Illinois, replaced Mr. Kennedy at the standing microphone in front of reporters and immediately pounded on the Democrats’ key theme of the day: Putting Judge Barrett on the Supreme Court would hasten the demise of the Affordable Care Act.

Mr. Durbin then pivoted to some Senate math. Keep in mind, Mr. Durbin said, that two Republican senators did not support holding the hearing now. Presumably he was referring to Senators Susan Collins of Maine and Lisa Murkowski of Alaska, both of whom said the Supreme Court vacancy should not be filled until after the next president is selected.

If two more Republican senators could not support Judge Barrett, the Republicans would not have the votes to confirm, and would be forced to put off the vote until after the election. “Which is what we think the right thing to do is,” Mr. Durbin said.

It was not immediately clear whether Mr. Durbin was suggesting that those elusive two Republican votes might be persuaded not to support Judge Barrett on the merits, or simply might not be able to participate in a vote or quorum for some reason. Illness, perhaps.

This is one of those morbid speculation scenarios that seems to be getting tossed out a lot these days on Capitol Hill.

“I’m not talking about gaming Covid-19,” Mr. Durbin said when a reporter asked if that in fact was what he was suggesting. “Not at all,” he reiterated.

That settled, Mr. Durbin re-entered the hearing room, and Mark Meadows, the White House chief of staff, parked himself nearby in front of another cluster of reporters. As Mr. Meadows began to remove his mask to speak, CNN’s Kristin Wilson asked if he could please keep it on. Mr. Meadows had been in close contact with dozens of infected parties over the past two weeks, including Mr. Trump.

“I’m not going to talk through a mask,” Mr. Meadows, and that was that. He headed off. It was yet another discussion in these dark Washington days that was over before it began.