On a recent Sunday evening, about a dozen liberal housing activists from New York gathered for a virtual meeting with Senator Chuck Schumer. Though the newly anointed majority leader had served in Congress for four decades, a number of participants had scarcely interacted with him before, and some regarded him as an uncertain ally.

But Mr. Schumer was eager to offer reassurance. At one point, he described himself as a former tenant organizer who was now in a position to deliver on housing issues on a grand scale, several participants recalled.

“He had done a bunch of homework and knew everything that we were going to ask about and made a bunch of commitments with us to make it happen,” said Cea Weaver, a strategist for New York’s Housing Justice for All coalition. “He was like: I’m talking to Ilhan Omar, I’m talking to Bernie Sanders, I’m talking to A.O.C.”

The January meeting was one in a series of steps Mr. Schumer has taken to win over leaders of the left in New York and Washington ahead of his campaign for re-election in 2022. Armed with a sweeping set of policy promises, he is courting the activists, organizers and next-generation elected officials in New York who would likely make up the backbone of an effort to dethrone him, should one ever arise.

He is facing an extraordinary balancing act in the coming days as he seeks simultaneously to forge a massive relief bill to counter the coronavirus pandemic while managing the impeachment of former President Donald J. Trump. Both tasks are seen as urgent practical and moral imperatives by the Democratic Party’s electoral base.

Mr. Schumer, 70, has been attempting to channel his party’s sense of impatient purpose: In recent days, he has publicly urged President Biden to “go big and bold” with his economic policies and executive actions, defying pressure from Republicans and a few centrist Democrats to pare back campaign promises.

Over the last week, Mr. Schumer has backed a new push to decriminalize cannabis; signed on to Senator Cory Booker’s Baby Bonds proposal, a plan to address the racial wealth gap; and appeared with Senator Elizabeth Warren and other progressives to call on Mr. Biden to cancel student debt.

On impeachment, too, Mr. Schumer has taken an into-the-breach approach, demanding Mr. Trump’s removal from office the morning after the Jan. 6 attack on the Capitol and casting the upcoming trial as a crucial ritual of accountability even if it is highly improbable that two thirds of the Senate will vote for conviction.

Maurice Mitchell, the national director of the Working Families Party, said Mr. Schumer was emphatic in private conversations that he intends to “get really big things done” despite the daunting Senate math. Mr. Mitchell said he spoke frequently with Mr. Schumer but had not yet discussed the 2022 campaign with him.

“He’s going to have to use all the tools at his disposal to keep his caucus together; he gets that, we all get that, it’s not a surprise,” Mr. Mitchell said. “I think he’s also really clear that the alternative is unacceptable — that he absolutely has to deliver.” 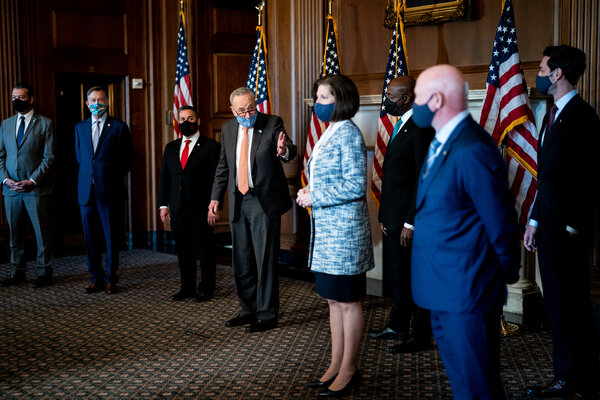 The new Senate leader appears to recognize that his political playbook requires updating. A compulsive retail politician and prodigious fund-raiser, Mr. Schumer climbed to power less as a legislative engineer and an author of big ideas than as a campaign tactician with a financial base on Wall Street and a keen eye for finding the political midpoint between liberal New York City and its historically conservative suburbs.

“Any politician that’s part of the old guard has to be very concerned about a potential primary,” said Mr. Carlucci.

Unlike Mr. Crowley and Mr. Engel, the Senate leader remains a ubiquitous presence around New York. But his ability to match the passions of his own party is another question.

Mr. Schumer drew periodic complaints from the left throughout the Trump years for taking a generally cautious approach to messaging and campaign strategy, including in key Senate races last year where Mr. Schumer handpicked moderate recruits who eventually lost in states like Maine and North Carolina. There is limited patience now among Democrats for the kind of incremental maneuvering and horse-trading that is traditionally required to pass laws in the Senate.

In a statement, Mr. Schumer said he was trying to “do the best job for my constituents and for my country” and acknowledged a shift in the scope of his governing goals.

“The world has changed and the needs of families have changed,” he said, “income and racial inequality has worsened, the climate crisis has become more urgent, Trump has attacked our democracy — all of these things require big, bold action and that is what I am fighting to deliver in the Senate.”

At the moment, the most serious potential challengers to Mr. Schumer — Representative Alexandria Ocasio-Cortez chief among them — have not taken steps toward a campaign. Ms. Ocasio-Cortez, the 31-year-old Queens lawmaker, has told associates that she has not decided whether to run but that she believes the possibility of a challenge serves as a constructive form of pressure on Mr. Schumer, people who have spoken with her said.

Yet Mr. Schumer seems to want to deter even a quixotic opponent who could become a nettlesome distraction or worse. He has taken to using Twitter and cable-news interviews to demand that Mr. Biden take bold executive actions on matters like student debt and climate change.

And as he assumes the expanded powers of the Senate majority, Mr. Schumer is drawing on old and new alliances to help him govern.

Mr. Schumer’s regular meetings with national liberal advocacy groups have intensified in recent weeks, and he has been spending time with a cohort of New York progressives elected over the last year. In December, he met with State Senator Jabari Brisport, a 33-year-old democratic socialist elected last fall, at a bar in Bedford-Stuyvesant, and stressed his support for addressing climate change.

“We joked about me being a socialist in Brooklyn,” Mr. Brisport said, recalling that Mr. Schumer had noted he works well with Mr. Sanders, who is also a socialist from Brooklyn.

Representative Ritchie Torres, a 32-year-old progressive who captured an open House seat in the Bronx last fall, said Mr. Schumer was the first official to contact him after Mr. Torres won a contentious primary; soon afterward, Mr. Schumer visited his district for a meeting about expanding the federal child tax credit.